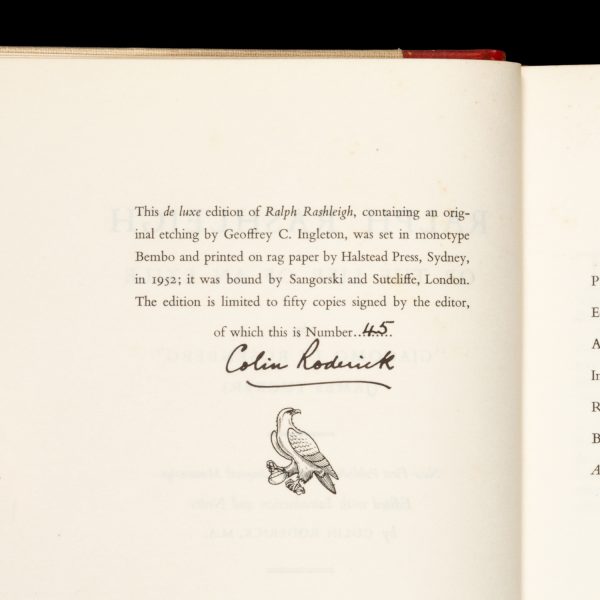 Ralph Rashleigh, or the life of an exile (deluxe edition)

‘James Rosenberg Tucker (1808-1888) was an Australian convict and author from Bristol, England. Under the pseudonym Giacomo di Rosenberg, Tucker wrote his autobiographical Ralph Rashleigh; or, The Life of an Exile in 1844. It was published in a heavily edited form in 1929, and his original manuscript was published in 1952. Tucker was convicted at the Chelmsford Spring Assizes on 3 March 1826 of blackmailing his cousin, James Stanyford Tucker. He was tried before Sir William Alexander, C.B., “On an indictment for sending a threatening letter…accus[ing] of an infamous crime” and sentenced to transportation for life. He was 18 years old at the time. The next year he was put aboard the convict ship Midas, which sailed for Sydney Cove. He arrived in Sydney in 1827 and worked at Emu Plains, New South Wales. Still a convict, he was sent to Port Macquarie in 1844. He was in Goulburn from 1849 to 1853.’ – Wikipedia

‘First published in 1929, Ralph Rashleigh was re-edited in 1952 by Colin Roderick, whose claim for Tucker’s authorship has not been conclusively proved. The case for Tucker rests on internal evidence (the manuscripts are in Tucker’s hand and the alias of Rosenberg is one he had used in 1826) and on the testimony of a resident of Port Macquarie, Charles Edwin Dick (1875-1953), who had in his youth heard of Tucker’s activities from ex-convicts still living there (three other plays were named) and who had in 1889 perused the manuscripts of two other prose works. However, it had also been claimed that Tucker was merely a copyist of works originally composed by another and that the level of education required of the author of Ralph Rashleigh is not to be found in other examples of Tucker’s hand, such as the blackmailing letter of 1826 and official Port Macquarie papers of 1846. Until further evidence is produced, the question of authorship is likely to remain in dispute.

Though their authorship remains in doubt, the works attributed to Tucker occupy a significant place in the history of Australian literature. In particular Ralph Rashleigh, the fruit of a creative talent of high order, is of considerable importance both for its intrinsic literary merit and for its value as a social document.’ – Australian Dictionary of Biography http://adb.anu.edu.au/biography/tucker-james-2746