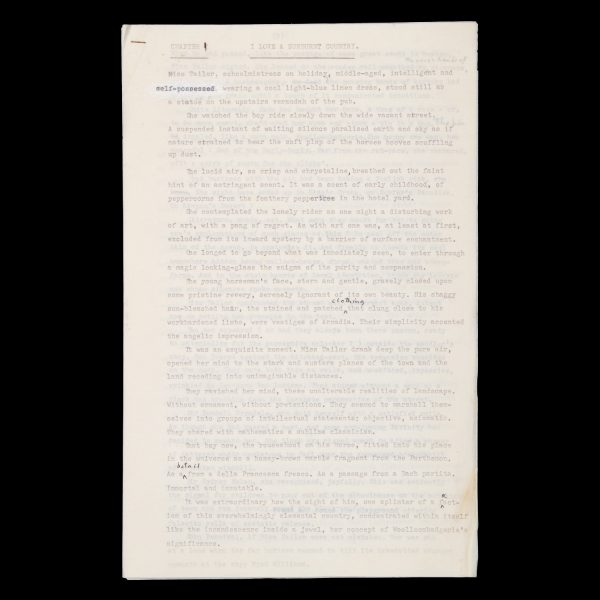 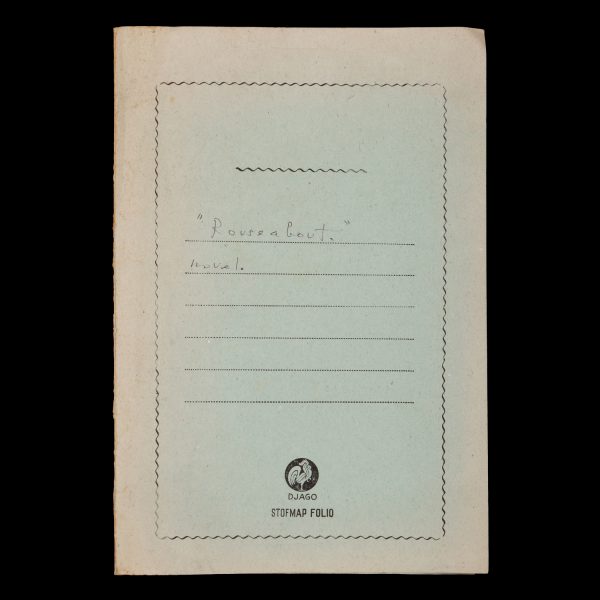 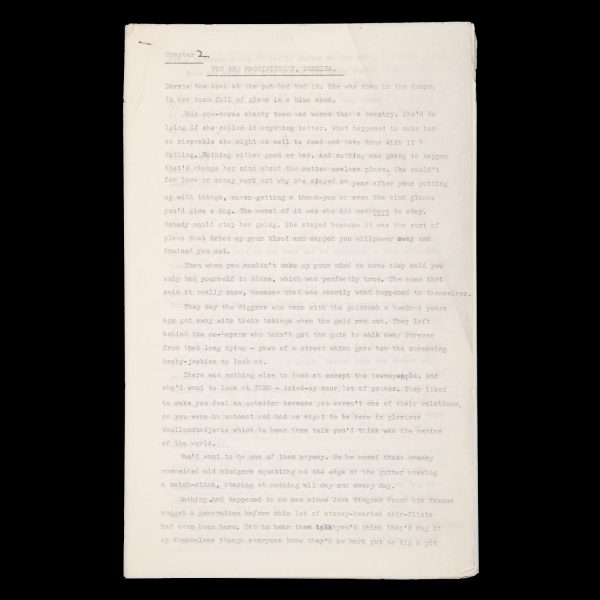 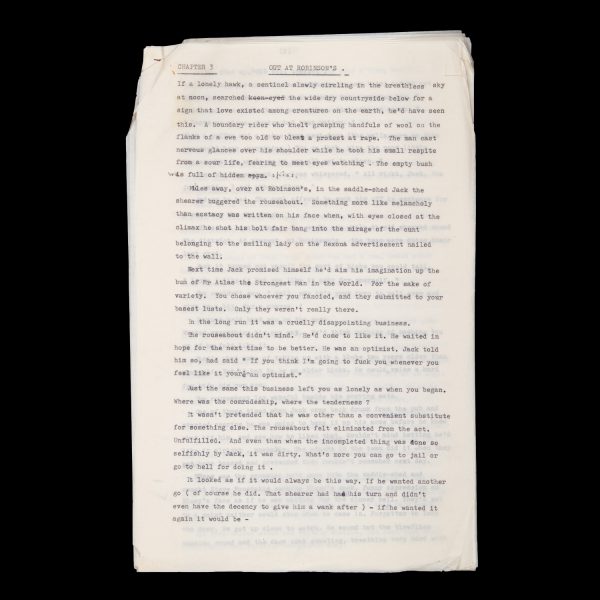 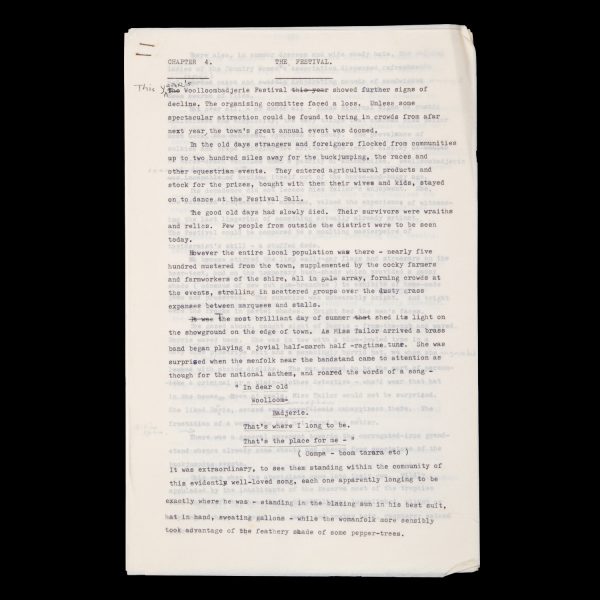 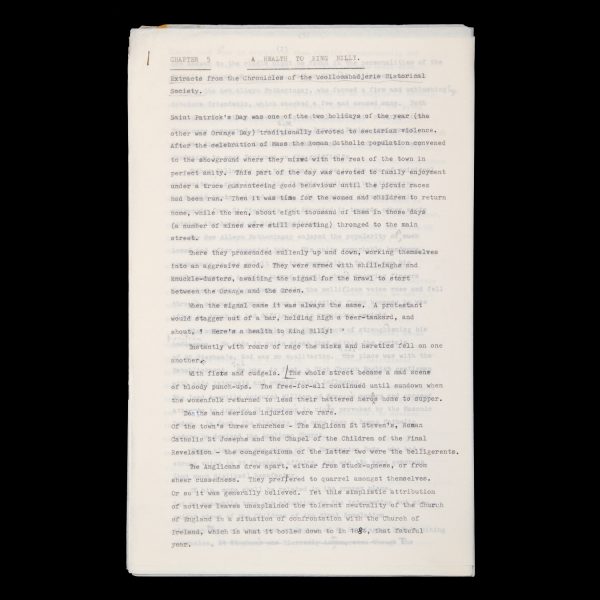 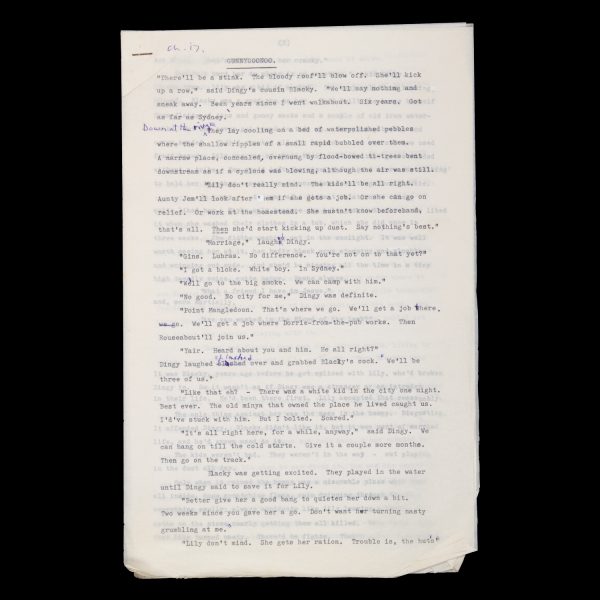 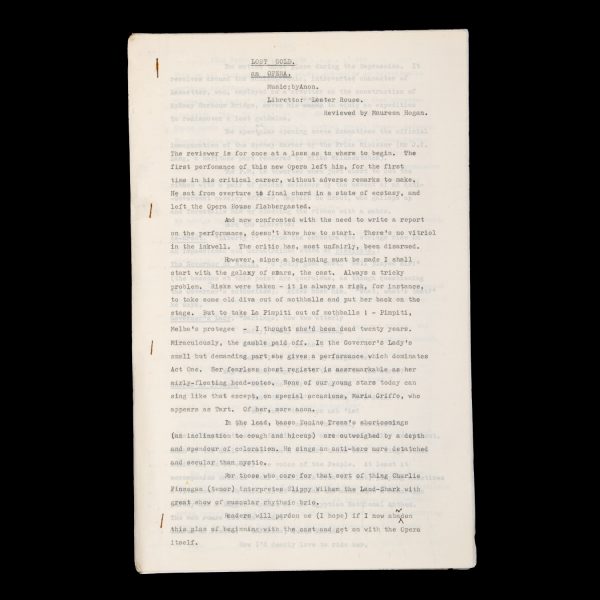 Foolscap folio typescript, approximately 275 pages (double-spaced), gathered into 23 numbered and titled chapters (one with an alternative version), each with separate pagination, stapled at top corners, with Friend’s manuscript corrections and revisions throughout; contained in a manila folder with manuscript title to front in Friend’s hand: “Rouseabout.” Novel.; the paper has an expected amount of toning but is well preserved.

Friend evidently worked on his Rabelaisian novel Rouseabout during the mid to late 1970s in Bali, while living in his house at Batujimbar, Sanur. It is likely that he commenced writing it after the publication of his picaresque novel, Save Me from the Shark (1973), and that he abandoned the project prior to his return to Australia in 1979. We know that he was working on it intensively in 1977, as he alludes to it in his diary entry for 27 August of that year: ‘Attilio is a great boon. There is no other friendship in my life to be compared with his. We are very much in harmony these days, most of which I spend writing (“Rouseabout”) and making one or two head studies of the boys every morning, and reading. Attilio has been cleaning and polishing the carvings in the museum which badly needed attention – and teaching gentle Adjung and one of the others how to carry on the good work. …’  (The Diaries of Donald Friend, IV, edited by Paul Hetherington. Canberra : NLA, 2006).

The novel draws on Friend’s experiences in the 1930s working on the family property Glendon, near Warialda in northern New South Wales. The protagonist is the aptly named Lester Rouse, a shearer’s rouseabout with a voracious sexual appetite who lives in the fictitious outback township of Woolloombadgerie (Warialda?), ‘a one-horse shanty-town worse than a cemetery’. Lester’s sexual encounters with a local Aboriginal man, Dingy Baker, receive lengthy and graphic descriptions. In his own words, Lester is – much like Friend himself – preoccupied with ‘hedonism … pleasure, epicurianism, sybaritism, voluptuousness, high-living, incontinence, debauchery, luxury, orgy, saturnalia … libertinism, animalism, hoggishness, sensualism’ and is a ‘loose-liver, Bacchanalian’ (Chapter 7, page 1). With aspirations to be a poet, he then moves down south to the Big Smoke, where he spends four years writing poetry – and the libretto for an opera – in an attic in Sydney’s bohemian Paddington. Returning to Woolloombadgerie, he renews his relationship with Dingy, and travels with him across country to the coast. In the meantime, in a twist of fate, Lester’s poetry achieves critical acclaim and he becomes world-famous, much to the incredulity of the citizens of Woolloombadgerie.

List of contents, with pagination (note that Friend frequently inserted additional pages at the end of a chapter, resulting in two sets of pagination for the same chapter):