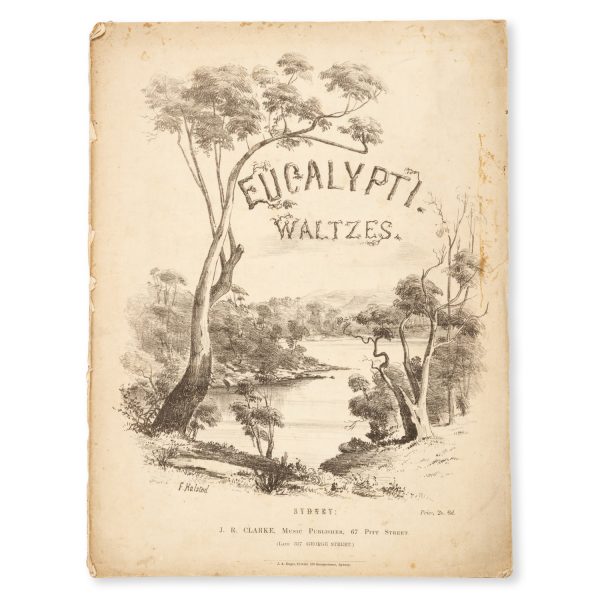 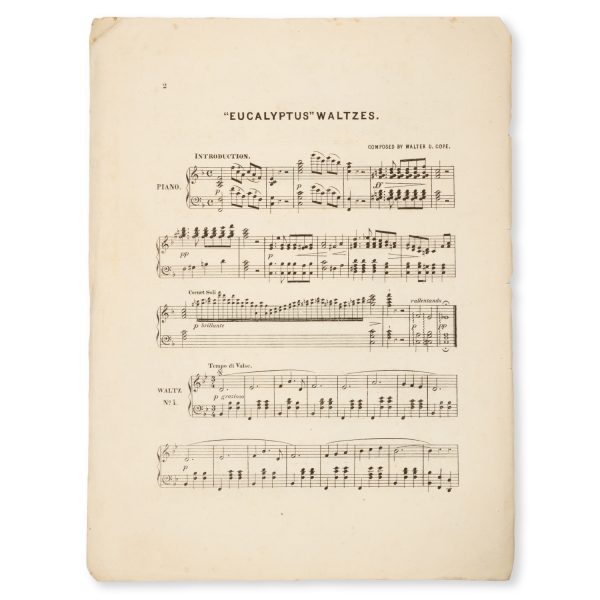 This variant printing of Cope’s Eucalypti Waltzes, with a beautiful lithographed cover by Halsted, appears unrecorded in Australian collections. (NLA and SLNSW hold examples with a different cover illustration and a differently worded title). The music comprises the 16-bar Introduction and Waltzes No. 1 – 3. Beneath the publisher’s imprint the printer’s name is given as J. A. Engel, Printer, 256 George-street, Sydney.

The publication of the NLA and SLNSW variant of Cope’s music was announced in the Australian Town and Country Journal‘s column, “The Critic”, on 7 June 1879:

‘… just been published by J. R. Clarke, of Pitt-street … Another song, made popular by Mr. Beaumont Read, known as “Sweet and Low,” arranged from the original by John, Hill, but to which Mr. Read has written the words under the title, “My Mother’s Gentle Voice” (also with chorus) and “The Eucalypti Waltzes” (why not eucalyptus ?) a lively and well-marked dance piece by Walter D. Cope (with a chromo-lithographic title) have been issued by the same publisher’.

The variant with Halsted’s illustration which we offer here was probably published around the same time as the chromolithographed cover version, since the very specific address information supplied in the publisher’s imprint is identical in both versions: 67 Pitt Street (Late 317 George Street).

There seems to have been little or no research published on the composer, Walter D. Cope. However, there are numerous references to a gentleman of that name in Central West New South Wales newspapers of the 1880s and 1890s. These mention him as being the organist at SS Michael & John’s Cathedral and musical professor at St. Stanislaus’ College, Bathurst, and as a private music teacher in the same town. He appears later to have moved to Forbes and then on to Young, where he became the  proprietor of The Star Hotel.