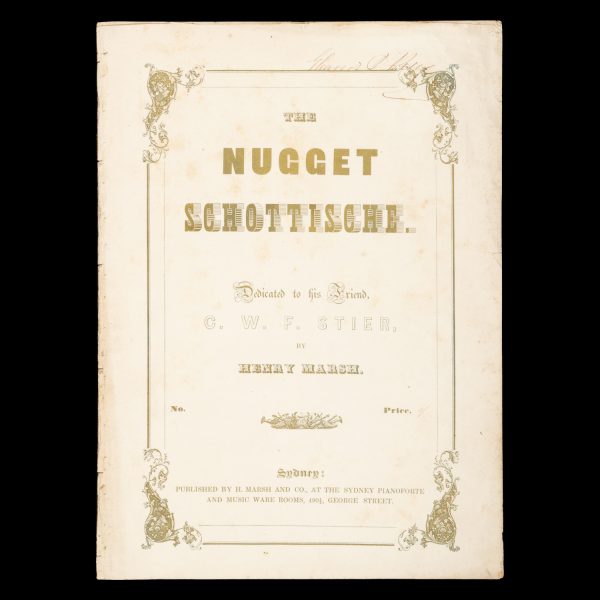 According to Dr. Graeme Skinner (see citation below), this is the first edition of The Nugget Schottische, with beautiful typography in gold and Marsh’s dedication to C. W. F. Stier (master of the band of the 11th Regiment, Tasmania) on the front cover. The sheet music was first advertised for sale in the Sydney Morning Herald on 14 August 1852, making it one of the very earliest pieces of published music inspired by the Victorian gold rush. Examples of the later edition of 1855 or 1856, which was also published by Marsh but with a variant lithographed cover by Allan & Wigley and without the dedication to Stier, are held in the NLA and SLNSW collections.

Trove locates no copies of this first edition.

Henry Marsh, a native of Devon, arrived in Sydney from England in 1849. For a quarter of a century he was a leading figure in Sydney’s music scene, to which he contributed as a composer, pianist, conductor, music teacher, and music publisher. He left New South Wales for California in 1874.

Reference: Graeme Skinner (University of Sydney), “A chronological checklist of Australian colonial musical works 1851-1855”, Australharmony (an online resource toward the history of music and musicians in colonial and early Federation Australia): https://sydney.edu.au/paradisec/australharmony/checklist1851-1855.php; accessed 7 May 2021