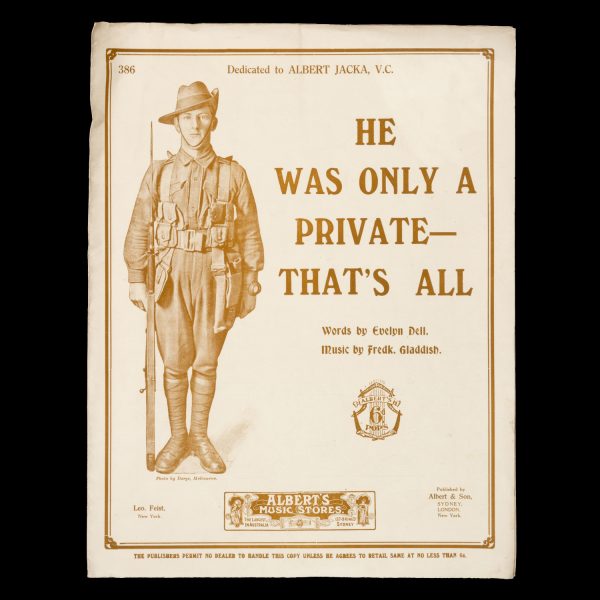 [SHEET MUSIC] He was only a private – that’s all.

This sheet music was reviewed in the Sydney Morning Herald, 25 September 1915, while Australian troops were still at Gallipoli: ‘Words by Evelyn Dell, music by Frederick Gladdish, is dedicated to Albert Jacka, VC. It is a sentimental ballad of the old school, with a suitable change to a more ani-mated and more robust style in the refrain’.

Curiously, the cover is printed ‘Words by Evelyn Dell’, whereas at the head of the music it is stated ‘Words by W.L. Werden’.

‘The full citation for the Victoria Cross appeared in a supplement to The London Gazette on 23 July 1915:

His Majesty the King has been graciously pleased to award the Victoria Cross to the undermentioned Officers and Non-commissioned Officers:-

For most conspicuous bravery on the night of the 19th–20th May, 1915 at “Courtney’s Post”, Gallipoli Peninsula.

Lance-Corporal Jacka, while holding a portion of our trench with four other men, was heavily attacked. When all except himself were killed or wounded, the trench was rushed and occupied by seven Turks. Lance-Corporal Jacka at once most gallantly attacked them single-handed, and killed the whole party, five by rifle fire and two with the bayonet.

Following his VC action, Jacka instantly became a national hero; he received the £500 and gold watch that the prominent Melbourne business and sporting identity, John Wren, had promised to the first Australian of the war to receive the VC, his image was used on recruiting posters and magazine covers….’ (Wikipedia)