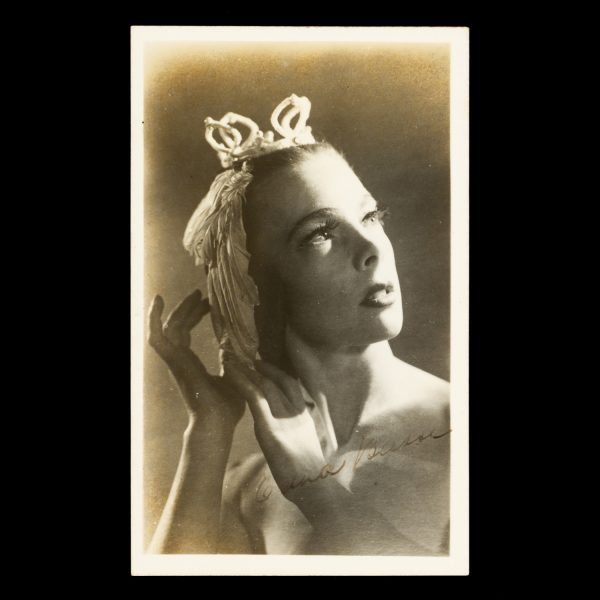 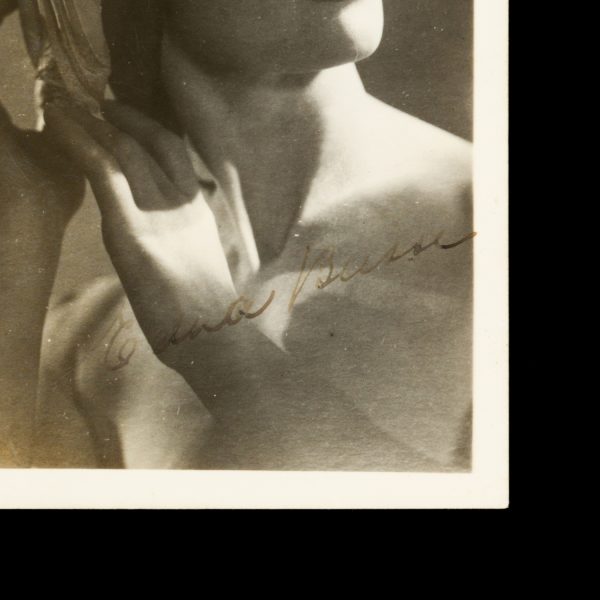 Gelatin silver print photograph, 140 x 90 mm, signed in ink at lower right ‘Edna Busse’; verso with original owner’s annotation in pencil ‘21.11.46’; the print is in fine condition, although the verso is foxed.

A superb signed portrait of Australian dancer Edna Busse, of the Borovansky Ballet, taken in Melbourne in November 1946.

The following obituary for Busse was published in January 2019 by Dancelines:

‘Edna Busse OAM, who played a special role in the history of ballet in Australia, has died at the age of 100. Busse, the first student at the Melbourne studio of Edouard and Xenia Borovansky in 1939, was soon a member of the Borovansky Ballet and became one of the company’s most admired ballerinas in the 1940s and early 1950s.

She explained in an interview published in The Sun, Sydney, in 1944, that she hadn’t seen a ballet performance until 1938 and the following year, aged 20, began training with the Borovanskys, Xenia and Edouard.

As the petite dancer told the reporter: “When I joined M. Borovansky’s school in 1939, I was determined to be a ballerina, so I worked morning, noon and night for five years”.

Although Busse didn’t mention an earlier teacher in the 1944 interview she had also trained with the Melbourne teacher, Eunice Weston, who had her own school and collaborated with the Borovanskys for a short time. Her first leading role was in Xenia’s Pas Classique, in 1940, and by 1944 she danced the role of Odette in Act II of Swan Lake. Busse also made her name in the roles of Swanilda (Coppelia) Princess Aurora (The Sleeping Beauty) and Giselle and in 1951 danced the titular role in The Black Swan, one of Borovansky’s ballets based on Australian stories.

Throughout her career she continued to make costumes for herself and other dancers. As Barry Kitcher wrote in his book, From Gaolbird to Lyrebird, she also made dolls and dressed them in mini versions of the ballet costumes she wore herself.

The beginning of the end of Busse’s Australian ballet career began in 1952 when, after a foot injury, she had an operation in Sydney. After she recovered she travelled to Europe where she danced at the London Palladium then studied with Mathilde Kschessinska a former prima ballerina of the St Petersburg Imperial Theatres before establishing a dance school in Paris.

In an interview for The Argus (Melbourne) after her return to Australia, Busse mentioned she would go back to the Borovansky Ballet but that never happened. In 1956 she danced in The Good Old Days, a Tivoli circuit production, then retired from the stage following a knee injury. After a decade teaching alongside Xenia Borovansky in Melbourne Busse moved to Wagga Wagga in 1967 where she founded a ballet school the following year.

Busse, who had five siblings, was a much-loved aunt and great aunt of her nieces and nephews. She died at the Wagga Wagga Base Hospital on 2nd January 2019.’