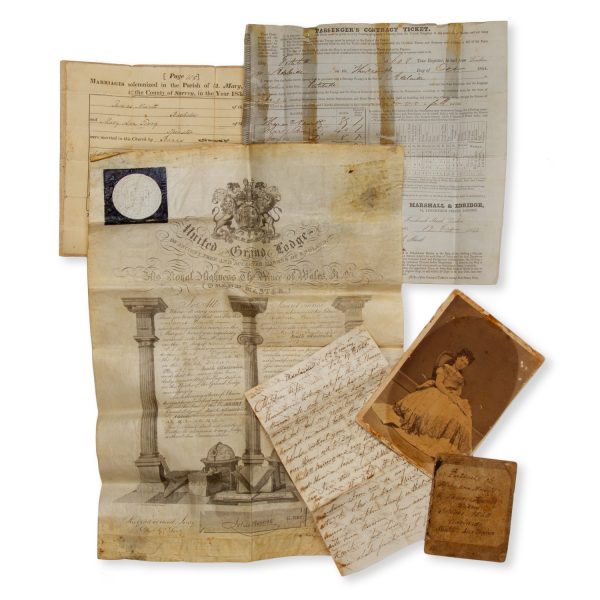 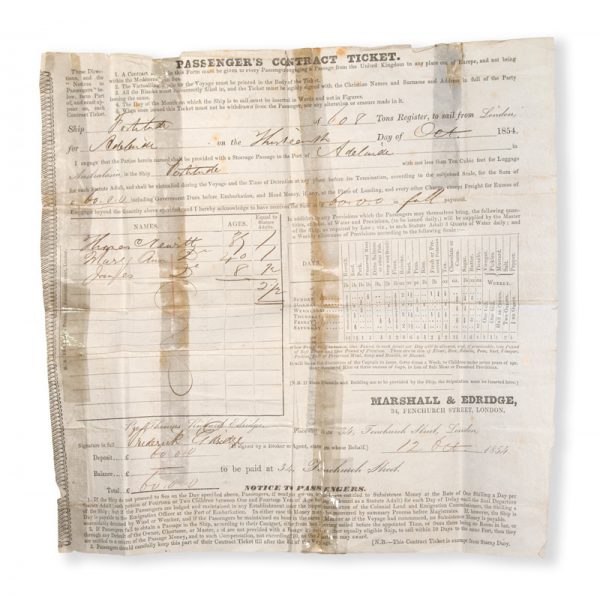 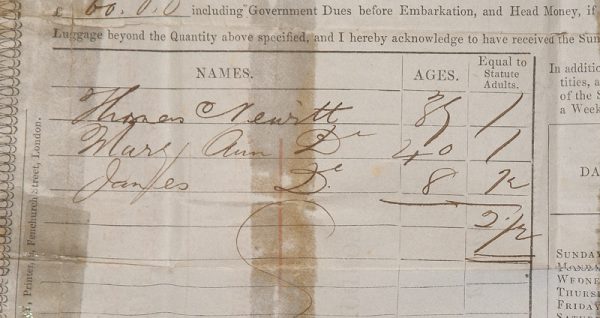 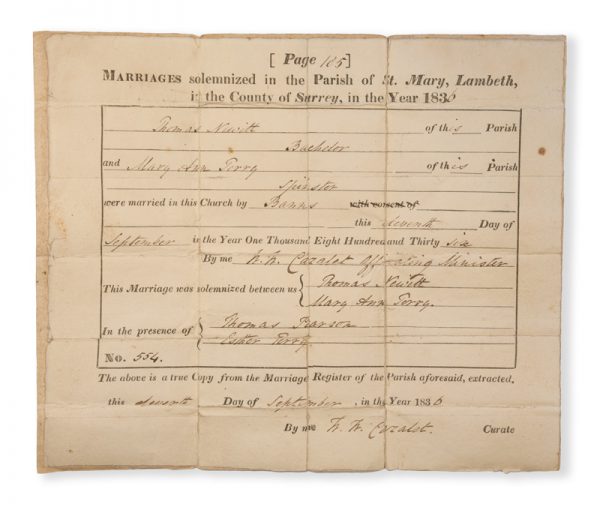 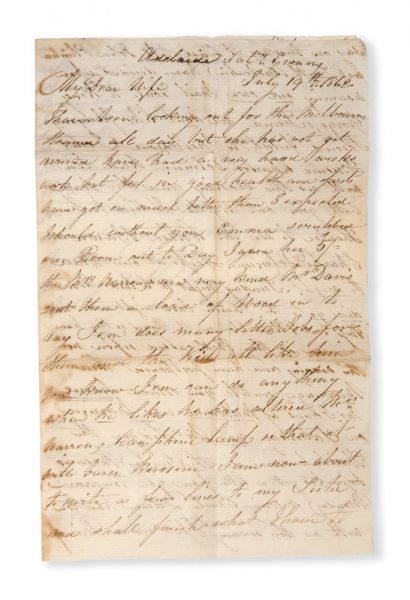 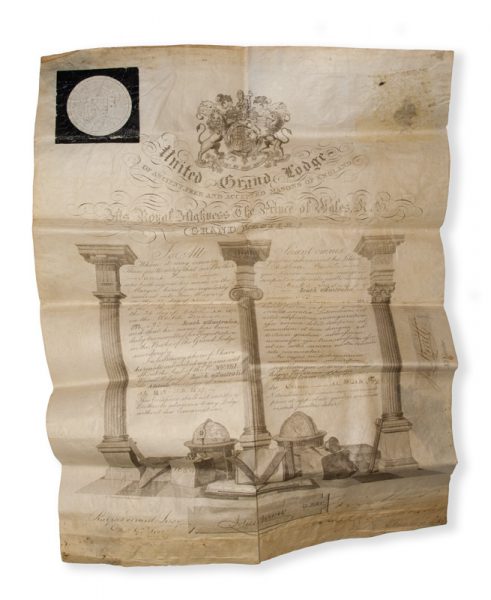 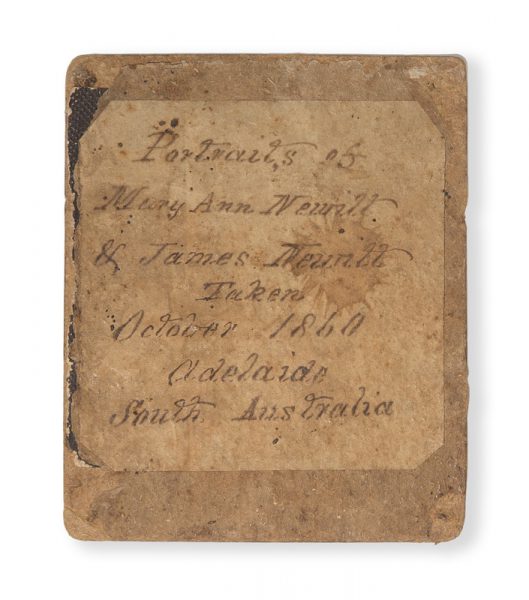 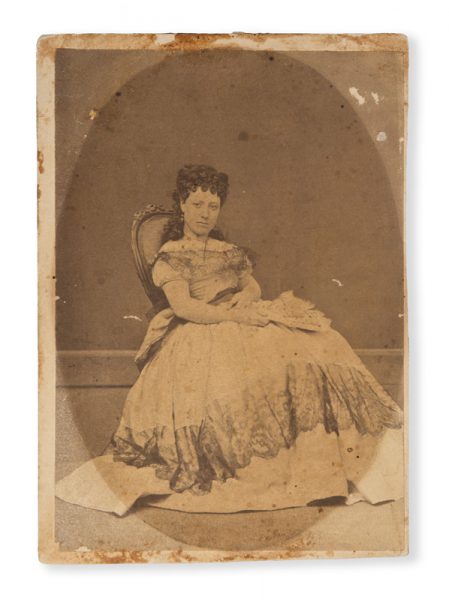 The following group of original documents and photographs relates to the family of Thomas Newitt, who arrived in Adelaide with his family in 1854.

My dear wife, I have been looking out for the Melbourne steamer all day but she has not yet arrived. Have had a very hard week’s work but feel in good health and spirits, have got on much better than I expected I should without you. Emma scrubbed our room out to day, I gave her 5 shillings. The Mrs Warrens are very kind, Mr Davis sent them a load of wood in today. Jem does many little jobs for them and the kids all like him, you know Jem can do anything when he likes. He has altered Miss Warren’s camphine lamp so that it will burn kerosene. I am now about to write a few lines to my Sister and shall finish what I have to say on Tuesday. Please tell John Plaister we (South Australia) have decided upon resuming our own Mail Route to King George’s Sound, we don’t like playing Second Fiddle to Melbourne. Jem’s friend Charles Dolman had tea with us this evening and they have both gone out together, I believe to the Theatre to see the Colleen Bawn. Charles Dolman sleeps at our house to night, Sunday. Sunday night 10 o’clock. Jem did go to the Theatre last night and saw Miss …. Hamilton in the Boxes so they have Squared it. They Both called upon me this evening and have postponed their marriage until you return home. Mr Jones of Melbourne was married on Saturday not Mr Lidgey. The Haribah came in this (Sunday) morning hope to get a letter from you tomorrow (Monday) morning. Charley Dolman had tea with us this evening. I put on a Pair of new Boots this day a very good fit, have only walked as far as Twyford’s to day, have no where to go to so keep my own company. Monday evening July 31st. You will see by the Paper I send with this Mr Martin’s mother died aged 82, he was rather cut up about it, has put on a Black Hatband on his jerry hat (werry ridiculous) I think. Monday evening. I got your long letter this morning, was very glad to find you got there all safe and that you was well. You forgot to send me a Melbourne Newspaper, the Leader. You say it has been very wet in Melbourne, so it has been in Adelaide. The Boy sends his love to you, with my Respects to all your Friends I remain, my dear Wife, your Affectionate Husband, Thos. Newitt. Do not fail to come Home by the Steamer “Lady Bird” if not before. Thos Newitt.

4. Freemason’s certificate, for James Newitt, for admission into the United Tradesmen’s Lodge of South Australia, dated 12 June 1879. Single sheet of vellum (380 x 270 mm), with engraved design and official seal, (some paper adhesions to verso but recto in very good condition).

7. Portrait of a young lady. Circa 1870. Albumen print photograph on original thick card mount (which has been removed from a frame), inscribed in contemporary hand in pencil verso: Australian Photographic Company. 29th….Adelaide. H.J. Thwaites, Manager (This studio operated with Thwaites as manager between 1869 and 1872), and in a bolder hand ‘Mrs. Newitt’; verso also with later pen inscription: Nanna Morphett’s mother. (John Morphett was one of the most significant figures in Adelaide’s early settlement, and his family remained an important and influential one throughout the nineteenth century). This photograph is possibly a portrait of James Newitt’s young wife (James would have been about 25 years of age at this time).