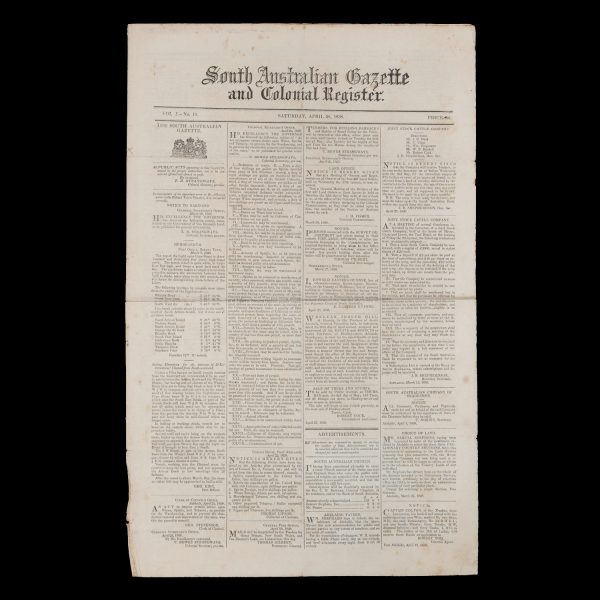 The South Australian Gazette and Colonial Register was first published in London in June 1836 (one issue only), but from June 1837, after its proprietor Robert Thomas had settled in South Australia, it was printed in Adelaide. It later became known as The Register, and folded into The Advertiser almost a century later in February 1931.

This rare survivor, an unbound April 1838 issue, contains shipping news and maritime notices; a government notice regarding duties on wine spirits and tobacco; post office announcements; auction and land sale notices; an editorial attacking Torrens for his ‘slanderous’ comments about Adelaide and the Colony; opinions about South Australia reprinted from other colonial newspapers; court reports; the announcement of the formation of a local police force, and current prices for various commodities in the Colony.

It has been suggested that the first Adelaide issue of 3 June 1837 (Volume 1, Number 2) was a printing of no more than 100 copies (Pitt, The Press in South Australia, 1836-1850). The newspaper was very irregular until January 1838. It was then briefly issued fortnightly until 17 February, when it became  a weekly. By April 1838, then, it appears the newspaper had managed to establish and improve its circulation base. However, it is unlikely that circulation had increased to such an extent that issue Number 19, which was issued less than 11 months after Number Two, was printed in numbers much higher than a few hundred.

‘The Register was conceived by Robert Thomas, a law stationer, who had purchased for his family 134 acres (54 ha) of land in the proposed South Australian province after being impressed by the ideas of Edward Gibbon Wakefield. The first issue (printed by William Clowes & Sons, Duke-street, Stamford-street, Lambeth, London), appeared in London on 18 June 1836 with his friend and partner, George Stevenson, as editor. Thomas embarked for South Australia aboard the Africaine later that year, arriving on 10 November 1836 with his family and equipment to set up a printing plant. It was six months before the first colonial edition of The Register was printed on 3 June 1837 in a small mud hut on Town Acre No. 56 in Hindley Street, near what is now named Register Place. (The colloquialism “mud hut” would seem to be an understatement for a substantial pisé building in which was operated a demy Stanhope press, an ancient wooden press, and racks holding “half a ton of bourgeois and brevier type, a good fount of small pica for printing official documents, and a quantity of general jobbing type” with all the other requirements for editing, setting up, printing and distributing an admittedly small circulation newspaper.)

From the start, the paper asserted a strongly independent stance. Stevenson’s style was vigorous and provocative, making himself and The Register several enemies. His opposition to Colonel William Light’s choice of site for the new capital and J.H. Fisher as Resident Commissioner, led them and others to found the Southern Australian in direct competition with The Register. The paper’s antagonism of Governor Gawler led to The Register losing government business notably the South Australian Government Gazette. The printers Thomas & Co. had disengaged themselves from editorial content in June 1839 in a vain attempt to protect their monopoly and lost about £1,650 a year. His protest that he was authorised by the British Government to do its printing failed and, insolvent, he sold the paper for £600 to James Allen (previously editor of the South Australian Magazine) in 1842, as Stevenson withdrew from journalism.’ (Wikipedia)