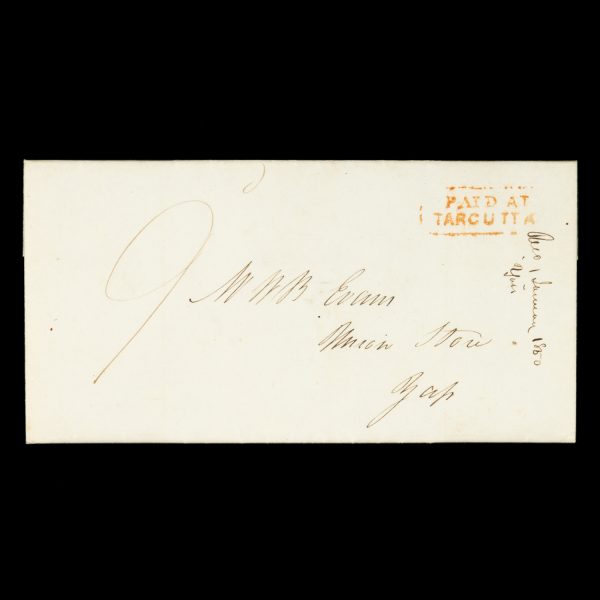 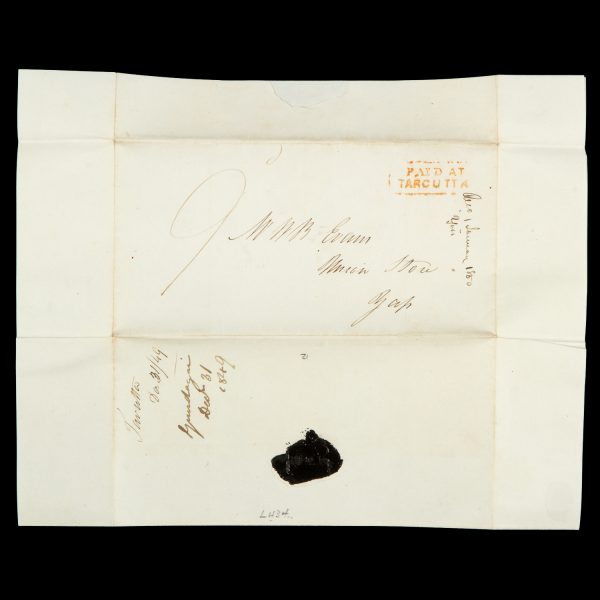 Entire letter. Folding letter sheet, 230 x 180 mm, high quality paper with embossed paper mark ‘Superfine Satin’; [1] page, manuscript in ink; headed ‘Tarcutta, Dec. 31/49’, the letter is addressed to ‘W. N. B. Evans, Union Store, Yass’, and is signed at the foot ‘Thomas H. Mate’; the outer side with rare boxed PAID AT TARCUTTA cancel in red, and endorsed by Evans ‘Received 1 January 1850 Yass’ (the travelling distance from Tarcutta to Yass is 150 km!!); on the back is a transit notation in ink ‘Gundagai Decr. 31 1849’ and intact black wax seal with impressed monogram ‘THB’; original folds, crisp and clean.

An unpublished piece of correspondence from Thomas Mate, pioneer grazier in the Tarcutta district and later prominent Albury merchant, to William Evans, a Yass storekeeper whom Mate would appoint as manager of the first of his own Albury stores in 1850.

Transcript of the letter:

‘Dear Sir, I enclose herewith your copy Indent thinking you may require it before you leave Yass. I hope to leave here this day week the 7th Jany., if all be well, when I hope you will be prepared to accompany me to Sydney. I should prefer going down per gig, but I am afraid time will not allow it. With best respects to all friends, I am, yours faithfully, Thomas H. Mate.‘

‘Thomas Hodges Mate (1810-1894), grazier and store-keeper, was born on 5 April 1810 at Canterbury, England, son of Thomas Mate. At 23 he migrated to Sydney where he stayed for some months and then moved to the country to gain pastoral experience. On 8 February 1836 at St James’s Church, Sydney, he married Maria Bardwell.

Mate bought a few sheep from H. H. Macarthur and in 1837 took up a run on Tarcutta Creek. His primitive homestead was half-way on the track between Sydney and Melbourne so he added an inn and store for travellers. Though the Aboriginals were then very numerous he avoided conflict by his kindness and faithful promises. By 1849 the Tarcutta school had sixteen children, four of them Mate’s, and the station was well stocked with sheep and cattle. In 1850 he decided to open a general store at Albury. The town was then very small but it grew rapidly after gold was discovered and river transport was opened. As his emporium prospered he expanded as a wholesaler and had a bonded store. At first his store housed the post office and after 1858 a telegraph office but both moved to other premises in 1862.

Prominent in Albury’s growth, Mate served on the Albury Hospital Committee and chaired a banquet to celebrate the opening of the bridge across the Murray on 2 September 1861. In 1859 he had contested the Hume electorate; as a squatters’ candidate holding land on the Murrumbidgee and near Albury as well as Tarcutta he was beaten by three votes chiefly because floods prevented many country electors from voting. He won the seat in December 1860 and held it until November 1869. He sought in vain to confine John Robertson’s free selection to settled areas instead of the whole colony but in 1866 succeeded in initiating a bill for preventing the careless use of fire which became law in April. As a supporter of the Martin ministry he helped to pass the Public Schools Act in December and was gazetted a magistrate of the territory.

From 1864 Mate was involved in much litigation mostly over land. His major holdings were Kulki near Urana and the Tumberumba and Brae’s Springs runs near Albury and Tarcutta, which were managed by his sons. His store continued to expand and as mayor in November 1880 he was chosen to open the Albury market yards which soon attracted store cattle from all north-eastern Australia, especially after Victoria raised its stock tax. Predeceased by his first wife, Mate died at Manly from pneumonia on 22 July 1894 and was buried in the Anglican section of Waverley cemetery. He was survived by his second wife Florence, née Brown, whom he had married at Albury in 1882, and by three sons and four daughters of the first marriage and one daughter of the second. His probate was sworn at over £13,000. His firm is still the largest in Albury.’ (Cliff Chamberlain)