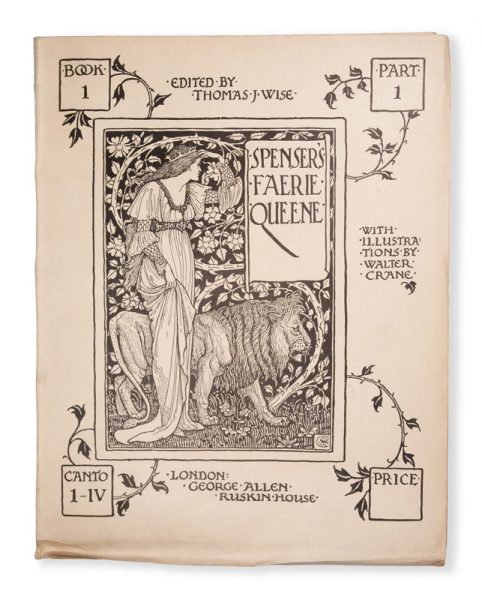 Edited by Thomas J. Wise. London : George Allen, 1894-97. Quarto, nineteen parts in original illustrated wrappers, illustrated by Crane throughout. The deluxe edition printed on Japanese vellum, limited to 28 copies of which 25 were for sale. A standard edition was also published. A very fine set with some creasing to the lower yapp edge. Originally in the collection of the Brooklyn Public Library (deaccessioned, without any ex libris markings at all), in custom folding cases which while now split have housed the set in exceptional condition. Magnificently illustrated by Crane and a highpoint of Arts and Crafts publishing. Masse p. 47.

Published by Edmund Spenser in two parts, in 1590 and 1597, The Faerie Queene is the longest poem in the English language. An allegorical epic inspired by the works of Virgil, it parallels the virtues and chivalry of the knights of the Arthurian realm with the morals and incorruptibilty of the Tudor dynasty of Spenser’s day, and so for obvious reasons the poem was received extremely favourably by Queen Elizabeth I (on whom the Faerie Queene is modelled) and her court. As Spenser fell under the spell of Mediaeval romances in crafting his poem, employing a deliberately archaised language in order to create a magical yet faux atmosphere, so Walter Crane became similarly entranced by the stories of noble deeds, heroism and chivalry which are told in each of the epic’s books. Indeed, the subject matter of Spenser’s poem was perfect for writers and artists of the late nineteenth century Gothic revival, and although it inspired a plethora of illustrated editions around this time, either complete or abridged, it is Crane’s collaborative effort with Wise, particularly in this deluxe edition of such rare beauty, that is generally accepted as the nonpareil illustrated edition of The Faerie Queene.