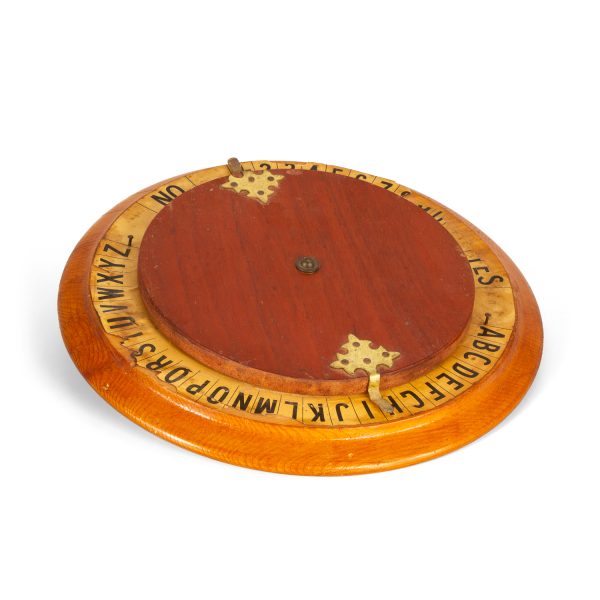 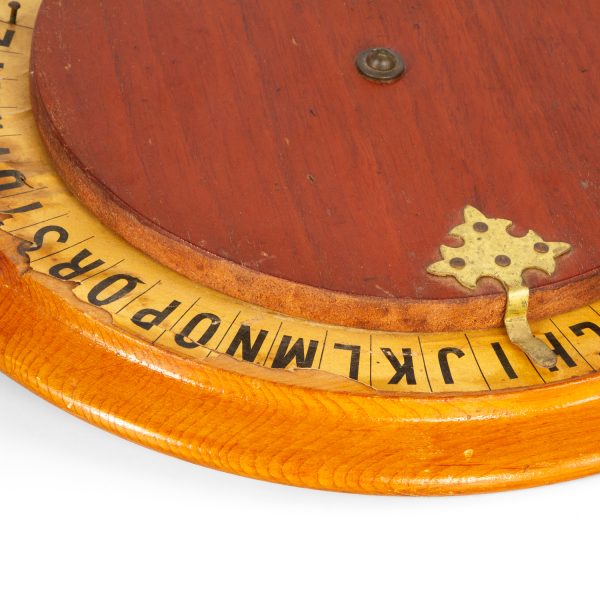 [SPIRITUALISM] The Psychograph, or Dial Planchette, of Especial Use in the Home Circle.

[Berlin Heights, Ohio : Hudson Tuttle, probably between 1890 and 1910]. Circular wooden dial, diameter 200 mm, with two opposing brass fittings at its edge; the dial is mounted on a solid wooden base (not cardboard, as in other examples), diameter 280 mm; around the dial is a circular border of lacquered heavy paper stock which is printed with the letters of the alphabet, the numbers 0-9 and the words “YES” and “NO”; the paper is heavily toned and is starting to lift from the base in places, with partial loss to a few letters and numbers; the underside of the base still has the original pasted-down “Directions” sheet (minor insect damage and staining), which includes testimonials for the Psychograph by Captain D. B. Edwards and Dr. Eugene Crowell (as in other known examples) but does not contain Tuttle’s address or a price (making this sheet a unique variant).

An extremely rare survivor from the golden age of Spiritualism, one of only a handful of known extant examples of American writer and publisher Hudson Tuttle’s spirit board for use in seances, The Psychograph, or Dial Planchette.

The following short essay on Hudson Tuttle and spiritualism is taken from the excellent Mysterious Planchette blogspot, written and curated by researcher Brandon Hodge (Austin, Texas):

‘Hudson Tuttle (1836-1910) is one of the most fascinating personages of the Spiritualist movement. Born October 4, 1836 in Berlin Heights, Ohio, Tuttle was surrounded by the ardent religious fervor of that region. He became a skeptic of established religions at a young age when his prayers to God to mend a broken pitchfork-and spare him a beating by his father-went unanswered. Tuttle became involved in Spiritualism during the early stages of the movement, attending a seance hosted by a Congregational minister seeking to investigate the spirit knockings recently popularized by the Fox Sisters for himself. According to accounts, Tuttle entered a trance-like state and produced automatic writing, and spirit raps spontaneously erupted in his presence. So began his long association with his “spirit communicators” or “superior intelligences:” intangible entities who he claimed imparted fantastic knowledge in him.

The presence of these ghostly tutors might have explained much, for Tuttle claimed to have attended school only “eleven months in all,” and yet the supposedly uneducated farm boy produced great volumes of written work in his lifetime. He credited all to his spiritual communicators. His published theories were espoused by F. C.L. Buchner, and no less a personage than Charles Darwin quoted Tuttle in The Descent of Man! His wife, Emma Rood Tuttle, was no less prolific, and was an accomplished composer, lecturer, children’s lyceum promoter, and writer.

His penultimate work, entitled Arcana of Nature, was began when Tuttle was only 18, but his incorporeal tutors-among them the deceased French naturalist Lamarck and Alexander von Humboldt-supposedly commanded the first just-completed manuscript destroyed. They claimed it necessary to “weed out the imperfections” that the medium had introduced in his translation from the spirit world. Finally published in 1859, the book is a fascinating pseudo-scientific work written without the aid of a library, reference books, or even the benefits of an education, if Tuttle’s claims are to be believed.

The work is no less than the attempt at the complete origins of man and the cosmos from astronomic, philosophic, and anthropologic viewpoints. It is amazing in its scope, and Tuttle even takes a stab at bizarre theories of evolutionary biology at a time before Darwin’s On the Origin of Species, which would be published the same year. It does, at times, rely on crackpot theories popular at the time, such as phrenology and early eugenics, which can give some sections an overtly racist tone from a modern viewpoint. But the work is fascinating, if for no other reason that it came from the mind of Ohio horse breeder, but it still stands as an amazing testament to Hudson Tuttle’s incredibly prolific life.

Some of Tuttle’s other works include Scenes in the Spirit World in 1855 (later published in England under the title Life in Two Spheres), Mediumship and its Laws in 1890, and Stories from Beyond the Borderland in 1910, among many others. Two Worlds Publishing produced many of his books, including Arcana of Spiritualism in 1900, though Tuttle also ran his own publishing company from his Ohio home in later years, producing not only his books, but also his dial plate Psychograph.

By the early 1880s, there was a shortage of options to writing planchettes. Wagner’s own psychograph – patented but not likely manufactured – was decades gone. Isaac Pease’s “Spirit Telegraph Dial” was another relic from 30 years previous. Dr. Robert Hare’s experiments with his Spiritoscopes were remembered and even invoked in Tuttle’s own invention’s advertisements, but were never made on a commercial scale. And Becker’s pointer board, patented in 1880, was on the right track, but doesn’t seem to have ever been produced.

So it was that Tuttle stepped in to produce an inexpensive spirit communication tool as an alternative to the planchette, a bit ironic given his beginnings as an automatic writer. This device found form in his “Psychograph.” First offered in the early 1880s, the board seems to have been quite a success on both sides of the Atlantic, with the veritable juggernaut of Two Worlds backing him in England, and his own reputation and name promoting the device in the States. It should be noted, however, that the form of the board closely resembles the Holmes Alphabetic Planchette available in the late 1860s, and given Tuttle’s prominence and long tenure in the Spiritualist movement, it is unlikely he was unaware of the New York board.

The Psychograph is a 9-inch square of stout cardboard, covered in paper carefully glued and folded around the back corners. The frontpiece is printed with an intricate square border around a circular dial consisting of the alphabet, the numbers 0-9, and the phrases “Yes,” “No,” “Good Bye,” and “Don’t Know.” A thick wooden post, about 2-inches in diameter, is glued to the board’s center, and has a corrugated groove for retaining ball-bearings. A 5-inch circular wooden disk is screwed to the top of this, sandwiching the ball-bearings and allowing free rotation of the curved brass indicator that sprouts from the disk’s bottom. The back paper covers the folds of the paper frontpiece, and its appearance differs in all 3 known examples, but all contain instructions of varying complexities.

Due to the dial plate’s cardboard construction, few seem to have survived to the present day, and all 4 known survivors differ slightly in appearance. In the two examples we can directly compare, the wooden disk and central post are identical, though the front border’s intricacy and dial’s letter fonts differ. The way in which the paper is folded around the board’s back is identical, however, though the instructions vary between relatively short, to long and ponderous, with endorsements from such luminaries as Captain D. B. Edwards and Dr. Eugene Crowell, with at least one nod to Professor Hare. The price varies from $1 to $1.25, and was sent postpaid from Tuttle’s Berlin Heights address.

Hudson Tuttle took his Psychograph very seriously, as you can tell from the following explanation from the December 3, 1887 edition of the Religio-Philosophical Journal:

“The instrument is not a mere machine that will grind out communications; it is only a delicate means. It must be used intelligently. The sitter should sit with reverent seriousness, and undivided desire, and at fixed times, and not become discouraged if many sittings pass without results. There is scarcely a family in which at least one sensitive or mediumistic person may not be found, and the discovery of such sensitive members and their development, is the desirable office of the Psychograph. “

Collectors are faced with something of a conundrum in an advertisement discovered in a 1949 edition of the Psychic Observer magazine. The ad reveals that in that year, the magazine’s publisher offered replicas of the Tuttle Psychograph for sale. It is unknown just how exact these replicas are, if they reproduced the back paper instructions exactly, or if they replaced the Tuttle address by branding them with the magazine’s own moniker. All 4 surviving Psychographs carry Tuttle’s address and original prices, and until one of these replica items is either discovered for comparison, or the extent of the company’s reproduction uncovered, we have some lingering doubts as to dating and identifying these marvelous dial plates.‘

Below is a brief article on Tuttle’s Psychograph, also taken from the Mysterious Planchette blogspot (http://mysteriousplanchette.blogspot.com/2014/03/new-improved-lost-tuttle-psychograph.html):

‘As far as my records show, there are six known surviving Tuttle Psychographs. First invented by Hudson Tuttle around 1880, his Tuttle Publishing Company produced his “dial planchette” in an extraordinarily long run, as it was still advertised as late as 1915–five years after Tuttle’s passing. And we know that the Psychic Observer offered Tuttle Psychographs for sale as late as 1949, though whether these were leftover/NOS at the time or newly-made replicas still remains to be seen.

The most unusual thing about the six specimens is the tremendous amount of variation between them. I’ve spent months staring at the pictured Psychographs and the other three known survivors, and rely on a set of distinguishing markers in an attempt to trace the device’s evolution. There’s the font, which differs wildly from the smaller, more precise font of the Hodge specimen to the wide, bold font of the Orlando specimen with its unique sweeping tail on the “A.” There are variations of the circle on which the letters sit: either one line or two lines, but at least two specimens with breaks in the printing that might serve to assign them similar dates. Some specimens have other weird print variations–the Psychic Observer ad, for example, shows unusual spacing between “W  XYZ,” and the “Don’t Know” is italicized and misaligned–properties which show up on at least one recently-discovered surviving specimen. There’s an inverse-printed model with dark paper and light letters, and variations in the wood and shape used for the wheel. And the comparative starting point of the “A” relatively to the board’s bottom is always different between models–9-o’-clock on one, 10-o’-clock on another. Such variations are easily picked out in the pictures above, and there are many.

And don’t even get me started on the instructions printed on the boards’ backs. They differ way more wildly than the front print, and present a whole new set of clues and comparisons to analyze.’