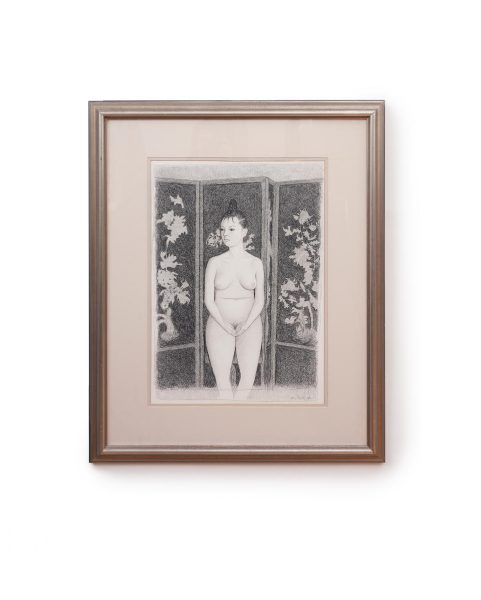 Widely considered to be one of Australia’s great intellectual painters of the twentieth century, John Brack completed a number of critically acclaimed series of the female nude, which ‘remained his touchstone with one of the great traditions of art, a testing ground to which he could constantly return’ – Grishin, The art of John Brack, vol. 1, p. 156.

Standing Nude, 1980, is from a major series of female nudes executed in oil, conte and lithograph between 1979 – 1981, during a hiatus Brack took while working on his epic pencil Battle series. The works from this series of nudes are characterised by his models set against a stark, urban interior, and posed somewhat awkwardly, as if deliberately constructed to disconnect the subject against their environment. In 1981, Brack’s large scale conte drawings would be reworked by the artist as lithographs for publication in the deluxe edition John Brack Nudes (Melbourne : Lyre Bird Press, 1981), drawn again on stone and printed for the book, where Standing Nude would serve as the opening image for the series.

When considered as a series, the meaning of Brack’s uneasy forms become apparent. In his introduction to the series in John Brack Nudes (1981), Gordon Thomson writes ‘… these are all about how it is, the human predicament … There are always things of elating beauty, but they are always surrounded by restraints. The room is isolation. The space is ample, but not limitless. There are confining walls, at strange angles, and wiry restricting lines, rendezvous promised, but evaded …we feel some consolation for the harsh juxtaposition of the apparently simple human form with the apparently much more complex design of the mat, and all that such antinomies imply’.

In Standing Nude, 1980, the exquisite, natural beauty of Brack’s nude model is gracefully staged against a elaborate Chinese screen, and whereas each element stands alone as form of beauty, there is a subtle disconnect between the two. Neither the screen nor nude are revealed in their entirety, and like other works in his series, Brack constrains his subject against the imposing architectural elements of the room. The viewer is left to wonder at what the model’s eye is resting on, and what is veiled behind the screen, extending the scene beyond the limits of the drawing. Clearly skilled as an artist in capturing beauty, Brack’s works also contain an enigmatic subtext, which heightens the interest level in what could otherwise be a static piece.

Standing Nude, 1980 is a finely drawn, large scale, finished work from the height of the artist’s career. It is highly representational of the artist’s own exploration of the nude, a work which is refined in both composition and execution.

Rex Irwin Art Dealer, Sydney
Private collection, Sydney, acquired from the above in 1984, as Study for P4