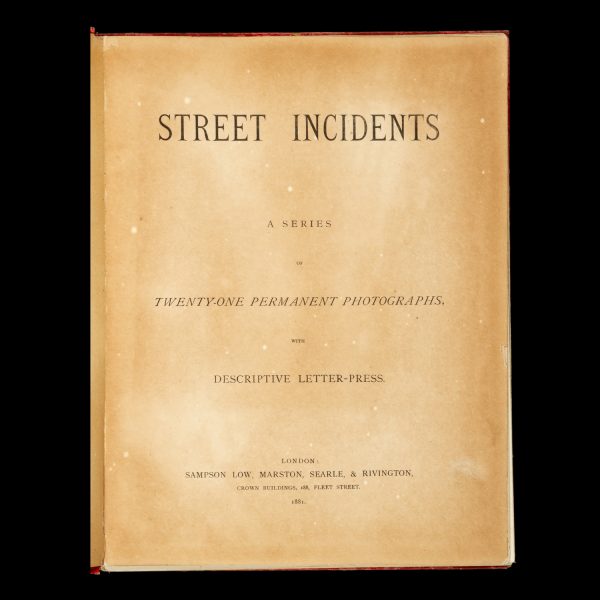 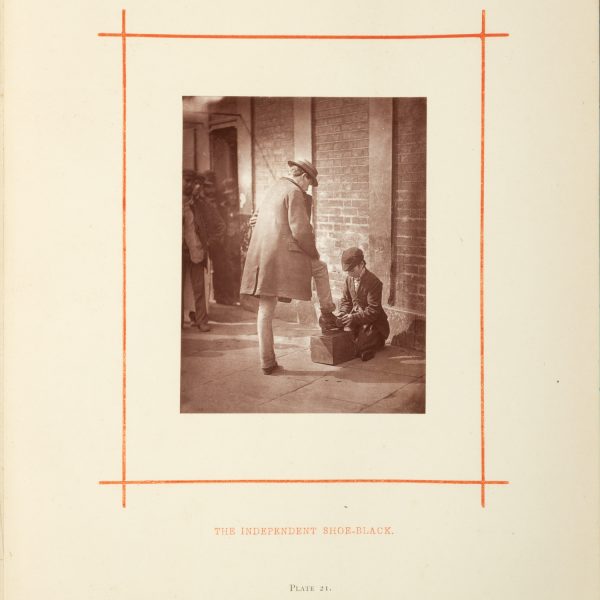 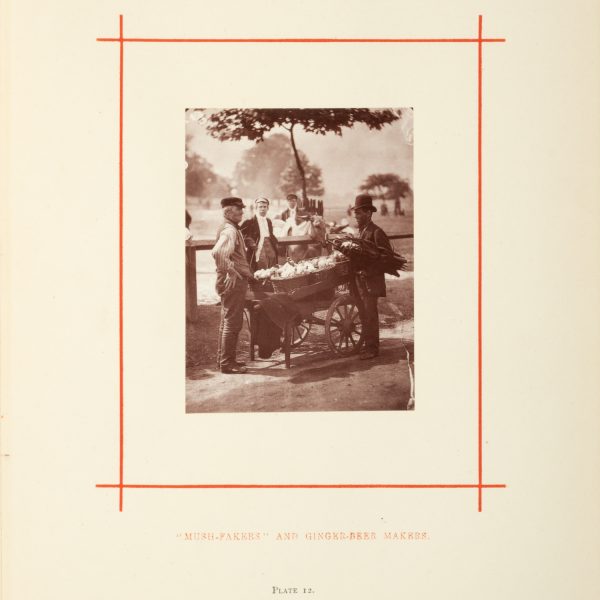 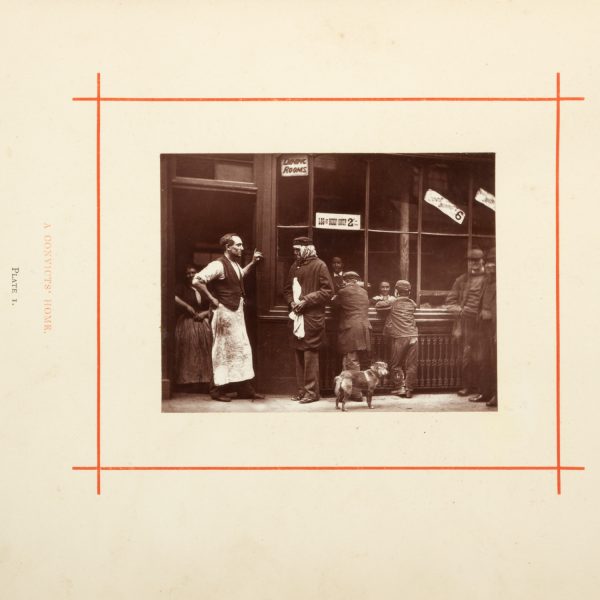 London : Sampson Low, Marston, Searle & Rivington, 1881. Quarto (285 x 220 mm), publisher’s pictorial red cloth stamped in gilt and black (boards with light staining and flecking, spine sunned and flecked), original patterned endpapers, pp [2], [1]-100, with 21 original woodburytypes from Thomson’s original dry-plate negatives, each with printed caption and red ruled border, mounted as individual plates on the rectos of the leaves between pages 3 and 43; all of the woodburytpes and their page mounts are in superb condition, without fading or foxing; title page and last page of text with browning (as in other examples), upper margins of a few text pages with mild insect damage, hinges cracked but holding.

The first use of published photographs as social documentary.

In 1877-78 John Thomson had first collaborated with radical socialist writer Adolphe Smith Headingley in creating 36 photographs accompanied by textual commentary for the monthly parts of Street Life in London. Of this collaboration John Hannavy, in The Encyclopedia of Nineteenth-Century Photography, wrote:

‘The bringing together of the photographer John Thomson and the left-wing political writer and activist Adolphe Smith Headingley to work on the project which resulted in Street Life of London (1877-78), was a logical progression from the collaboration between Richard Beard and Henry Mayhew more than two decades earlier on Mayhew’s study of London Labour and the London Poor. Headingley, who wrote under the name of Adolphe Smith, was relatively unknown when he and Thomson collaborated on Street Life and the pairing was an inspired one. Both men had sympathy towards the living and working conditions of their subjects….’

In 1878 the twelve monthly parts of Street Life were reissued in book form; in 1881 an abridged version, Street Incidents, was published which retained the 1878 text but included only 21 of the 36 photographs (the present edition). Street Incidents was issued essentially as a new work, and the publishers do not credit Thomson as the creator of the strikingly sharp images photomechanically reproduced by the Woodburytype process from the photographer’s original dry-plate negatives.

The taxonomic approach taken by Thomson to his work can almost be considered scientific: like an anthropologist, he was concerned to classify and accurately capture what he referred to as “the true types of the London poor”. Smith (Headingley), with his evocative contextual essays based on interviews with the subjects, brought the element of reformist zeal to the equation.

“A pioneering work of social documentation in photographs and words … one of the most significant and far-reaching photobooks in the medium’s history.” (Parr & Badger, The photobook : a history, I, 48)