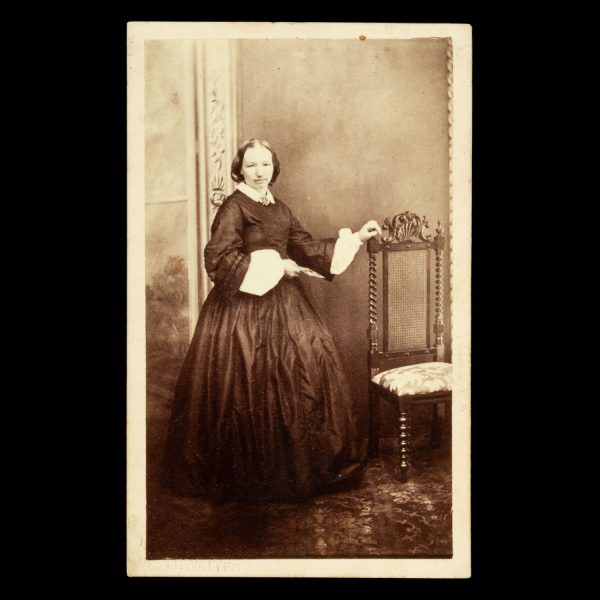 This fine carte de visite studio portrait came from a Tasmanian album associated with the Young and Bunster families of Hobart. We believe it to have been taken by Walter Thwaites in his Macquarie Street studio between 1862 and 1865. Thwaites was an enigmatic character, and much travelled!

‘W. W. Thwaites (1814-1888) … miniature painter, engraver, professional photographer and public servant, was born in London, son of William Walter Thwaites, an amateur painter who exhibited a miniature of Miss Sims at the Royal Academy in 1819 (from 69 Great Prescott Street) and Le Chapeau Noir at the Society of British Artists, Suffolk Street in 1826 (from 14 Bedford Place, Commercial Road, London). By profession his father was a civil engineer and, with his cousin Sir John Thwaites, was responsible for constructing the Thames Embankment; his mother was the daughter of Captain Maitland of the Royal Navy. Reputedly educated at Rugby, Thwaites left England in 1834 to work in Sydney as a miniature painter. In August 1836 he advertised in the Australian and the Commercial Journal that he had moved to 1 Hunter Street, Sydney, ‘where the orders of those that shall honour him with a call will be most punctually attended on the most reasonable terms’.

Thwaites married Jane McLean in Sydney on 13 September 1839. The following year their son, Walter William McLean Thwaites, was born. In 1842 they moved from Surry Hills to New South Head Road, where on 14 August Jane gave birth to twins, Isabella C. and Hector J. Thwaites; Sophia Jane followed c.1846. The family seems to have been living on a farm at Botany in September 1842 but by 1847 W.W. Thwaites was back in business as a miniature painter of Madeira Place, Devonshire Street, Sydney. A small, undated watercolour portrait of Susannah Bedwell is held by the Mitchell Library, which also holds copies of W. W. Thwaites’s undated engraving of St Peter’s Church of England, East Maitland (NSW). A lithograph after an equestrian portrait of Mr Henry Reeves, clerk of the (race) course and proprietor of the Fitzroy Hotel at West Maitland, ‘drawn by W.W. Thwaites from life’, appeared in Heads of the People on 2 October 1847 so he must have worked in the Maitland area for a time.

During the 1850s Thwaites abandoned art and worked in the Auditor-General’s Office. He evidently learnt photography during this period. When he re-appeared as an artist in the 1860s, it was as a professional photographer as well as painter – in Tasmania. ‘W. Thwaites’ was listed as an artist and photographer of 128 Liverpool Street, Hobart Town in 1861. In February 1862 he was advertising his Macquarie Street studio, two doors from the Bank of Van Diemen’s Land. Rumoured to have taken nude photographs of ‘a Woman of the Town’ (a genre unrepresented in known colonial photographs), W. Thwaites placed an advertisement in the Hobart Town Advertiser in September 1862 vehemently denying ‘ever having disgraced my Establishment by any such proceeding’. The story does not seem to have damaged his reputation. A few months later Fanny Maria Davenport, daughter of the Anglican archdeacon, wrote in her diary that her brother Arthur had had his likeness taken by Thwaites on 22 December soon after Thwaites had received a consignment of new photographic equipment via the Percy.

In February 1864 Thwaites was writing to the Hobart Town Council complaining of water charges. He apparently left the colony soon afterwards, re-appearing in South Australia in 1865 with his two sons, both now practising as photographers too. While he and Hector worked in Adelaide (under Walter’s name), Walter William junior covered the country towns. Then they all went to Western Australia in the Sea Ripple, arriving on 19 January 1867. The following month the Perth Inquirer was carrying Thwaites senior’s advertisements announcing his arrival from Adelaide and stating that he would be visiting the districts of Newcastle, Victoria Plains and Gingin, ‘having with him the most approved apparatus for taking Views and likenesses’. Thwaites added that he could produce testimonials from such prominent local gentlemen as J. Seabrook, C. Smith, E. B. Brockman, A. W. Morgan and J. M. Dempster, whom either he or the boys had presumably photographed.

Thwaites stayed on after his sons left Fremantle for Adelaide on 23 March and entered into partnership with Bernard Goode, another visiting photographer from Adelaide who rapidly returned to South Australia. Thwaites, however, remained in the West. He was working as an independent photographer at York, Northam and Toodyay in 1867 and took a series of photographs of the Aboriginal mission station at New Norcia in September-October (Archives, Benedictine Community of New Norcia). He was at Perth in February 1868, renting premises in Howick Street for ‘a short stay’. Then he too returned to South Australia. He was listed in the 1868 Adelaide Almanac as a photographic artist of Ward Street. He was at Clare in 1869-70. By 1879 he was working as a travelling photographer with the London (Australian) Photographic Company, being then at Riverton. In 1880-81 he was at Tanunda and travelling around the district; one of his subjects was Werner and Cook’s workshop near Jamestown.

Retiring from photography, Thwaites settled in Kangaroo Valley (NSW) until the late 1880s. Then he and his wife moved to Parramatta. There, on or about the night of 23 February 1888, he shot himself. He was buried on 26 February in the Church of England section of Rookwood Cemetery. His daughter-in-law testified at the inquest that he was destitute after moving to Parramatta on the promise by Sir Henry Parkes of a home for life for himself and his wife then discovering that this meant only a place in separate poor houses.’