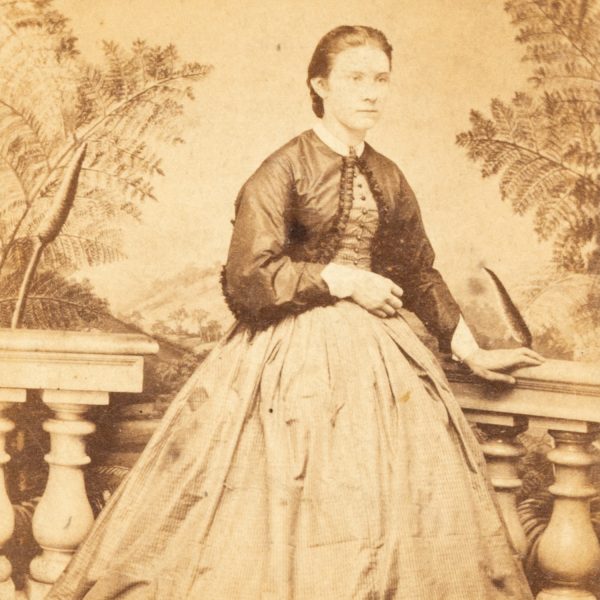 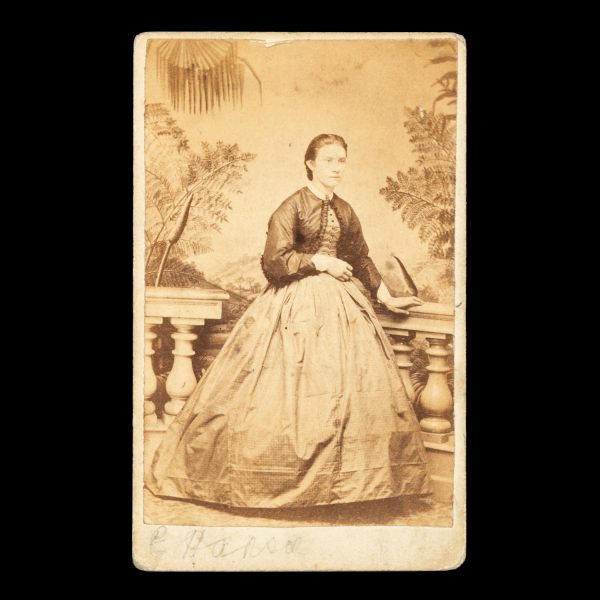 Studio portrait of a woman posed in front of a painted backdrop with a subtropical landscape. Sydney, circa 1865.

Albumen print photograph, carte de visite format, 102 x 62 mm (mount); recto with faint pencilled name in lower margin E. Hanson; verso with the imprint of ‘Sydney Portrait Rooms, 267 Pitt Street, Sydney’, surmounted by an Advance Australia coat of arms; the print has lost a tiny amount of contrast, and has a nick at top edge, but is otherwise in good condition; the mount has a few handling marks but is stable.

Robert Stewart arrived in Sydney from England in 1858. Already an accomplished amateur photographer, he worked with Charles Pickering in Sydney from 1859-61, before establishing his own business in May, 1862. The first newspaper advertisements for Robert Stewart’s Sydney Portrait Rooms, ‘opposite the Waxworks – Superior Cartes de Visite’, appeared in the Sydney Morning Herald in November, 1864. The studio operated at this address until October 1866, when it was announced that the business would relocate to 396 George Street and open its doors at the new premises from 1 November. Robert Stewart moved to Melbourne in 1870 and would found one of the most famous and successful Melbourne studios of the nineteenth century, Stewart & Co.

Examples of Robert Stewart’s cartes de visite from his early career in Sydney are decidedly rare. What makes this portrait of (Mrs) E. Hanson even more special is the spectacular painted backdrop, of which we can trace no other example