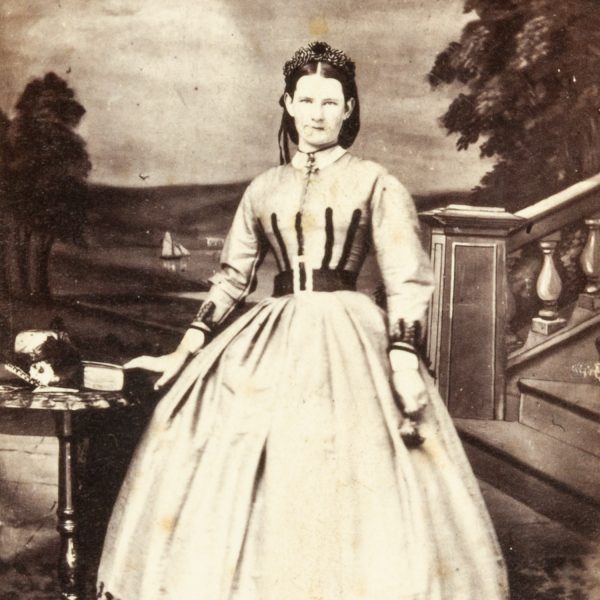 Studio portrait of a woman standing before a magnificent painted backdrop. Launceston, Tasmania, 1867-68.

This superb full-length portrait was probably taken by Peter Laurie Reid some time in 1867 or 1868, after his move from Hobart to Launceston (see below).

‘Peter Laurie Reid, … professional photographer, was apparently named after Sir Peter Laurie, lord mayor of London, by his father James Reid, a builder. Peter Laurie Reid, who was married to a daughter of H.W. and Sarah Seabrook, kept a store and post office at 172 Elizabeth Street, Hobart Town, from at least 1852 until 1862 when he sold the shop and opened a registry office at 44 Murray Street. On 18 June 1863 this was for sale. He then set up the photographic business of P.L. Reid & Co., initially in partnership with Matthew Patrick Dowling; they advertised for an apprentice for the photographic business on 29 July 1864. Later that year Reid and Dowling parted on unfriendly terms and subsequently conducted a bitter debate in the Hobart Town press. Dowling complained in the Hobart Town Advertiser of 5 September 1864 that ‘a large number of card portraits taken by him’ were still on show at Reid & Co. Reid replied to this ‘consummate impudence’ the following day, explaining that Dowling’s portraits were ‘only on show to display their inferiority to those taken by P.L. Reid & Co.’s double card process’, adding that in any case many of Dowling’s photographs had been taken by Dowling’s brother Paul when in partnership with Sharp. A lively exchange of public insults followed, with the principals adopting the sobriquets ‘Federal Dowling’ and ‘Confederate Reid’. An ‘apology’ from Reid to Dowling was published on 14 October but this did not conclude the quarrel. Reid was still writing long rejoinders in the Advertiser on 28 October.

At the end of 1864 Reid & Co. advertised portraits of Colonel and Mrs Gore Browne (the governor and his wife) and Rev. J.W. Simmons for sale. By June 1865, when advertising had everywhere become more aggressive, his firm was offering every sitter a portrait photograph at no cost. This was not, of course, quite the bargain it seemed. The first carte-de-visite was free provided that at least four were purchased; the others cost 1s 6d each. Nevertheless, the offer generated a great deal of publicity even in other colonies and presumably gained him some extra business if no long-term financial security. In September 1865 Reid changed the name of his company to the London Portrait Gallery and moved back to his former premises at 172 Elizabeth Street. In August 1866 he was promoting the sale of photographs through his ‘Great Christmas Gift Club scheme’, but by December the property was for sale. Early the following year Reid moved to Launceston, opened another photographic portrait gallery and worked as a travelling photographer. In December 1868 he had ‘four hundred views from all parts of the island’ for sale at his Launceston gallery. By 1878 he was at Latrobe, near Devonport, and his Launceston studios had been taken over by G. Padman. Surviving cartes-de-visite views of Launceston (1860s, Mitchell Library, State Library of New South Wales, Sydney) are of a high standard.’