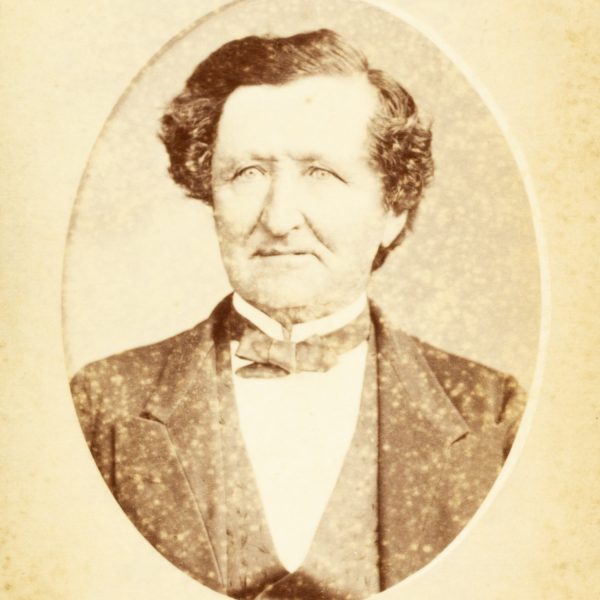 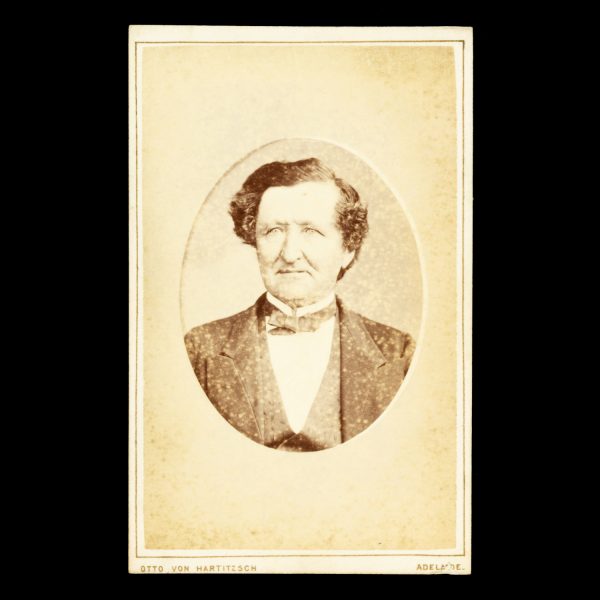 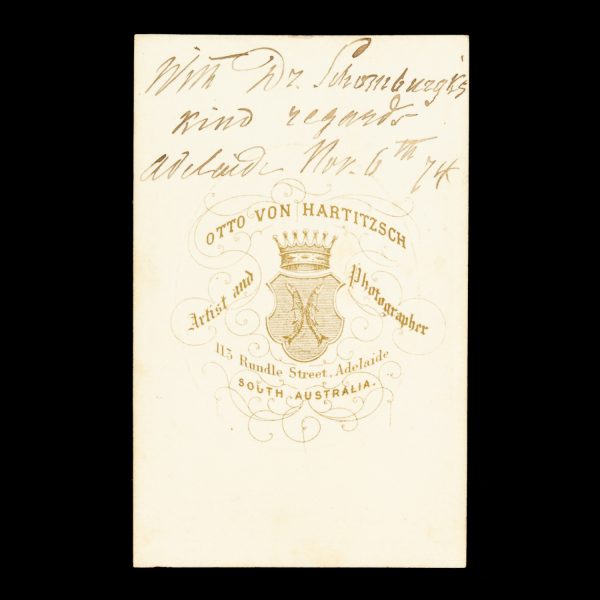 Albumen print photograph, carte de visite format, 101 x 63 mm (mount), verso with imprint of ‘Otto von Hartitzsch, Artist and Photographer, 113 Rundle Street, Adelaide, South Australia’ and a fully contemporary inscription in ink in the hand of the great botanist himself: ‘With Dr. Schomburgk’s kind regards. Adelaide, Nov. 6th 74’; some mottling in the negative of the oval-formatted image, otherwise both print and mount are in fine condition.

‘Moritz Richard Schomburgk (1811-1891), botanist, was born on 5 October 1811 at Freyburg, Saxony, son of Johann Friedrich Ludwig Schomburgk, assistant Lutheran pastor, and his wife Christiane Juliane Wilhelmine, née Krippendorf. Educated at a Freyburg primary school and by a private tutor, in 1825 he began a gardening apprenticeship at Merseburg. After his military service with the Royal Guard at Berlin in 1831-34 he worked in the garden of a Berlin shooting range and in 1835 was a gardener at Sanssouci, Frederick the Great’s palace at Potsdam. He accompanied his explorer brother Robert on an expedition in 1840-44 to British Guiana, as botanist and historian. He later published his three-volume Reisen in Britisch-Guiana in den Jahren 1840-1844 (Leipzig, 1847-48).

Unable to find suitable employment at home, Schomburgk and his brother Alfred Otto formed an emigration society and in March 1849 sailed for South Australia in the Princess Louise. On 24 June 1849 on board ship he married Pauline Kneip, daughter of a Potsdam timber merchant and carpenter. The passengers included C. W. L. Muecke, C. G. A. Linger and T. G. H. Buring. On 30 August, three weeks after his arrival, Schomburgk was naturalized and on 19 September settled at Buchfelde, four miles (6.4 km) from Gawler. While his brother started the Süd-Australische Zeitung, Schomburgk planted a vineyard. By 1862 he had about five acres (2 ha) of verdelho and mataro grapevines from which he made a small quantity of wine, and also grew table grapes. In 1860-61 he was chairman of the district of Mudla Wirra; he organized the Gawler Museum.

In September 1865 Schomburgk was appointed curator of the Adelaide Botanic Gardens and continued the job started by his predecessor, George William Francis, to transform it from ‘a sterile waste’ into one of the most beautiful spots in the colony. At his first board meeting he outlined a comprehensive programme of building and improvement and by 1868 the rosery and the experimental garden were open. He visited F. von Mueller with whom he frequently corresponded, and returned from Melbourne with a valuable collection of plants for the gardens. Within South Australia he distributed plants and trees to public bodies and exchanged specimens with private gardeners. In 1873 he sent out a total of 18,000 trees. He was responsible for the planting of Wellington Square, North Terrace, the Government House gardens and Marble Hill in Adelaide, and of the government farm at Belair. Afforestation claimed much of his attention and he spoke and wrote widely on the importance of forests for their effect on climate as well as for their economic value. In 1867 he planted in a specially built hot-house in the gardens the first and for a long time the only Victoria Regia in Australia. This giant water-lily, which he had classified, brought many visitors to the gardens while its growth was reported weekly in the press. It produced leaves over 6 ft (1.8 m) wide and flowers 13 ins (33 cm) across. He also built a palm house, a museum of wood specimens, a herbarium and a museum of economic botany.

In particular Schomburgk’s Report on the Progress and Condition of the Botanic Garden and Government Plantation of 1881 summarized his work on the introduction and acclimatization of plants and seeds of economic importance that was among his most important contributions to the colony. He corresponded with colleagues and friends, especially in California, northern Africa and Italy where the climate resembled that of South Australia, seeking seeds of grasses, fodder, cereals and other plants, with which he experimented before distributing them within the colony. He was often disheartened by a lack of response: of 100 samples sent to growers in one year he had only one reply. His efforts to encourage the planting of almond groves and flowers for perfume were unsuccessful, the farmers preferring more orthodox crops; but three of his new wheat strains became favourites in South Australia. He also introduced a phylloxera-resistant vine and some of his new grasses stood up to severe drought. He persuaded some farmers to grow wattle for tanning. He reported in 1891 that he had increased the number of known South Australian species in the Botanic Gardens from 5000 to nearly 14,000. He was frequently called upon to give evidence to select committees on subjects ranging from sanitation, education and main roads to disease in wheat, vegetable products and the alleged harmfulness of sparrows. He had been a member of the Philosophical Society of Adelaide from 1865 and read many papers to it and to other Adelaide societies. He was a member of many other learned societies in Europe, America and the Australian colonies. Honoured for his work by the kings of Prussia and Italy and by the Duke of Hesse, he was awarded an honorary D.Phil. by the Germania Academy. In 1872 he was offered, but refused, the directorship of the Melbourne Botanic Gardens.

Schomburgk died on 24 March 1891 at his house in the Adelaide Botanic Gardens and was buried in the North Road cemetery, survived by a son and four daughters. His estate was sworn for probate at £5300.’