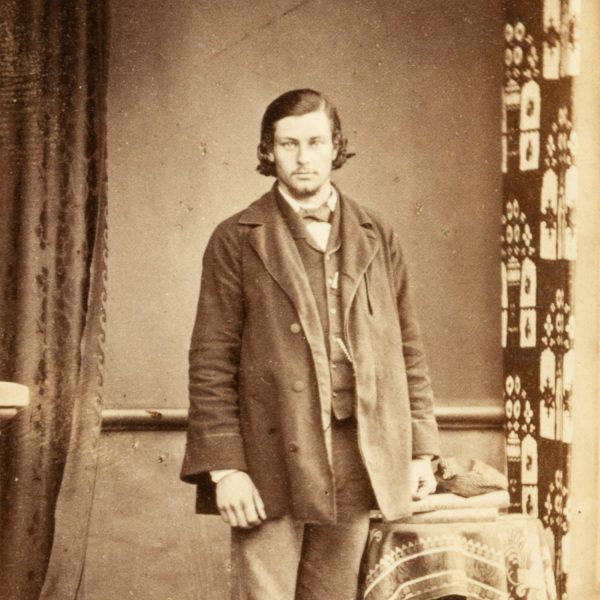 [Title from inscription verso]. Albumen print photograph, carte de visite format, 105 x 65 mm; verso with fully contemporary inscription in ink ‘Studio portrait of Charles Montague Ellis, aged 21 years 9 months. Taken at Nelson, New Zealand, August 1863’, and above it in pencil in a later hand ‘Photo by W. Davis’ (the attribution made by the previous owner on the basis of a comparison with another studio portrait from the same album, with the back mark of W. H. Davis); a strong print with excellent clarity and tonal range, in fine condition; a few spots of foxing to the mount.

A fine full-length portrait of a strikingly handsome young man in the prime of youth, taken in the Nelson studio of William Henry Davis.

Charles Montague Ellis was born in Bromley, Kent, on 31 December 1841, the son of Montague Arden Ellis and Sophia Louisa (Hill) Ellis. In 1849 he emigrated with his family (his parents and two brothers) from Hackney, London to New Zealand on the ship Pekin, which arrived at New Plymouth. The family then settled in the Nelson district, in the northwest corner of the South Island. Sophia gave birth to three daughters in Nelson, one of whom, Emma Florence died at the age of 14 in 1868.

The photographer, William Henry Davis, arrived in New Zealand from London about May 1858 at the age of around 20. He was in Wellington from May 1858 to December 1859; Sydney, December 1859 to August 1860; and Nelson, from August 1860 to December 1864. He spent 1865 in England before returning to Nelson, where he remained up until December 1873. He then worked for a year in Christchurch, before relocating to Auckland at the end of 1874. Davis committed suicide by throwing himself from the Manukau to Taranaki steamer on 30 August, 1875.