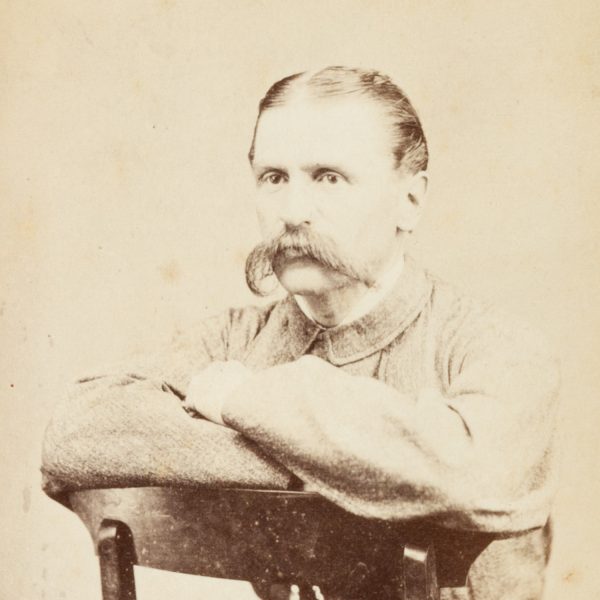 Albumen print photograph, carte de visite format, 98 x 62 mm (mount), verso with illustrated imprint of ‘Manning & Knight, Perth, West Australia’ surmounted by a kangaroo, along with the sitter’s inscription in ink ‘With best love to Fannie, Wilkie’, and the recipient’s annotations in violet ink ‘1871’ and ‘Received in London Febry. 26th 1872’; a later identifying caption in pencil ‘G. F. Wilkinson’ was added by the previous owner, based on information contained in the family album from which it was sourced; the print is in very good condition; the mount is clean, with a slight bend at the bottom edge.

The following research into the fascinating and varied career of Western Australian immigrant George Faulkner Wilkinson is by one of his descendants, Janette Faulkner Roberts, and is published online at East Perth Cemetries:

Captain Wilkinson, Mrs Wilkinson and their 2 children born in England sailed from England per Palestine arriving in Western Australia on 7 August 1868.

Arrived in Western Australia having been persuaded to buy a sheep station at Champion Bay, Geraldton 300 miles from Perth. Employed 15 Ticket of Leave men 1868-1873, including 4 men digging trenches.

Item in Geraldton Newspaper 15 December 1869. ‘it is rumoured that Mr Wilkinson will shortly leave the town. This young Gentleman has made many friends during his short stay in Geraldton and he will be greatly missed, not only by his friends, but also by the public who have so often enjoyed singing at our concerts. He has always been ready to assist. We notice that his name is included in to-night’ s lawn tennis programme, on which occasion he will probably make his last appearance previous to his departure from Geraldton’.

Was Transport Officer in the Volunteer movements and Organist at Both Anglican and Wesleyan Churches during the 1870’s.

Government Gazette – Yesterday’s Government Gazette notifies that His Excellency the Governor has been pleased to appoint Captain George Faulkner Wilkinson to be a Magistrate of this Colony. A despatch from the Secretary to the Government of India to the Colonial Secretary, Western Australia is published, setting forth that every Master of a ship landing or allowing to land in any part of British India any person of European extraction who has been convicted in any other part of Her Majesty’s dominions of felony, or of an offence which, if committed in England, would be a felony, shall, on conviction before a Magistrate, be liable, for every person so landed or allowed to land, to pay a fine not exceeding five hundred Rupees and not less than on hundred Rupees, and in default of payment, to imprisonment for any term not exceeding two months, unless the defendant shall satisfy the Magistrate by evidence (which the defendant is hereby declared competent to give), that he had made due enquiry as to the person on landing, or allowed to land, and that he had no reason to believe that such person had been convicted aforesaid.

1876 First Secretary of Weld Club, Perth (A prestigious Gentleman’s Club noted for its Heritage listed building on the corner of Barrack Street and the Esplanade. Was a great friend of Sir Frederick Weld, Governor of Western Australia after whom the Club was named.

1879 Auctioneer. Wine and Spirit Merchant in Partnership with Courthope.

April 1881. Captain Wilkinson had the honour of being the first Station Master for the tiny railway which ran between Perth and Fremantle. The first 12 miles of railway was laid in 1880.

A low Bungalow house stood for many years at the corner of Lord Street and Adelaide Terrace, Victoria Avenue did not exist the n, the residence of the Wilkinson family.

The information about being the First Station Master came from a short piece taken from a book ‘Early Days’ December 1942 written by the Royal Western Australian Historical Society in the section Memories of Adelaide Terrace. The Romantic Story of Some Famous Homes. By Mrs Jane Adam.

He had an unusual hobby, Ivory carving and turning. Some of his work was sent by W.A. Government to the Paris exhibition where he won a Bronze Medal. He was also keen on Auctioneering.

The announcement that Captain Wilkinson, who for some time had held the position of Station Master at Perth, had died suddenly early on Thursday morning, came as a shock to the community. The deceased Gentleman for years past, had suffered from an affection of the heart, which caused his friends serious anxiety, but on Wednesday evening he appeared to be in his usual state of health, and there was no warning that the end was so near’.

Captain Wilkinson, both as a private gentleman and as a Government Official, had secured very general popularity. As Station Master of Perth, he was indefatigable in attending to the comfort and convenience of the public, and never shirked duty even when, as often happened he was suffering from severe physical distress.

The Military funeral accorded to the late Captain Wilkinson as Staff Officer of Volunteers, in which the Perth, Fremantle and Guildford Rifle Corp were largely represented, took place yesterday afternoon at half past four, and was attended by numbers of personal friends and the general public.

I believe he is buried in an unmarked grave in East Perth Cemetery.‘