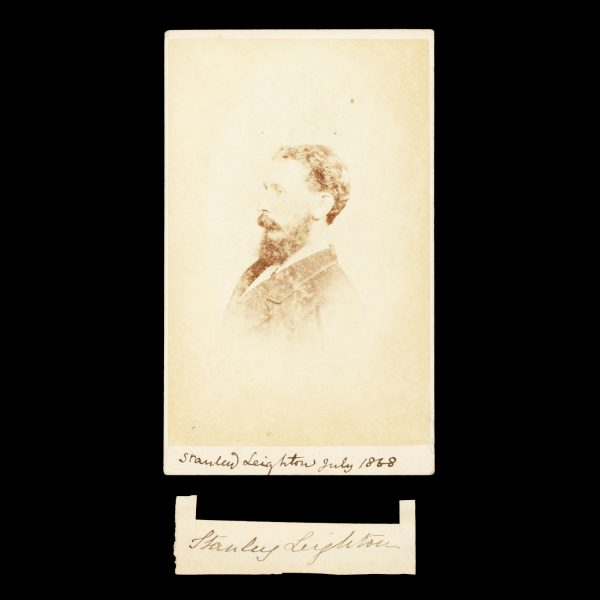 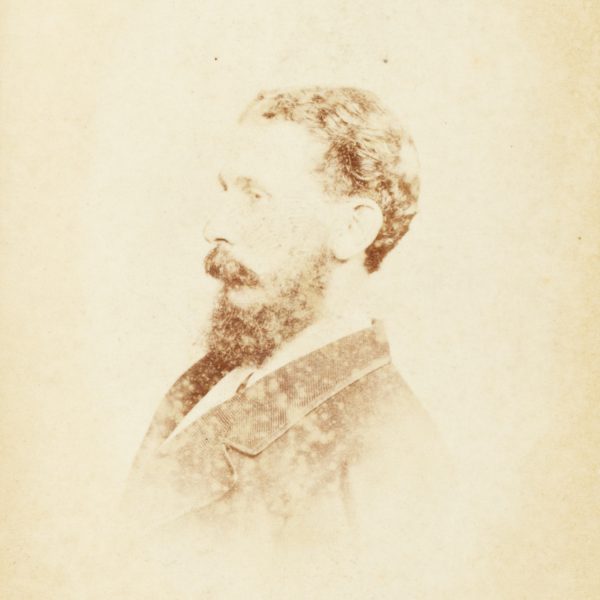 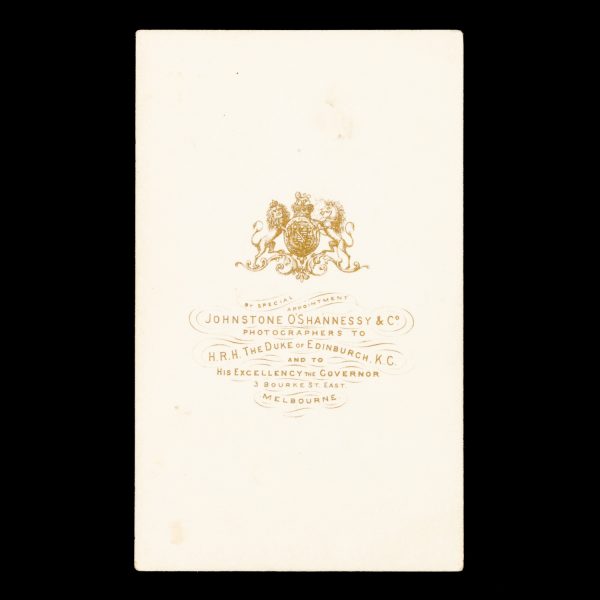 Albumen print photograph, carte de visite format, 104 x 63 mm (mount), recto with fully contemporary inscription in ink across the bottom margin ‘Stanley Leighton July 1868’; verso with the gilt imprint of ‘Johnstone, O’Shannessy & Co., Photographers to H.R.H. The Duke of Edinburgh K.G. and to His Excellency the Governor, 3 Bourke St. East, Melbourne’; the albumen print has mottling in the negative and has lost some contrast; the mount is in fine condition; accompanied by a section cut from the original album window mount, bearing a second contemporary caption, ‘Stanley Leighton’.

Barrister and accomplished amateur artist Stanley Leighton left us a significant legacy of his visit to Australia in 1868: the publication Sketches of Australia with Journal Extracts (London, 1868), as well as two large albums of watercolours and photographs documenting his Australian travels, now in the National Library of Australia.

There appear to be no photographs of Leighton in Australian public collections. This carte de visite was sourced from an album belonging to the Lempriere family, and was probably originally acquired directly from Leighton by Melbourne merchant and commission agent William George Lempriere (1826-1887).

‘Stanley Leighton … sketcher, barrister and politician, was born on 13 October 1837, second son of Sir Baldwin Leighton, 7th Baronet of Loton Park, Shropshire. Educated at Harrow and at Balliol College, Oxford, he was called to the Bar at the Inner Temple in 1861 but retired from practice in order to make a tour of the Empire from December 1867 to 1869. He visited India with a friend Louis Buxton; 54 Indian drawings and his Indian journals are in the India Office Library, presented by his daughter Rachel and Mrs Parker Leighton in 1953.

The book of his extensive travels within Australia, Sketches of Australia with Journal Extracts (London 1868), includes a print after his watercolour of Albany – the sole Western Australia view – drawn on 19 September 1868 on his way home. The original is in one of his two large ‘Australia’ albums (National Library of Australia), which include photographs as well as watercolours, all unsigned. There is no evidence that any of the photographs were taken by Leighton (many are souvenir cartes-de-visite of his hosts), but the fifty-five sketches are certainly his work and justify The Dictionary of National Biography ‘s description, ‘an accomplished amateur artist’.

Leighton arranged his sketches thematically rather than chronologically and accompanied them with lengthy texts that formed the basis of his book. His subject divisions were:

The capitals of the different colonies and their neighbourhoods…[and] The houses of the landowners, or those who live in places belonging to themselves and not held under lease from the Government. These are the men who form the highest and wealthiest class in Australia [vol. 1]…The Squattages…An Australian coach and a little account of Australian coaching… A Queensland sugar plantation… A number of sketches of Australian scenery [vol. 2].

The lively, opinionated and extremely class-conscious narrative describes the politicians and squatters he met, their families, social origins and properties in Victoria, New South Wales, South Australia and Tasmania.

Of particular interest are the rural tours. After spending a week at Mount Gambier (SA), Leighton and his companion, Rees-Davies, “prepared to start across country to Melbourne intending to stop on our way as often as we could at the houses of squatters”. From Melbourne they made a three-week tour to the Riverina, via Echuca and Deniliquin, visiting his friends the Severnes who had been in Australia since 1864 and had taken up sheep farming. He drew all the properties, usually including a view of the homestead such as Echuca on the Murray and Andrew Learmonth ‘s ‘Groongal’ (both watercolour). Together his drawings and notes provide, as Burmester notes, “a very full still-life of Australia in 1868 – at least, from a conservative point of view”. His albums were presented to the National Library in 1954 by his daughter, Rachel Leighton.

In 1873 Leighton married Jessie Marie Wynn. He was Conservative MP for North Shropshire in 1876-85 and for West Shropshire from 1885 until his death on 4 May 1901. He remained interested in colonial matters and was honorary commissioner for South Australia at the 1878 Paris Universal Exhibition. He also published several books on the history and archaeology of his native Shropshire, illustrated after his own drawings.’