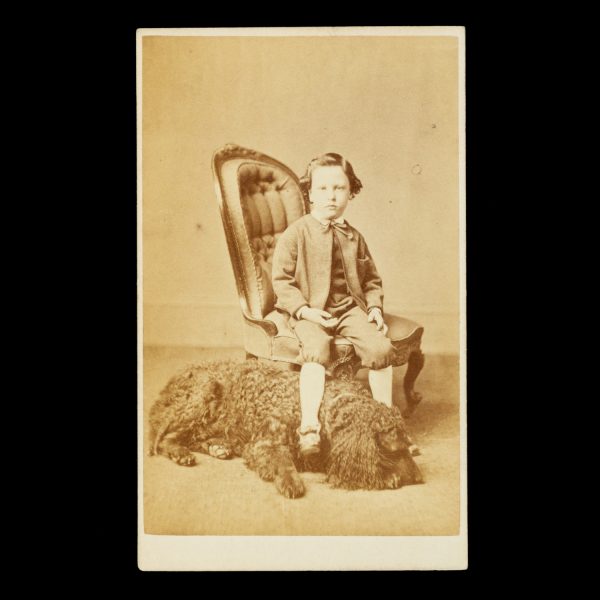 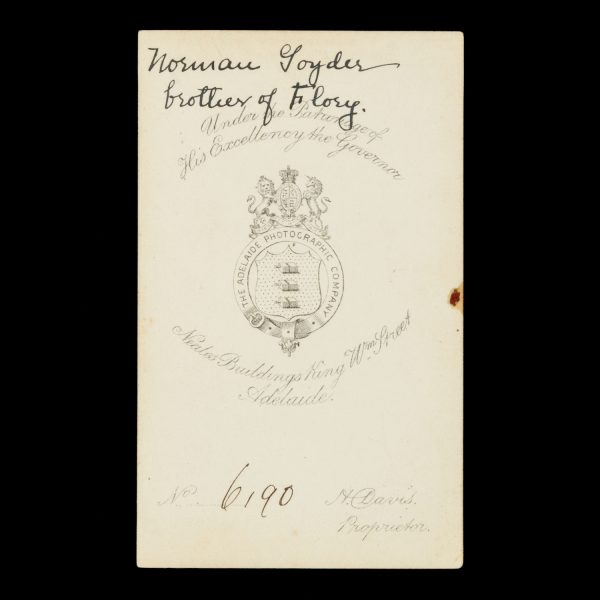 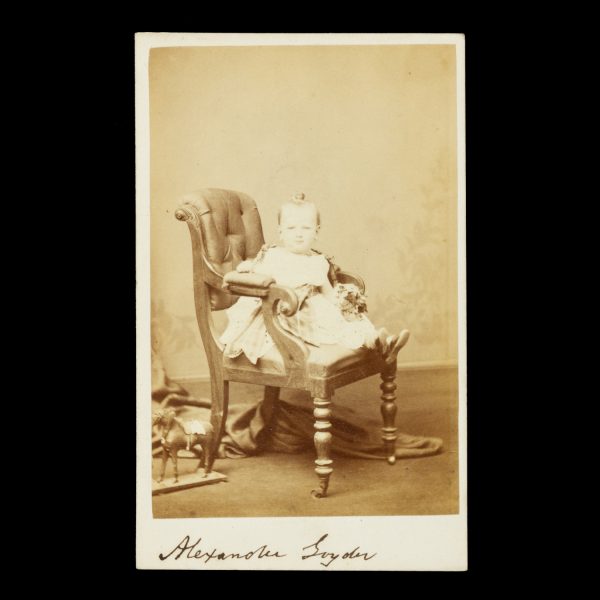 I. Albumen print photograph, carte de visite format, 102 x 63 mm (mount); recto with contemporary inscription in ink at lower margin ‘Alexander Goyder’; verso imprinted ‘The Adelaide Photographic Company. F. S. Crawford, Manager’ and with slightly later inscription in ink ‘Alec Goyder, brother of Floey’; print and mount are in very good condition. (Note: Crawford was Manager of this studio up until 1867. This portrait was most likely taken in the first half of 1866, based on the assumption that Alexander was around 2 years old at the time).

II. Albumen print photograph, carte de visite format, 104 x 63 mm (mount); verso imprinted ‘The Adelaide Photographic Company. Neales Buildings King Wm. Street, Adelaide. Under the Patronage of His Excellency the Governor. H. Davis, Proprietor’, and slightly later inscription in ink ‘Norman Goyder, brother of Floey’; print and mount are in very good condition. (Note: Davis, the successor to Crawford, was Manager of this studio from 1868. This portrait was most likely taken in late 1870 or early 1871, based on the assumption that Norman was around 4 years old at the time. This would have been only a few months after his mother’s suicide in April 1870).

Alexander Woodroffe Goyder (1864-1943) was born on 29 January 1864 in Walkerville, Adelaide, the ninth child of George Woodroffe Goyder (Surveyor-General of South Australia) and Frances Mary Smith. He would follow in his father’s footsteps, becoming a surveyor for the Western Australian government in later life. Alexander (or Alec) married Helena Maria Campbell Davies (1869-1958), and the couple had four children.

Norman Underwood Goyder (1866-1941), pictured in this studio portrait with the family’s giant poodle lying placidly at his feet, was George and Frances’ youngest child, born on 8 November 1866 in Medindie, Adelaide. Norman married Susan Isabella Wiedemann, and the couple had six children. Norman followed a career as a public servant, and spent his entire life in Adelaide.

George Woodroffe Goyder (1826-1889) was born in Liverpool, and later moved to Glasgow where he was articled to a railway engineer and studied surveying. He migrated to Sydney in 1848, and after spending three years there he visited Melbourne, then went on to Adelaide to settle. In the June of 1851 he became a civil service draftsman, and on the 10 December he married Frances Mary Smith in Adelaide.

Goyder quickly gained a reputation for being the ablest administrator and most efficient public servant within the civil service. He was appointed Assistant Surveyor-General in 1856, then Surveyor General in 1861. For his dynamism he earned the nickname ‘Little Energy’. His most notable contribution to surveying is Goyder’s Line of rainfall, used in South Australia as ‘the line of demarcation between that portion of the country where the rainfall has extended, and that where the drought prevails’. A map published in 1866 showed the line sweeping east from the Murray to the Victorian border, and another from Spencer Gulf far to the west. Its separation of the lands suitable for agriculture and those fit for grazing served to aid in the reassessment of leases, as well relieving stricken pastoralists.

Goyder is otherwise remembered as the ‘Father of Darwin’, for his siting, planning, and initial development of Darwin (originally called Palmerston), in 1869-70. He led a team of 128 men to assist in the surveying of the region. In fieldwork, Goyder’s skills were unrivalled, and over 18 months, his team founded four townships. Goyder himself returned to Adelaide in November 1869. One of the men assisting the expedition was Goyder’s brother-in-law, Edwin Smith.

Goyder was an avid researcher into the lands of South Australia – including today’s Northern Territory – and made recommendations to many settlers in the newly developing colony. Though he was admired as the ‘king of the lands department’, he attempted to tender his resignation three times – in 1862, 1873, and 1878 – but each time he was convinced to remain with a raise of salary. Due to constant overwork his health steadily declined, resulting in him long suffering from scurvy, and contracting a ‘nervous and muscular debility’ in 1869 which took several years to recover from. He finally retired in 1884 without a pension, but was given a purse of thousands of sovereigns by leading citizens. He was appointed C.M.G. in 1889.

In April 1870, while on a visit to England, Goyder’s wife Frances had committed suicide from an overdose of sleeping pills. The following year, Goyder took nine months leave and visited Britain and America, leaving his nine children in Adelaide in the care of Ellen Priscilla Smith, his late wife’s sister. In 1871 he married her, and the couple had one son and twin daughters.