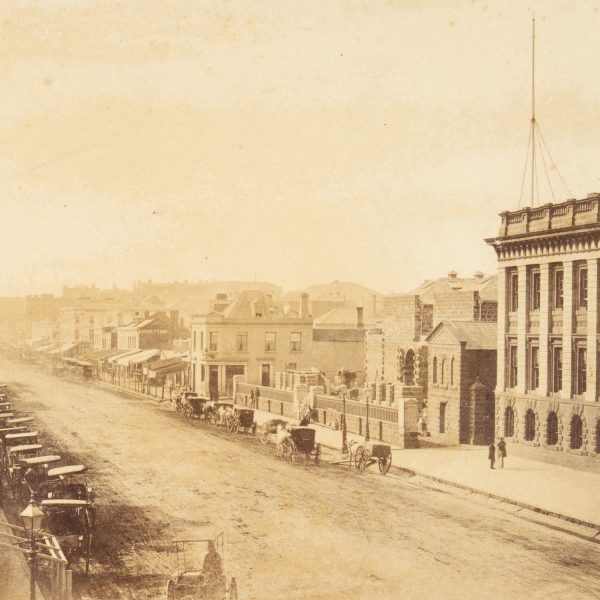 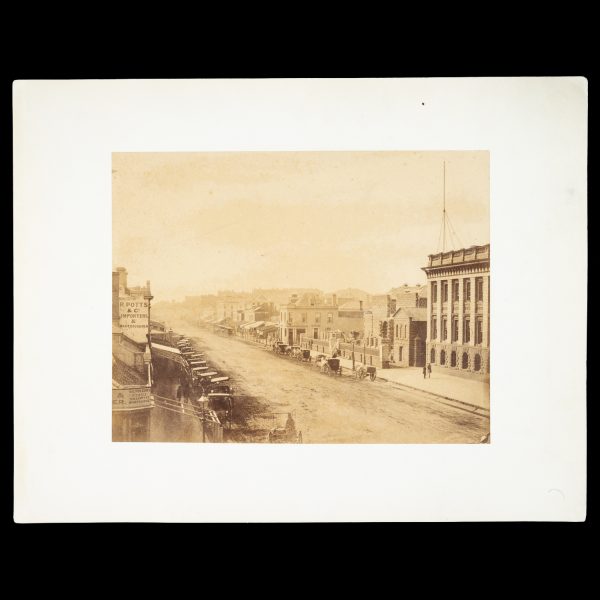 Albumen print from collodion wet-plate negative, 239 x 193 mm, laid down on its original board mount as issued, 372 x 287 mm; a strong print with good tonal range and great clarity; the mount is clean and unfoxed.

One of the earliest paper-print photographic views of Melbourne, from the series Sun Pictures of Victoria, produced in 1858 by Antoine Fauchery and Richard Daintree. The view looks north along Swanston Street from the southwest corner of the intersection with Collins Street. In the right foreground is part of the stone edifice of the Old Town Hall (built 1850-53, demolished in the mid 1860s), outside which we can see two gentlemen standing in what must have been animated conversation, as both figures are slightly blurred. On either side of the unmade dirt thoroughfare at least twenty hansom cabs wait patiently for a fare; we can see how the white horses on the right moved their heads while the picture was taken. In the centre foreground another hansom cab travels slowly in the direction of the camera, about to turn right into Collins Street.

It was at this point that Daintree met Antoine Fauchery. The two shared similar interests and both were proficient in the new field of photography. They went into business together to publish a series of their own photographs of the colony of Victoria. This series of fifty large format photographs, created using the new collodion wet-plate process, was titled Sun Pictures of Victoria, and was released in ten monthly installments from mid-1858. Surviving individual examples of any of the photographs from Sun Pictures are rare indeed. The State Library of Victoria and the State Library of Queensland hold the only recorded complete sets. Sun Pictures unquestionably constitutes the most important photographic record of the colony prior to 1860, in terms of the quality of the prints and the range of subject matter. It contains scenes of life on the goldfields, views of the booming city of Melbourne, highly significant portraits of Aborigines and of prominent colonizers such as Sir Henry Barkly, Bishop Perry, Edouard Adet and Sir John O’Shanassy.

In a review of the first installment of five photographs in Sun Pictures, published in the Melbourne newspaper The Argus on 13 August 1858, the journalist was glowing in his praise:

‘Sun Pictures of Victoria: Under this title Messrs. A. Fauchery and R. Daintree have just published the first monthly part of a work which it is proposed to extend to ten numbers, and which is to comprise 50 large photographs, in illustration of our colonial celebrities, our landscape and marine scenery, and our private and public architecture. The invention of the stereomonoscope, by means of which the objects exhibited in a sun picture, of any size, assume solidity and relief to the eye of the spectator, gives an additional value to photographic transcripts of nature. The collection undernotice are admirable specimens of this branch of art, for art it is; as, irrespective of the skill requisite to manipulate successfully, the manipulators must also possess the artistic faculty in the choice of subjects, in the selection of the most picturesque point of view, and in discerning the most favorable aspects or accidental dispositions of light and shade. With this faculty Messrs. Fauchery and Daintree appear to be endowed, and it appears to advantage in more than one of the pictures now before us. These are five in number, and merit separate notice. No. 1. The portrait of His Excellency the Governor has much of the effect of a sepia drawing, but with a softness and delicacy of finish such as a sepia drawing rarely exhibits. It Is especially rich in tone, and strikingly like the original, which (paradoxical as the assertion may appear) a great many photographic portraits are not… We may add that the pictures are mounted on cardboard, and will constitute, when the full number has been issued, a work of particular value and interest’.