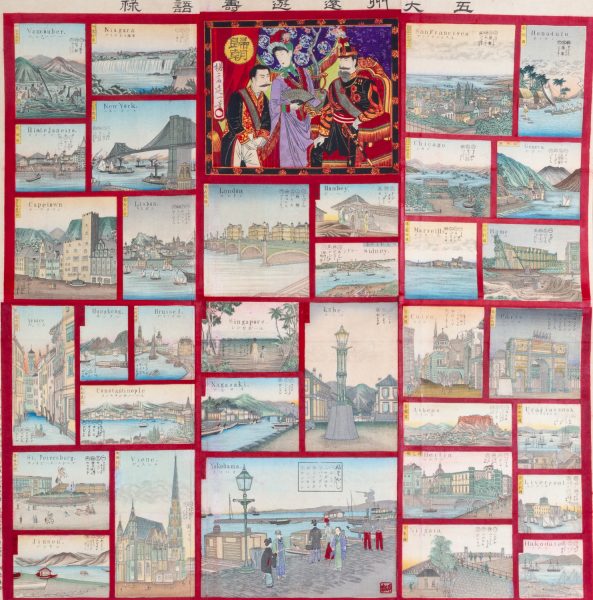 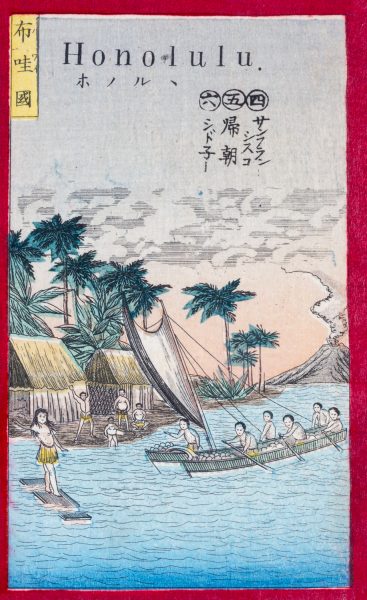 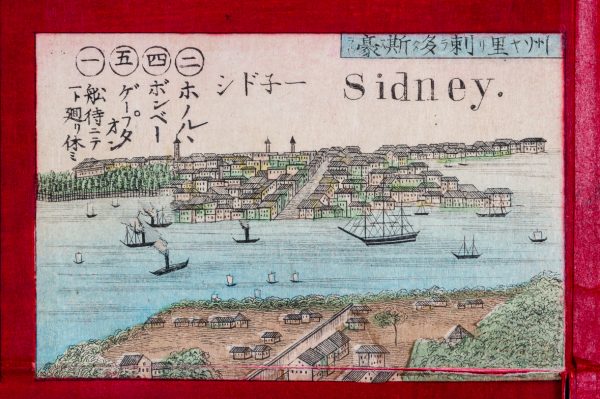 A board game of a voyage around the world, starting in Yokohama and with illustrated vignette scenes of the destinations visited, including Vanvouver, San Francisco, Niagara Falls, New York, Singapore, Sydney (with a view of Sydney Harbour), Paris, Berlin, St Petersburg, Chicago, Cairo, Honolulu, London, Hong Kong etc.

Yosai Nobukazu was a Ukiyoe painter in the, Meiji Era, and disciple of the famous Ukiyo-e artist Yoshu Chikanobu (1838-1912).

There are two varieties of sugoroku, one similar to backgammon and another similar to Snakes and Ladders. The present example is of the latter type, also called e-sugoroku (picture sugoroku). Countless variations of playing boards were made, with many different themes. This sugoroku board depicts different places around the world. Interestingly, each locality – including Sydney – is labeled in English, with Japanese script above providing the pronunciation for Japanese people.

This game was produced only 36 years after the opening of Japan, so extremely few Japanese of the time would have actually visited the places depicted. Certainly there was knowledge of the outside world pouring into Japan at a greater rate than ever before – a rate increased by the Japanese government’s quest for western knowledge. Indeed, the ending square with the military officials may allude to the diplomatic missions that the Meiji government sent around the world to gather information and negotiate diplomatic ties. In that light, this playing board could be seen as representing the journeys of these missions, which had a significant impact on the modernization of Japan. From 1879 to 1896, the Melbourne and Yokohama-based merchant Alexander Marks was honorary consul for Japan for the Australian colonies.