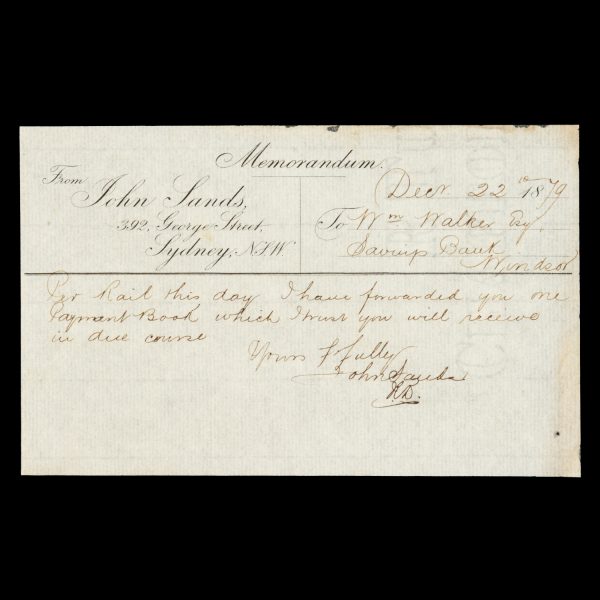 [SYDNEY] Memorandum from the firm of John Sands, printer, stationer and bookseller, to William Walker of Windsor. Dated 22 December 1879.

Memorandum. From John Sands, 392, George Street, Sydney, N.S.W. Laid paper with watermark, 127 x 203 mm, lithograph printing with manuscript entries; dated 22 December 1879 and addressed to Wm Walker Esq., Savings Bank, Windsor, the memo. is written and initialed by an employee and reads: ‘Per Rail this day I have forwarded you one Payment Book which I trust you will receive in due course. Yours f.fully, John Sands / R. D.’; fine condition.

Early Sydney printer, stationer and bookseller John Sands (1818-1873) established his business in Mary Reiby’s old house in George Street in 1848, and the firm continued to operate from these premises right up until 1970. At the time this memorandum was sent to William Walker, the business was run by his son, Robert.

‘Sands formed several partnerships in Sydney and Melbourne. The first, in April 1851, was with his brother-in-law Thomas Kenny; in 1852 Sands and Kenny took over James Williams’s printery in Queen Street, Melbourne, moving next year to Collins Street. In 1860 Dugald McDougall (1834-1885) joined them as Melbourne manager and the firm there became Sands, Kenny & Co. Kenny retired from both partnerships in December 1861 and the firm became Sands and McDougall. By 1870 as stationers, booksellers, printers and account book manufacturers the firm was one of the largest of its kind in Australia and in that year won prizes for printing and book production at the Intercolonial Exhibition in Sydney. Sands printed and published a wide variety of publications, but especially notable were his directories, almanacs, gazetteers and prints by F. C. Terry and S. T. Gill depicting colonial life. In 1881 the Sydney firm, known as John Sands Ltd, offered one of the first groups of Christmas and New Year cards in Australia: the first card, at a price of 1s. 3d., was listed as ‘Little girl offering a Christmas pudding to Swagsman’.