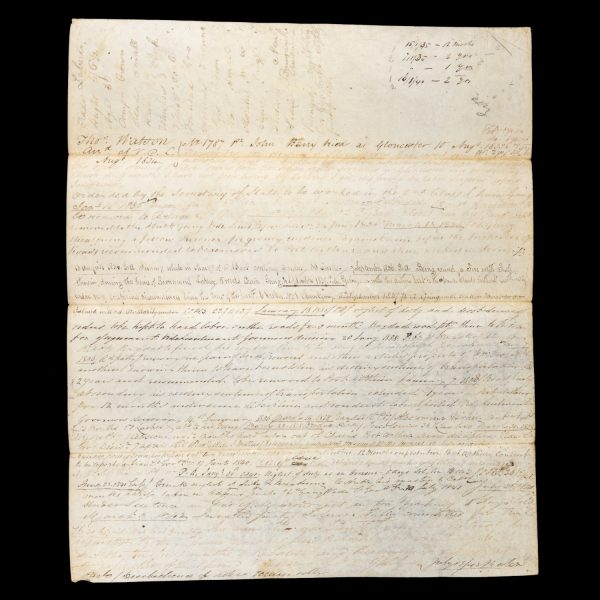 [TASMANIA] Convict record of Thomas Watson, sentenced at the Gloucester Assizes in August 1833 to 7 years transportation to Van Diemen’s Land; arrived on the John Barry, August 1834; remained in penal servitude until July 1845.

Single parchment sheet, 300 x 250 mm; manuscript in ink, densely written across 1 1/2 pages, the entries covering the period August 1834 to July 1845, written in many different hands and in different locations in Van Diemen’s Land; the prisoner’s physical description and background are entered in the upper margin recto, and beside it a clerk’s annotations record the total of 6 years added to Watson’s sentence resulting from punishments for four major transgressions committed while serving his term; rubbed and faded in sections, but for the most part legible; three original horizontal folds, the outer side annotated with the file name 1787 Thomas Watson, and in pencil ‘Not at Ross’ (possibly a reference to his absconding from there in 1844).

The official convict record of Thomas Watson is a document that exemplifies the chilling brutality of the Van Diemen’s Land penal system. Watson, a hard-bitten recidivist who clearly despised his captors and had scant regard for authority of any kind, had his original 7-year sentence extended on no fewer than four separate occasions, meaning that he ultimately spent 12 years in servitude. For much of this time he was either performing hard labour in irons on road gangs, or else was incarcerated in the Port Arthur Penitentiary, often in solitary confinement.

Watson hailed from St. John, New Brunswick. He was aged 30 at the time of his transportation to VDL. Although his trade is described as “labourer” he had apparently worked at sea for a number of years. He was convicted at the Gloucester Assizes in August 1833 of stealing five silver spoons and sentenced to 7 years transportation. He arrived in VDL per transport John Barry, in August 1834.

The following incidents are extracted from his convict record:

January 1835. Absconded: sentence extended 12 months; attached to Bridge party. For threatening another prisoner for giving evidence against him: sent to Port Arthur, hard labour in irons.

August 1836. Fishing while in charge of a boat, contrary to orders: 36 lashes.

September 1836. “Being round a fire with fish therein, during the hours of Government Labour”: 6 weeks on a chain gang.

September 1837. Port Arthur. “Going over with the return boat to the small island without waiting, under very suspicious circumstances, being the Crew of the boat: 6 weeks on No. 1 chain gang.

January 1838. Neglect of duty and disobedience of orders: to be kept in hard labour on the roads four months, Bagdad work party; then to Paston for assignment.

March 31 1838. Absconded from Bridge party: given 12 months hard labour out of chains at Port Arthur with “severe discipline”.

April 1840. Absented himself from a work gang without authority: 3 days solitary confinement and then hard labour.

January 1841. Neglect of duty as an overseer: 5 days solitary confinement.

June 1841. Neglect of duty and threatening to strike his master (Geiss): sentenced to 6 months hard labour, taken away in chains.

July 1841. Under sentence in gaol for “trafficking”: 8 days solitary confinement

November 1843. Misconduct in suffering to make a false charge against the Baker, and insulting the Superintendent in the presence of the Magistrate: 4 months hard labour in chains.