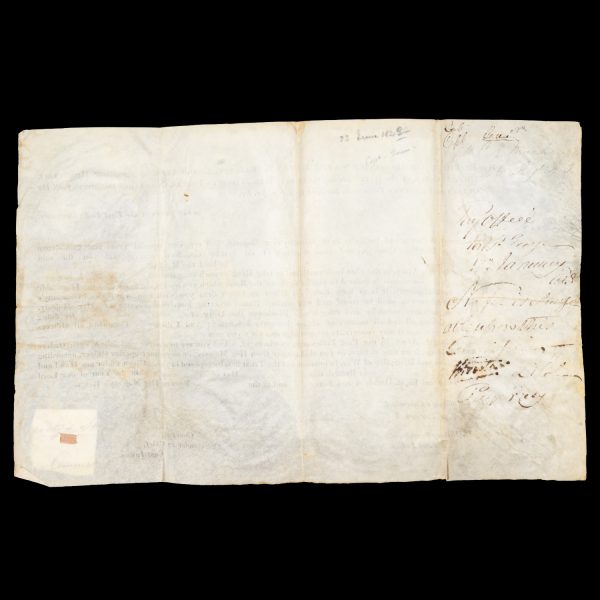 An interesting piece of ephemera which relates to the small wave of arrivals of so-called Anglo-Indians in Tasmania in the 1850s.

The historical connection between India and Van Diemen’s Land – which was known on the sub-continent as an ideal place for the recovery of one’s health as well as for its many investment opportunities – had begun in the Macquarie era. In 1824 there had even been a short-lived scheme, the Indiana Institution, intended to encourage Englishmen with Indian wives to settle in Tasmania.

Charles Ross Mackenzie (1810-1857) served in the Honorable East India Company during the 1840s and early 1850s. After retiring from the Company with the rank of Major, he settled in Tasmania, like many other British soldiers who had seen service in India. In 1854 he selected crown land under the pre-emptive right scheme at Table Cape, Wynyard on Tasmania’s far north-west coast, and settled there with his wife and four children. His oldest son, Charles J. Mackenzie (1837-1921), who was born in India, was a Member of the House of Assembly from 1886-1909.

A story about the Mackenzies of Woody Hill, near Wynyard, was published in the Burnie Advocate, on 29 December 1954. It begins: ‘WOODY HILL FIRST SETTLED 100 YEARS AGO. One of the oldest settled properties in the Wynyard district is that of the Mackenzie family at Woody Hill, near Doctor’s Rocks, which was first settled by Major Charles Ross Mackenzie just 100 years ago. In 1854 Major Mackenzie took up 1500 acres of Crown land at Woody Hill in three 500-acre sections. Although much of the land has since changed hands, three of the major’s great – grandsons, Messrs. Colin, John and Robert Mackenzie, still farm portions of the original 1500 acres….‘