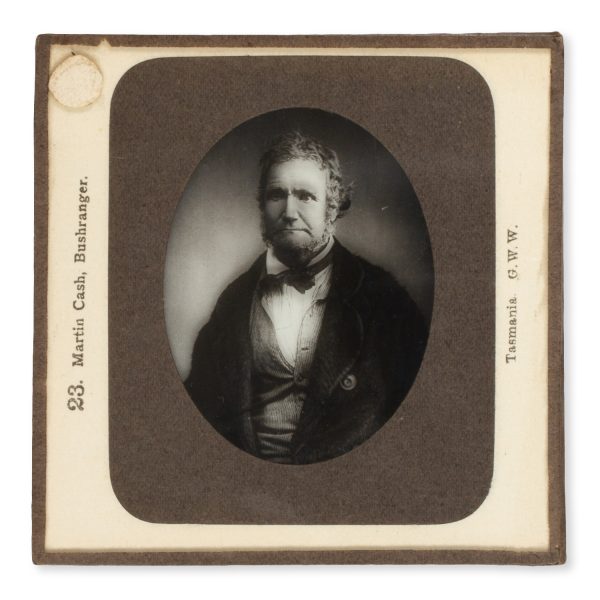 The most well-known of very few surviving photographic portraits of Martin Cash (1808-1877), the Van Diemen’s Land bushranger who twice escaped from the notorious Port Arthur penal settlement, and was ultimately granted a ticket of leave after been sentenced to life imprisonment on Norfolk Island, was taken around 1870 by an unknown photographer. In the 1890s J.W. Beattie published albumen prints and glass slides of this image, probably made from the original glass plate negative he had acquired (from Charles Woolley?). The lantern slide we offer here was produced by the Scottish firm of George Washington Wilson around 1900; the image formed part of Wilson’s Tasmania series which appears to have been published by arrangement with J.W. Beattie.

Cash was an Irish convict – literate and from a wealthy family – who had been transported to New South Wales for 7 years in 1828 for shooting at a man in a fit of jealous rage, after he had made advances towards Cash’s sweetheart. From the ADB:

‘Cash was “assigned” to Mr G. Bowman of Richmond, who leased other farms on the Hunter River, where Martin was transferred, and where he became a stockrider for nine years.

John Boodle, who had a station on Liverpool Plains, asked Cash to assist him and his brother to brand some cattle which, unknown to Cash, had been stolen. While the branding was in progress two strangers came along, remained a few minutes, and departed. Upon Boodle informing him that the strangers knew the cattle were stolen, and that transportation to Norfolk Island was the penalty for this crime, Cash decided to leave for Van Diemen’s Land. He sailed in the barque Francis Freeling for Hobart Town, and arrived on 10 February 1837.

In Van Diemen’s Land, Cash eventually came before John Price, a magistrate at Hobart Town, who sentenced him to two years in addition to his original seven years’ sentence, and to four years’ imprisonment with hard labour at Port Arthur. He briefly escaped and 18 months was added to his time. Again he escaped, and almost made it across the Bass Strait with his partner Bessie, but was caught and faced ten years at Port Arthur,[1] the so-called escape proof colony. His first attempt at escape from Port Arthur failed. However, he managed to swim across the purportedly shark-infested Eaglehawk Neck, the first person to do so. This experience would later prove useful as it earned him much respect from other prisoners.

On Boxing Day 1842 Cash, George Jones and Lawrence Kavenagh absconded from a work party. Hiding in dense scrub land and with little food they made their way 15 kilometres (9.3 mi) to the neck. Swimming with their clothes tied in bundles above their heads, they made the other side, all three of them having lost their bundles. Now naked the trio robbed a road gang’s hut for clothing, and began a twenty-month spree of bushranging, robbing mail coaches, homesteads and inns.

The three became known as Cash and Co and their reputation grew, however in August 1843 Cash discovered his partner Bessie was with another man in Hobart. Enraged, Cash swore to kill them both and he made his way to Hobart. On 29 August 1843 he was quickly spotted in Brisbane Street, Hobart, near the old Commodore Inn and a gunfight ensued. Constable Peter Winstanley was shot by Cash and died two days later. Cash was trialled for murder in September 1843. Cash was found guilty and sentenced to death by hanging, but a last minute reprieve saw him sentenced to transportation for life at Norfolk Island.

There he eventually became a trustee, and later a constable. He married in 1854, and was granted his ticket of leave later that year. Between 1854 and 1856, he was an overseer in the Royal Hobart Botanical Gardens. They had one child, a son, Martin born in 1855. Subsequently, he travelled to Christchurch, New Zealand, where he kept several brothels, in 1860 and became a free man in 1863.

Cash died in his bed in Glenorchy in 1877. He is one of the few bushrangers to die of old age. During the late 1860s he had dictated his autobiography to an amanuensis, James Lester Burke. This account, although often embellished, provides an insight into convict life. Buck and Joan Emberg later transcribed this account from the original manuscript and released it as The Uncensored Story of Martin Cash.’