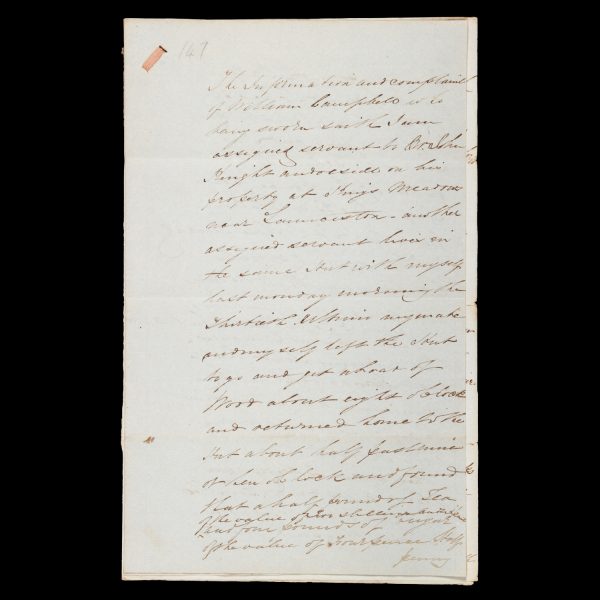 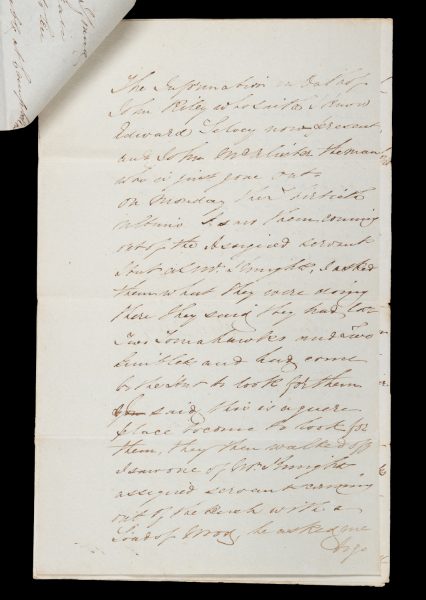 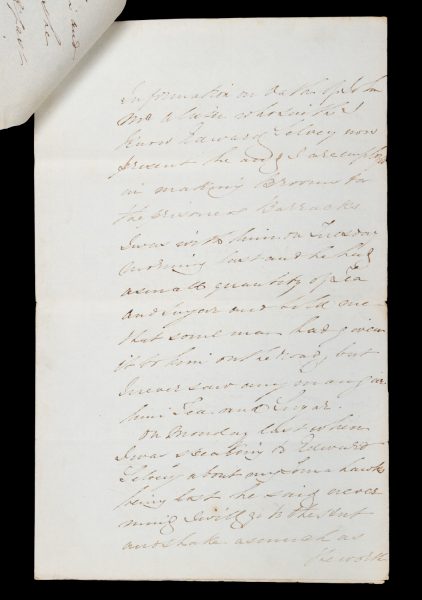 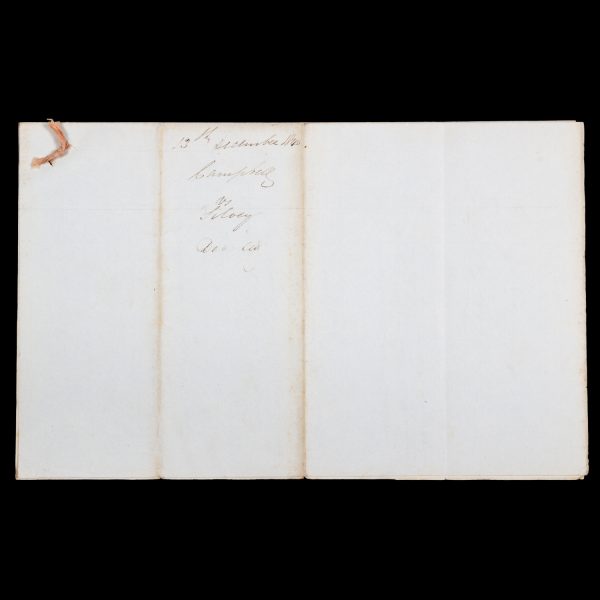 [TASMANIA; POLICE; CONVICTS] Information and Complaint of William Campbell and John Riley, assigned servants to John Knight of King’s Meadows, and of fellow convict John McAlister, testifying against the convict Edward Silvey for the theft food, clothing and tools from Knight. Launceston, December 1840.

Foolscap folio, 320 x 200 mm, manuscript in ink on laid paper watermarked ‘Newton 1838’, 8 pages, original ribbon tie; the sworn testimonies of William Campbell and John Riley, assigned servants of John Knight, and of the convict John McAlister, in the case against fellow convict Edward Silvey (aka Selvey), a prisoner who stands accused of stealing rations, tools and articles of clothing, being the property of John Knight of King’s Meadows, heard on 5 December 1840 before magistrate D’Arcy Wentworth (brother of William Charles Wentworth); Campbell and McAlister sign their depositions with their ‘mark’, while Riley is able to write his own name, which he signs in a shaky hand; the full signature of Mr. D’Arcy Wentworth, as magistrate, appears at the foot of each of the three sworn testimonies; the verso of the final blank is annotated ’13th December 1840. Campbell vs. Silvey. Decided’ (presumably not in favour of Silvey, as the three convicts’ testimonies against him are damning!); in fine condition.

William Campbell and John Riley were servants assigned to John Knight, and shared a hut on his property, King’s Meadows, near Launceston. On 13 November 1840 they discovered that various items had been stolen from their hut, including half a pound of tea, four pounds of sugar, a quarter pound of tobacco, and two loaves of bread, which had been given to them as rations by their master. Subsequently, some work tools, a pair of boots and a shirt were also found to be missing. Campbell states that he knows Silvey well from a convict work party at Campbell Town, and that he is ‘a notorious thief’.

McAlister states under oath that he and Silvey are both employed in making brooms for the prisoners’ barracks. His evidence corroborates that of Campbell and Riley: he claims to have caught Silvey red-handed with tea and other items which he claimed had been given to him by ‘some man’ on the road. He further states that Silvey often disappears for hours in the bush, ostensibly ‘to cut wood for broom handles’, which would afford him plenty of opportunity to commit theft.

Edward Silvey was convicted at the Stafford Assizes in 1837, and sentenced to transportation for life. He arrived in Van Diemen’s Land on the convict transport Neptune in January 1838.

‘D’Arcy Wentworth, born Dorset Crowley Wentworth (1793-1861), was a New South Wales politician. He was born Dorset Crowley on Norfolk Island to D’Arcy Wentworth and Catherine Crowley. The family sailed for Sydney on board HMS Reliance in February 1796. After his mother’s death in January 1800, his father changed the then six-year-old’s Dorset’s name to D’Arcy Wentworth, and his younger brother Matthew’s name to John Wentworth (1795-1820). He and his brothers William Charles Wentworth and John were sent to England for schooling in 1802, which began in October 1803. He enlisted in the army in England in 1811, as an ensign in the 63rd Regiment, his regiment was sent to Ceylon in 1814. He returned to New South Wales, rising to the rank of captain in 1825. On 27 April 1826, he married Scottish born Elizabeth Macpherson, third daughter of Major Charles Macpherson (1751-1820) of Gordonhall in Badenoch, barrack-master general of Scotland and Margaret MacPherson of Inverhall near Killiehuntly, at St Cuthbert’s Church in Edinburgh; they had no children.

Wentworth was sworn in as a Justice of the Peace for Van Diemen’s Land on 9 September 1830 and on 4 October 1830 led detachments of troops from Bothwell and Hamilton towards the Great Lake and the banks of the Ouse, Shannon and Clyde rivers as part of an operation to “…capture those hostile Tribes of Natives which are daily committing renewed atrocities upon the Settlers…” This occurred as part of what has become known as the Black War in Tasmania.

While in Van Diemen’s Land, Wentworth served as police magistrate in Bothwell, where he built a significant Georgian sandstone house, started in 1830, which was originally called Inverhall but is now known as Wentworth House.[8] He sold the house in 1833 to Charles Schaw, assistant police magistrate for Bothwell.

From 1843 to 1845 he was a member of the New South Wales Legislative Council for the Northumberland boroughs, comprising East and West Maitland and Newcastle.

He died at Launceston on 21 July 1861 and was buried with his parents at St John’s Cemetery, Parramatta, on 6 August 1861. His funeral was attended by some of the colony’s most celebrated and distinguished citizens.’ (Wikipedia)

In 1981 Robert Muir issued two catalogues (69 and 74) that featured 950 lots comprising the cream of Dodds’ private collection, including much Australian colonial material (books, maps, engravings and ephemera) of major significance. In his introduction to the first of these catalogues Muir wrote: ‘The Dodds Collection was certainly one of the most important, extensive and erudite ever to be assembled and shown in Western Australia. It was catholic in taste and direction, though Peter himself had a great knowledge of, and appreciation for, such areas as maritime and land history and exploration (with a bias to Bligh’s Bounty); the convict era; limited editions; early domestic furniture and appliances; and by no means least, West Australiana … This is the first truly substantial and West Australian based Library ever to be assembled then later catalogued for sale in this state.’