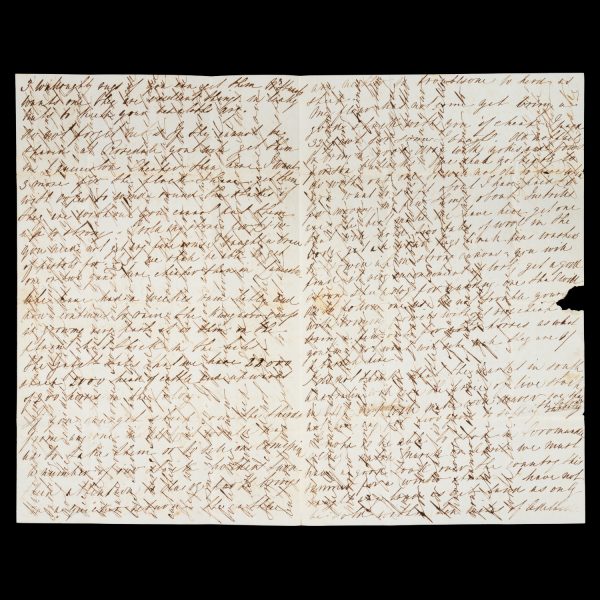 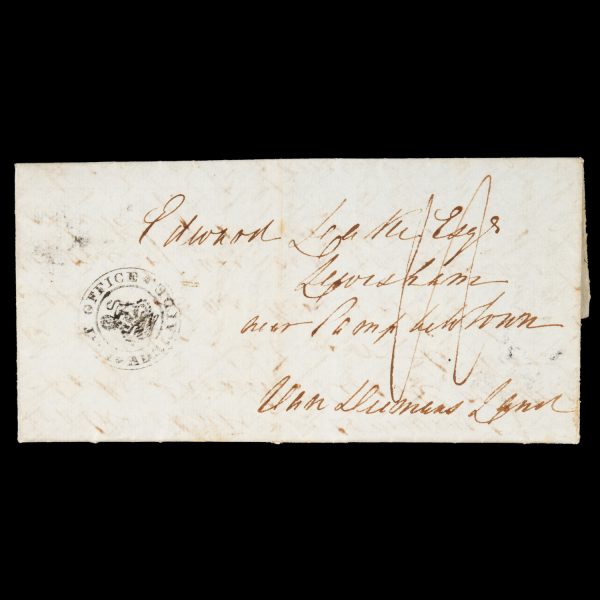 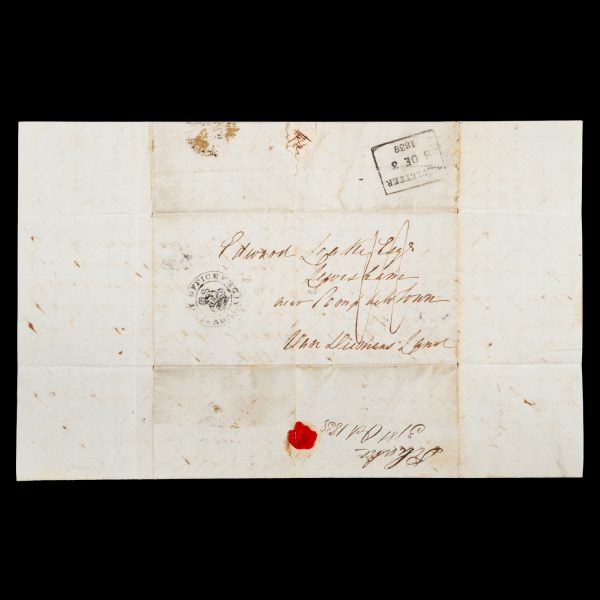 An unpublished and extremely early postmarked letter from the Colony of South Australia – which had been founded just two years earlier – from one of its prominent pioneer settlers, sheep farmer Robert Rowland Leake (1811-1860), to his younger brother in Van Diemen’s Land, Edward Leake (1813-1867). At the time of writing, Edward was about to join Robert in South Australia, and Robert’s letter is full of advice about preparations that should be made for the voyage over, including detailed instructions on how he should manage the landing of his sheep on arrival at Holdfast Bay. As squatters, the brothers would later establish Glencoe Station, near Mount Gambier in the South East of the Colony, and develop a vast pastoral empire. Robert Leake, who briefly served as the first member of the House of Assembly for the single-person electorate of Victoria in 1857, became known as the “Baron of the Frontier”.

Postal operations in South Australia commenced on 10 April 1837. There are only a handful of pre-1840 letters which survive in private hands. The sole postage rate was 1d regardless of destination or distance carried; this was paid to the ship’s captain. Although Melbourne was founded two years earlier than Adelaide, this postal item is contemporary with any of the earliest recorded Port Phillip District letters.

Robert and Edward had emigrated from Scotland to Van Diemen’s Land with their parents John and Elizabeth Leake in 1823. John Leake (1780-1865) brought one of the first flocks of Saxon Merino sheep to the Australian colonies, and he would go on to amass an incredible fortune through his pastoral activities and investments. He built a magnificent Italianate residence, Rosedale, on the Tasman Peninsula. Both Robert and Edward followed in their father’s footsteps and became graziers. In 1837 Robert was appointed as studmaster to the merino sheep owned by the South Australia Company.

Transcript of Robert Leake’s letter to his brother Edward:

I have moved my flock to Coromandle [i.e. Coromandel] village. It is eight miles from Holdfast, so that I shall not be able to give you that immediate attention you may require on landing your sheep. I shall request Mr Anthony to give you what assistance and information he can in landing the sheep. Coromandle village will be a good place for the sheep in the summer. The grass is quite green and deep. What few things you bring have them so that you can get landed at Holdfast Bay. You will want a week’s provisions for yourself and men on first landing. You must endeavour to let me know when you arrive as I may not hear of your arrival for a week after. Bring another grindstone with you, I was obliged to sell mine it being at Glenelg when I moved into the hills.

[p.2] [Bring] 3 walloughby rugs if you can get them. Mr. Harrop wants one. They are excellent things in leaky huts to keep your bedclothes dry. Do not forget nets, if they cannot be spared at Rosedale you will get them in Launceston cheaper than here. I want 3 more for the flock I have. Get them with ropes to wind round the stakes; if they are without you cannot put them up so strong. I sold my stones for £1-10-. You need not get any fire arms, I bought a brace of pistols for £3. We shall be able to get one or two guns here cheaper than in Launceston. We have had a weekes rain lately and [it] now continues to rain. The Kangaroo grass is growing very fast, it is thin on the plains but thick in the hills. The Gazette states that we have 22000 sheep, 2000 head of cattle and upward of 200 horses in the Colony. If you can get sheep on the thirds from anyone in VDL it would pay us to take them or to sell on commission. A number of our stock holders turn their attention to dairy for it brings in a quicker return. The cattle

[p.3] are neither so troublesome to herd as sheep. My flour has not come yet, bring a good stock with you if cheap. I paid 32/- p. cwt for some I bought. Do not fail to bring a good dray with yokes and bows for six bullocks. We shall not be able to do without one. It will not do to hire when you want to shift about. I have paid £8 for moving my few things about. [Tr….] are the best make we have here, get one that will hold two bales of wool in the body. Get all your lugs, lynch pins and washers sown up in strong canvas, you will find it very inconvenient if lost. Get a good strong sheep dog for yarding, one that will no to follow one [of] us. Do not trouble yourself with bringing fowls without very cheap [price]. Bring a few oats for the horses as what you may not want will sell well, they are 8/- a bushel here.

I do not think that the market in South Australia will rise. The price of livestock in VDL will make corn dearer, we have not had any for two years to supply the Colony. I hope to be able to stop in Coromandle village until March or April. We must have a good look over the country this Sumer for a winter station. I have not bought any land as yet as [it can] only be sold within ten miles of Adelaide

[p.4] as yet. We must try and purchase where we are likely to be more around, when we can afford it. Beside, the land sold about Adelaide is more adapted to the small farmer, you have not the power of choosing any fine piece of country that you may have found until the surveys reach it, without you take a special survey of 4000 acres. Colonel Gawler is Resident Commissioner as well as Governor, he will let the Radicals know that as Governor he appears to be a man of firmness. G. M. Stephens, late acting Governor, is Colonial Secretary. Bring over two good mares. It is know use paying freight for bad stock. Saddles you will get here. If you arrive about Decr. your Capt. may get some assistance from the [Sarrys?] and [Perton?] in [B….] and boats in landing the stock, they having large boats.

[p.5] Have every thing well settled with your Capt. before sailing for its no use finding fault at sea, things can not be remedied there, besides it [is in] your interest to keep friends with him as he may be very awkward with you when landing your stock. Do not have your horses swam on shore. Have the sheeps legs tied so that you do not lose them on the beach, it being scrabbly, and as soon as a boat load is landed cut them loose and drive them over the sand bank, then they will not get at the salt water. Boats will take from 30 to 70. If you have an opportunity of writing do let me know a week or two before you sail. Do so as I will keep a good look out for you. I was sorry I could not stop at the Bay to receive you but grass was getting so burnt up and the grog shop was so near and so many persons about. The Governor is going to give the natives a dinner tomorrow. I do not think we shall have any thing to fear from them. Those about town are very friendly. If Arthur would like to come over and intends settling in then I should advise in coming over with you, for we as a body should be able [to] do much better; for what is a little toil for the first when you have every prospect of making a fortune, which really you can do. One of us can go over next summer to fetch more stock if advisable.

With love to all at home, [xxxx xxxx], I remain your affectionate brother, Robt. Leake’.