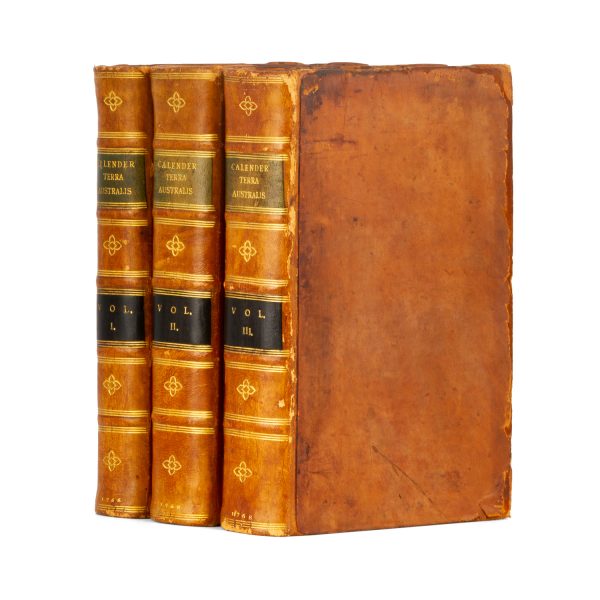 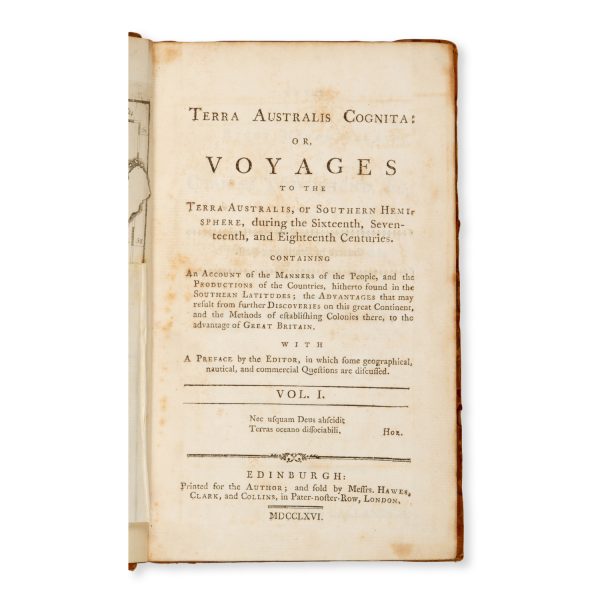 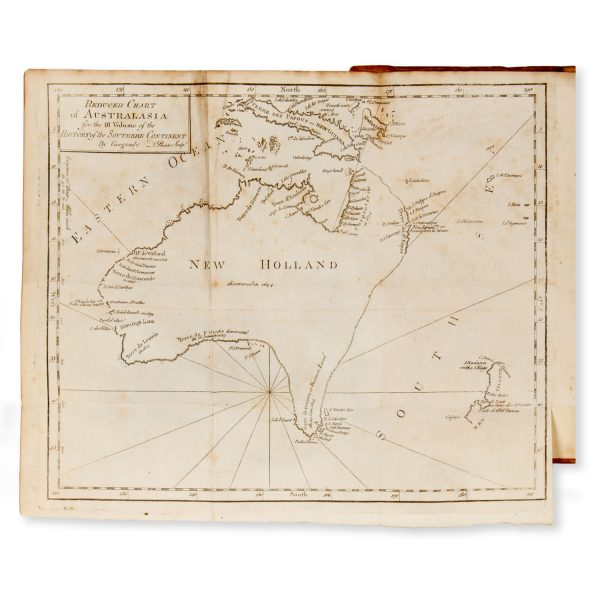 Terra Australis Cognita : or, voyages to the Terra Australis, or Southern Hemisphere, during the sixteenth, seventeenth, and eighteenth Centuries.

Containing an account of the manners of the people, and the productions of the countries, hitherto found in the Southern latitudes; the advantages that may result from further discoveries on this great continent, and the methods of establishing colonies there, to the advantage of Great Britain. With a preface by the Editor, in which some geographical, nautical, and commercial questions are discussed. Edinburgh : printed for the author, 1766-68. Three volumes, octavo, contemporary calf (rebacked and corners re-tipped), contrasting morocco title labels and gilt ornamentation, Davidson bookplate to the pastedown of the first and third volumes, vol 1: folding frontispiece map, pp. v (with the Townshend dedication leaf); 2 (advertisements), viii; 516; vol. 2: folding frontispiece map, pp. [iv]; ii; 692; vol. 3: folding frontispiece map, title page, pp. iv (with the Dundas dedication leaf); 745; occasional foxing, a very good set.

Callander’s important collection of early voyages to the Southern Hemisphere, including his proposal for the British settlement of Australia, based on de Brosse’s Histoire des navigations aux Terres Australes, as well as the works of Hakluyt, Purchas, Thevenot and others. It includes accounts of sixty-three voyages, including those of Magellan, Drake, Quiros, Le Maire and Schouten, Tasman, Roggeveen, Vlamingh, Anson, and Byron.

With the three important maps as issued, the map of the Australian continent being ‘of great interest particularly when compared with the Tasman map of 1644. Although Van Diemen’s Land is still shown as part of the mainland, New Zealand and New Guinea are already known to be separate lands and in fact the outline of Australia is complete except for the eastern coast, yet to be charted by Cook’ (Davidson).

The first volume contains the first state dedication leaf to Townshend, indicating an early issue. After Townshend’s death in 1767 a replacement dedication leaf was issued for Sir Laurence Dundas, which is contained in the third volume.

Accompanied by a set of the facsimile edition (Nico Israel, 1967).