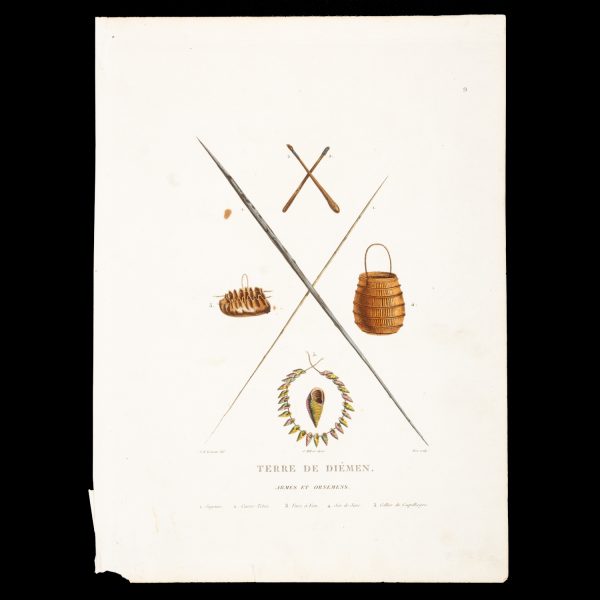 A fine and striking portrait of indigenous weaponry and adornments from Tasmania, sourced from the second edition of the atlas of the Baudin expedition, published in 1824.

Baudin’s two ships, the Géographe and the Naturaliste, left Le Havre on 19 October 1800. Having sailed for New Holland from Mauritius early in 1801, the expedition sighted Cape Leeuwin on the southwest coast of Australia on 27 May 1801. After exploring Rottnest Island and the Swan River the two ships became separated, but both continued north along the coast independently, eventually arriving in Timor in August and September.

In November 1801 the Géographe and the Naturaliste sailed south once more for Cape Leeuwin, and from there Baudin headed to Tasmania and charted much of the east coast of the island. The Naturaliste, under Hamelin, then crossed Bass Strait and surveyed Western Port, before continuing north to Port Jackson. Baudin’s ship, the Géographe, proceeded to chart the part of the southern coastline of the Australian continent known as Terre Napoleon, famously meeting Matthew Flinders at Encounter Bay in April 1802. Baudin then returned to Port Jackson by way of the southern coast of Tasmania.

From Sydney, Hamelin returned to France with the Naturaliste, while Baudin, in the Géographe, in company with a newly acquired small vessel, the Casuarina, under the command of Louis de Freycinet, continued the expedition’s hydrographic work. Baudin and Freycinet surveyed and charted King Island, Kangaroo Island, the Gulf of St. Vincent, and King George’s Sound, before travelling north along the Western Australian coast and eventually arriving at Timor early in May 1803. After again visiting the northwest coast of Australia they commenced the homeward voyage for France. Baudin, however, died en route at Mauritius, and the expedition, under the command of Milius, finally arrived at Le Havre in the Géographe in late March 1804.