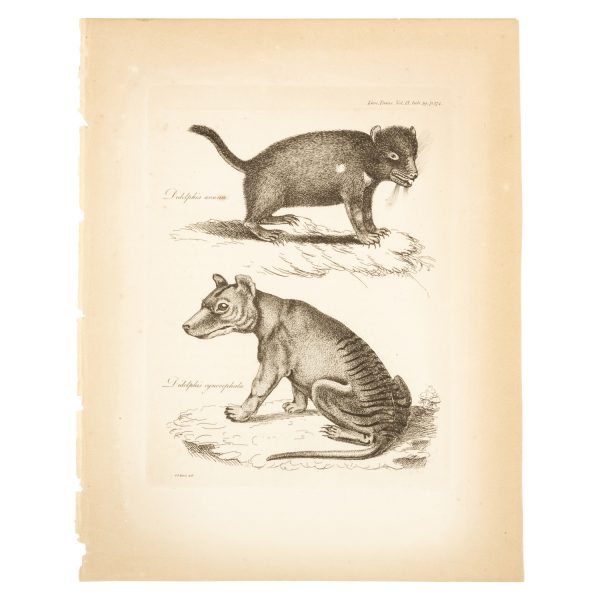 The first published image of the Thylacine and Tasmanian Devil

The first published image of the Thylacine and Tasmanian Devil.

‘The first European illustration of a thylacine was modeled on an injured animal caught in a trap. It is a sad embodiment of initial contact between Europeans and colonial fauna. The thylacine is pictured with a Tasmanian devil that was loaded onto a ship for transportation to England, but died before the vessel left Hobart. The injured thylacine also died.

The image was published in volume 9 of the Transactions of the Linnean Society of London in 1808.The engraving was produced from a drawing by George Prideaux Harris, Deputy Surveyor-General of Van Diemen’s Land, as Tasmania was called until the middle of the nineteenth century. Harris sent his drawing to London with a letter to Sir Joseph Banks speaking of “descriptions of the life” of two species, which he considered were “in every respect new”. He classified the two animals in the same genus as opossums, naming the thylacine Didelphis cynocephala (dog-headed opossum) and the Tasmanian devil Didelphis ursina (bear opossum).

Harris’s notes explain that the thylacine was a male “caught in a trap baited with kangaroo flesh” and that it “remained alive but a few hours, having received some internal hurt in securing it”. His words and their syntax imply he found the situation somewhat distressing, but his fear is also apparent as he comments that the animal in the trap bore “a near resemblance to the wolf or hyæna” and that its eyes were “large and full, black, with a nictitant membrane, which gives the animal a savage and malicious appearance”.

This illustration and description encapsulate the anxieties and aspirations of early settlers in Van Diemen’s Land.’ – Imaging the thylacine, University of Tasmania, https://www.utas.edu.au/library/exhibitions/thylacine/abject.html