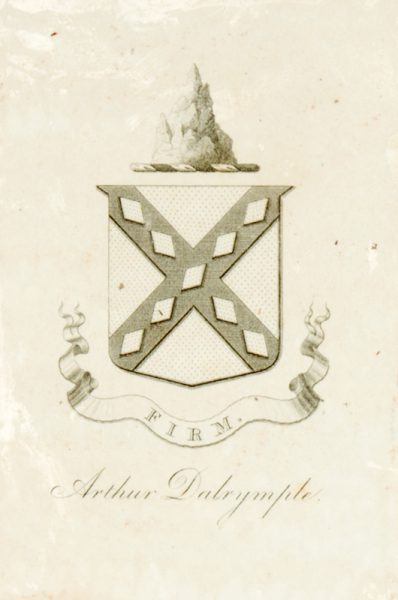 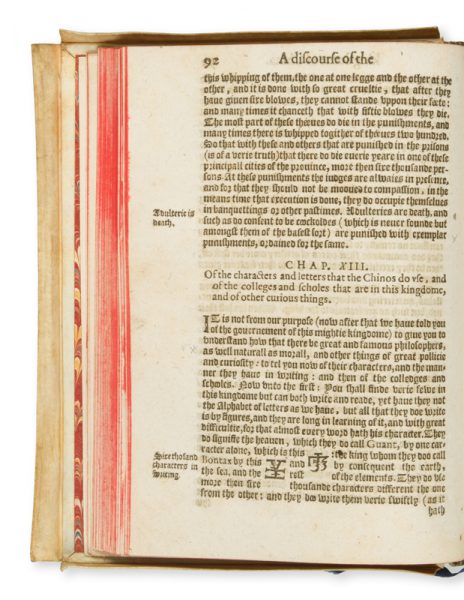 The historie of the great and mightie kingdome of China, and the situation thereof : togither with the great riches, huge citties, politike gouernement, and rare inuentions in the same. Translated out of Spanish by R. Parke.

London : Printed by I. Wolfe for Edward White, 1588. First English edition. Quarto, nineteenth century vellum over boards ruled in gilt (small stain to lower board), yapp edges; contrasting morocco title label with gilt lettering to spine; edges stained red; marbled endpapers with the bookplate of Arthur Dalrymple; pp [viii], 410; title page with early ownership inscription and pen trials; woodcut initials and tail-pieces; the text includes 3 woodcut Chinese characters (pp 92-3), the first to appear in an English book; some worming to the title page, the last 10 pages and a small section at the centre of the book, affecting a few letters.

A translation of Juan González de Mendoza’s Historia de las cosas mas notables, ritos y costumbres, del gran reyno de China, first published in Rome in 1585. The first English edition is a translation of the second edition (Madrid, 1586), and is regarded as one of the most significant and influential works on travel and exploration of the Elizabethan age. It is no coincidence that Parke undertook the task of translating the original at the instigation of his contemporary, Richard Hakluyt, compiler of the monumental and similarly influential The principal navigations.

The first part comprises a description of the various provinces of China and includes important accounts of Chinese customs, warfare, and printing methods; it also contains three woodcut Chinese letters, the first to appear in a European book. The second part is considerably wider in scope, and provides narratives of the major journeys of de Harrada to the Philippines (1575), the Franciscan de Alfaro to China (1578), and the Jesuit Martin Ignacio de Loyola (1581). The latter’s Commentarie of the New World is of immense importance, its highly detailed descriptions of visits to Mexico, Cuba, Puerto Rico, Jamaica and Santo Domingo making it one of the most authoritative travel accounts of the New World in this period.