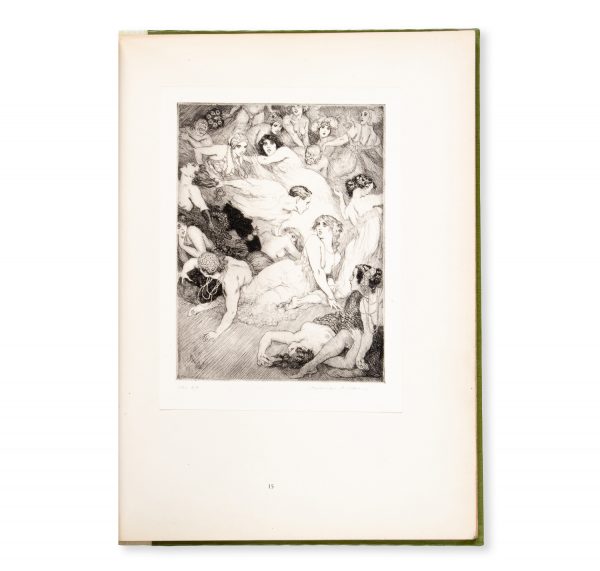 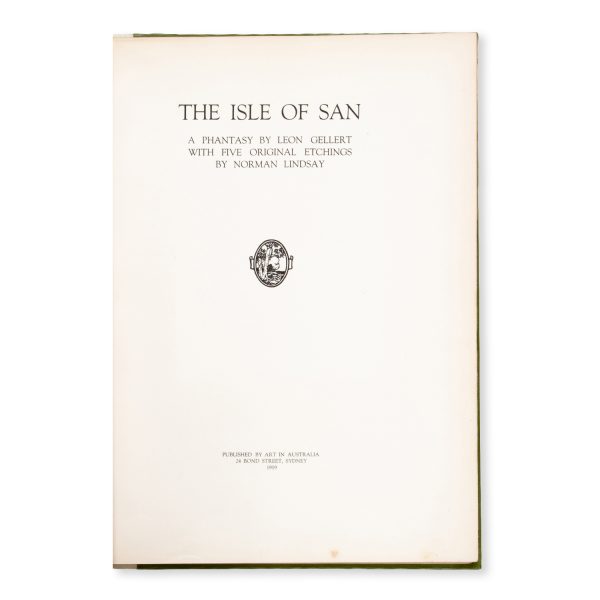 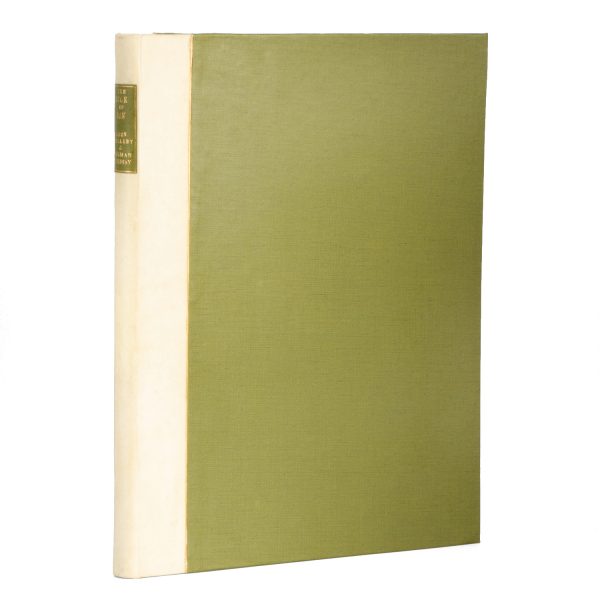 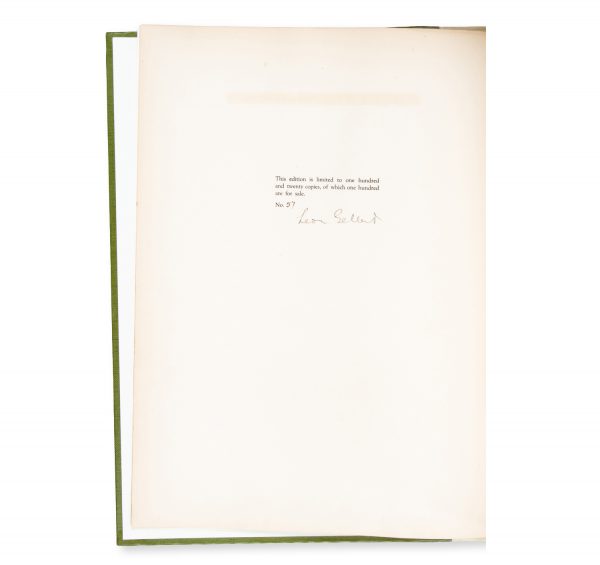 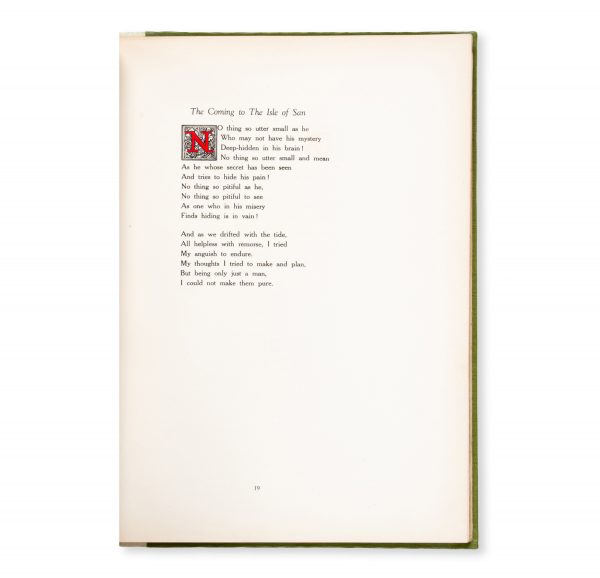 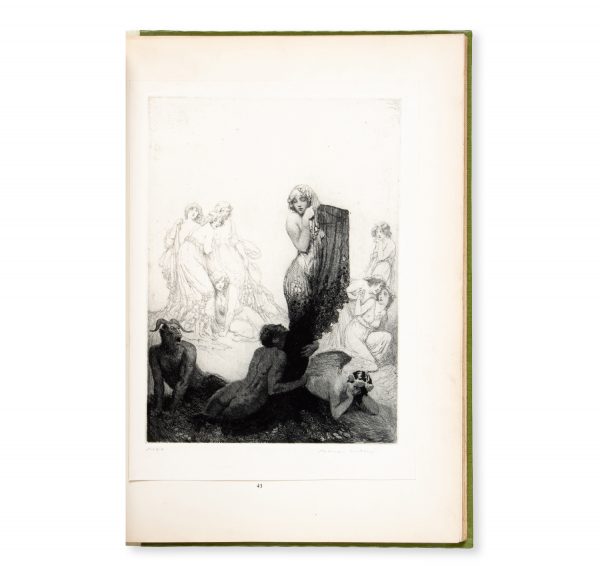 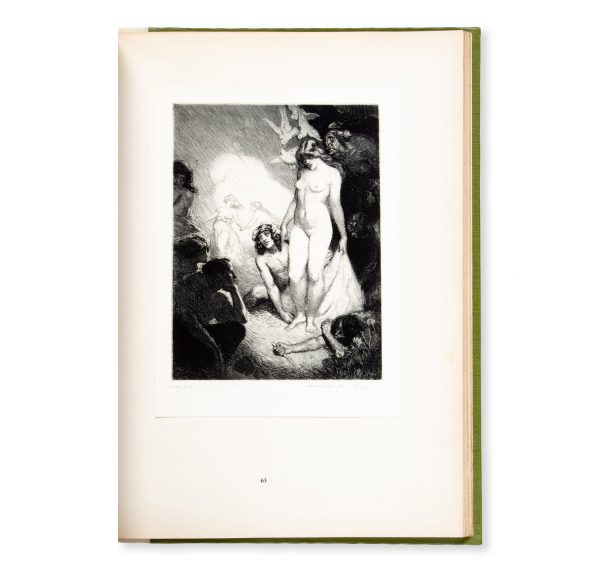 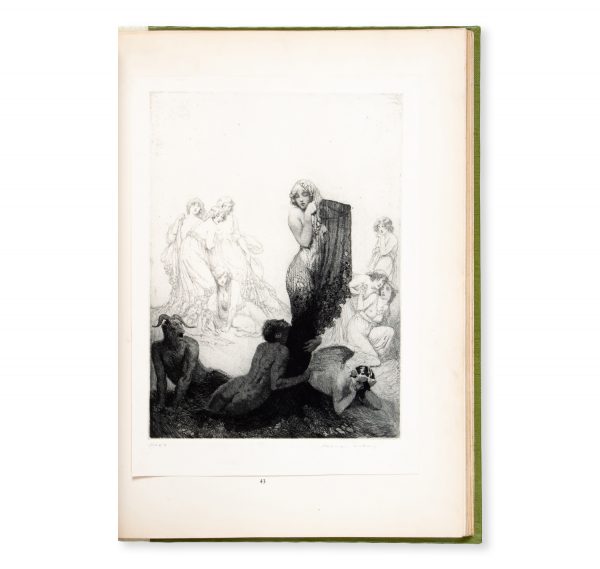 The Isle of San

A phantasy by Leon Gellert with five original etchings by Norman Lindsay. Sydney : Art in Australia, 1919. Folio, quarter-vellum over green cloth (expertly relined), new endpapers, A. H. Spencer bookseller label to front pastedown, pp 139 with initials printed in red, frontispiece portrait after an etching by Lindsay, five original large etchings with lettered tissue-guards by Norman Lindsay, each signed in full in pencil, occasional light scattered foxing, a fine copy. Limited to 120 copies of which 100 were for sale, signed by Leon Gellert.

‘The Isle of San was sold out in a single afternoon because Norman’s etchings were enjoying a boom.’ (Leon Gellert to John Hetherington, 6th January 1972, Hetherington papers, La Trobe MSS 9740/15).

Norman Lindsay had first collaborated with the young Adelaide-born war poet Leon Gellert in 1917, with sixteen of his pen illustrations accompanying Gellert’s text in the successful Angus & Robertson edition of Gellert’s Songs of a Campaign. After his discharge from active service Gellert was quickly accepted into the Lindsays’ intimate inner circle of artist and writer friends. The idea for Gellert’s fantasy The Isle of San had apparently come to him in his dreams. With its poetic landscape saturated with the themes of Beauty and the physicality of Love, it replaced the nightmare of the horrors of war which would have haunted Gellert since his experiences at Gallipoli, and was ideally suited to the sensuality and sexual power which permeated Norman Lindsay’s aesthetic vision. Lindsay was greatly impressed by its potential to become a book which would ‘stir in booklovers the lust of possession’. The cycle of fifty-two poems and its illustrations were produced concurrently, Lindsay setting to work with ardour on a small group of etchings for the proposed work, while Gellert honed the text. The five etchings would be printed by Norman’s wife, Rose. Despite the recent loss of a child during birth and subsequent septicaemia, Rose was recognised by Norman as the only person capable of printing the etchings precisely as he wanted. Rose eventually printed them in editions of 120. She later described one of the book’s famous illustrations, ‘The Grey-eyed Girl’, as ‘… the most difficult plate I have ever had to print, with its background of clear copper, which had to be hand wiped without touching the head of the girl. At that time I was not too good at hand wiping and did many prints, which I had to destroy. The difference in hand wiping is evident in the three proof pulls in the Mitchell Library folios, the background in the third proof being much clearer than the first and second’ (Rose Lindsay, Model wife, p 205). It is thought that The Grey-eyed Girl was based on Annie Brennan, the notorious Sydney bohemian and courtesan of legendary beauty and daughter of Gellert’s fellow poet, Christopher Brennan. In a letter to Jack Lindsay, it was even suggested by Ray Lindsay that Annie Brennan was Gellert’s main inspiration for the entire work (Ray Lindsay, A letter from Sydney, Melbourne : Jester Press, 1983, p 32).

The Isle of San is dedicated by Gellert to Sydney Ure Smith and Bertram Stevens; it was printed by Art in Australia, its first deluxe edition.