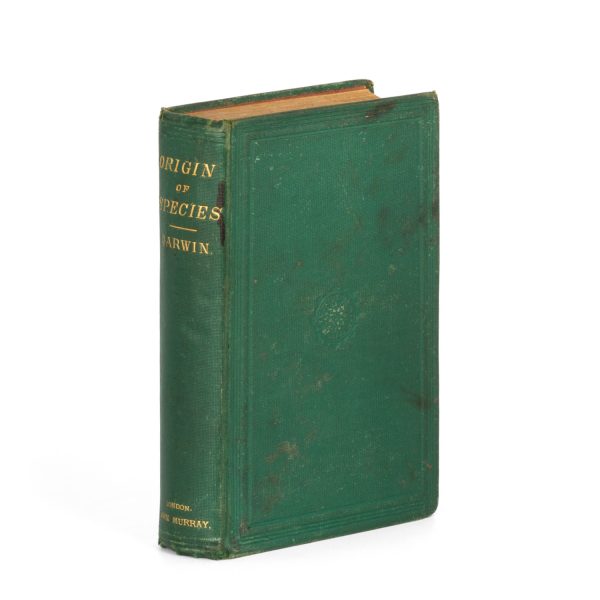 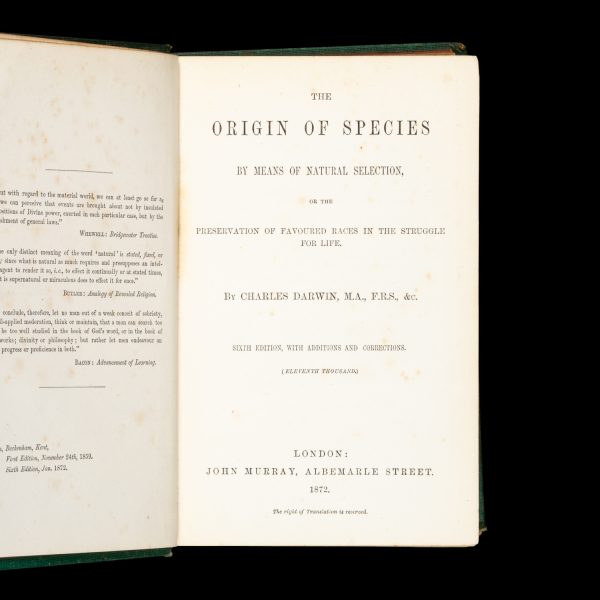 The origin of species

The first printing of the sixth edition – the final, authoritative edition of one of the most important texts in the history of science.

The first edition of 1859, a great rarity, is described in Freeman as “… the most important biological work ever written.”; Dibner, “… the most important single work in science.”; Printing & the Mind of Man, “… revolutionized our methods of thinking and our outlook on the natural order of things. The recognition that constant change is the order of the universe had been finally established and a vast step forward in the uniformity of nature had been taken”.

The sixth edition, extensively rewritten by Darwin, removed the word ‘On’ from the title ‘On the origin of species’ and includes rebuttal of Roman Catholic biologist St. George Mivart’s theological arguments in his 1871 text On the Genesis of Species. Printed in a run of 3000 copies, it is significant for including the use of the word ‘evolution’ for the first time in furtherance of Darwin’s argument for natural selection. It is the last edition published in Darwin’s lifetime and includes extensive revisions and rewriting by the author.

The sixth edition includes all Darwin’s revisions since On the origin of species was first released in 1859, and is considered the definitive text for what many consider to be the most significant scientific book ever published.

The present copy belonged to lifelong Sydney (New South Wales) resident Camden William Chisholm (1880-1964), son of Edwin Chisholm (1836-1921) and Emily Gardner (1839-1926). Chisholm’s interest in natural history is confirmed by the fact that, while residing at “Uyeno”, Woodward Avenue, Strathfield in 1922, he was appointed an Honorary Ranger for the Ku-ring-gai Chase National Park (see Government Gazette of the State of New South Wales, 1922, September 29).