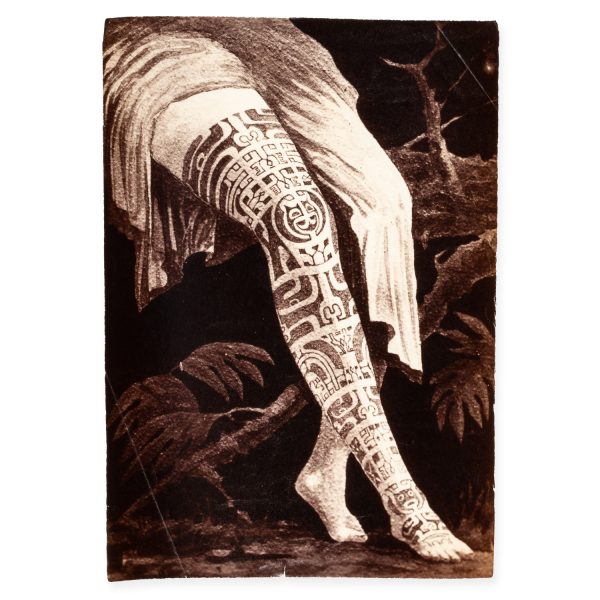 This rare photograph by English-born Papeete photographer Mrs. Sophia Hoare is of a drawing of the tattooed leg of Queen Vaekehu of Nuka Hiva. The original drawing was made in 1846 by a French lieutenant named Olivier.

In 1845 Vaekehu had been baptized Catholic, and after that turning point in her life she did not have any further body tattooing done as a mark of respect for her new religion. Nevertheless, her right leg was famed for the exquisiteness of its appearance. Mrs. Hoare photographed the drawing of Vaekehu’s leg and sold the small albumen prints as souvenirs to European visitors to Tahiti. Among these was none other than Robert Louis Stevenson, who met Vaekehu and acquired one of Mrs. Hoare’s prints of this image in 1888. Stevenson’s copy is reproduced in Robert Louis Stevenson’s Pacific Impressions: Photography and travel writing, 1888-1894, by Carla Manfredi (Cham, Switzerland : Springer, Palgrave Studies in Nineteenth-Century Writing and Culture, 2018, p. 60). The image was also later published in Frederick O’Brien’s Atolls of the Sun (New York : The Century Co., 1922, p. 343).

A number of nineteenth-century commentators made allegations to the effect that after her conversion to Christianity, Vaekehu killed and ate her husband, Temoana; however, claims relating to her continued practice of cannablism have never been substantiated.

Manfredi provides an illuminating discussion of Mrs. Hoare’s photograph and its context (ibid, 59-62), while O’Brien (ibid. 342-44) records the remarks of an indigenous informant regarding the significance of tattooing in Marquesan society:

‘”Tattooing in these islands,” said Nataro, “was usually begun upon those able to pay for it at the age of puberty; but there were many exceptions of tattooing commenced upon boys soon after their infancy or deferred until mature manhood. Illness, poverty, or other obstacle might prevent, and the desire of parents might cause early tattooing. The father or other relative or protector of the youth or girl paid the tuhuka but at the festivals even the very poor orphans were given opportunities to be tattooed by a general contribution, or the chief of the valley paid the fee. Years were occupied at intervals in the covering of the entire body of men, which was the aim; but many had to be content with having a part pictured, and often elaborate designs were  never finished. You see many bare places, meant to be covered when the tuhuka began his work. Queen Vaekehu was converted to Christianity with but one leg done and forewent further beautification to serve her new God. Though begun in boyhood, the full adornment of a man could hardly be terminated before his thirtieth year. During his lifetime of sixty years he might have it renewed twice, and as each pore could not be duplicated exactly the third coat would make him a solid mass of color, the goal of manly beauty. Though men usually sought to look terrible so that when they faced their enemies they would inspire fear, with women the sex motif was dominant,” said Nataro. “Girls with beautiful bodies and legs are much more attractive when tattooed, and we selected the best formed for the most elaborate designs. These were drawn so that, as the girls danced naked, the whole patterns were obvious, and those who were the most symmetrical won high honors in the great public exhibitions. If in the wide circle that chanted a utanw, while the old folks watched, a woman by exposing her beauty in a dance caused the voices of the young men to falter, or some one of them to become so entranced as to leap into the ring and seize her, she won a prize of acclamation for her parents which no other equaled. The dance stopped and all united in cheering the dancer. These beauties danced with their legs close together, so as to keep the design intact, lifting the heels backward and showing the shapeliness of figure and the fineness of tattooing.”‘