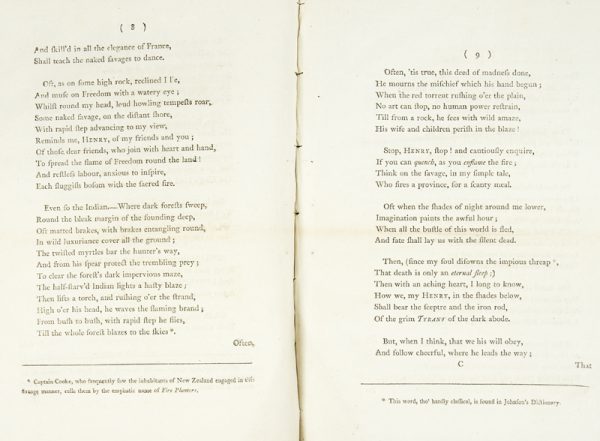 The telegraph; a consolatory epistle : from Thomas Muir, Esq. of Botany Bay,

to the Hon. Henry Erskine, late Dean of Faculty. [Edinburgh? : s.n., 1796]. Quarto, disbound, pp 11, [1], front with manuscript note in pencil referring to Muir’s handwriting and Hunter’s Hill, dated 1820, old horizontal fold throughout, otherwise a good copy. One of three variant quarto editions, this being the issue with signature B on page 5. Ferguson, 242.

Thomas Muir, a Glasgow lawyer, was one of a group of five radicals, known as the Scottish Martyrs, sentenced in 1794 to 14 years’ transportation for sedition because of his political views. He was a champion of free speech and universal male suffrage, and had tried to promulgate Thomas Paine’s The Rights of Man.

As one of New South Wales’ earliest political prisoners, Muir was permitted to bring his own money and was assigned two convict servants. As well as owning a brick house at Sydney Cove, he purchased a farm “across the water”, two miles distant. As Beverley Sherry has noted, the precise location and name of this property is not known (Beverley Sherry, Muir, Thomas, Dictionary of Sydney, 2012, http://dictionaryofsydney.org/entry/muir_thomas viewed 05 July 2016). The commonly held view that Muir had named his house Huntershill after his family home in Scotalnd, and that the suburb of Hunter’s Hill is named after his residence, is a misconception most likely based on an assertion made by Peter Mackenzie in his biography of Muir published in pamphlet form in 1831. The suburb of Hunter’s Hill was almost certainly named in honour of Captain John Hunter, who served as second Governor of New South Wales between 1795 and 1800. The pencilled note on the front of the present copy reads: “The vol. sent Mr. [xxxx] interleaved with white papers contains notes on the Laws of Scotland, in the hand writing of Mr. Muir of Hunter’s Hill [i.e. Huntershill, Scotland] – H.C. – 8 April 1820.”

Muir escaped from Botany Bay in 1796, and managed to reach France, where he died in 1799. This poem, addressed to Henry Erskine, a fellow radical who remained in Scotland, was actually written not by Thomas Muir but by Rev. George Hamliton, Minister of Gladsmuir. It describes the condition of the convicts and satirises Muir’s revolutionary political ideas. A reference is made on page 8 to the Aboriginal practice of lighting fires in the bush. The pamphlet can be dated by the fact that Erskine was not re-elected as Dean on 12 January 1796 – hence its “consolatory” nature.