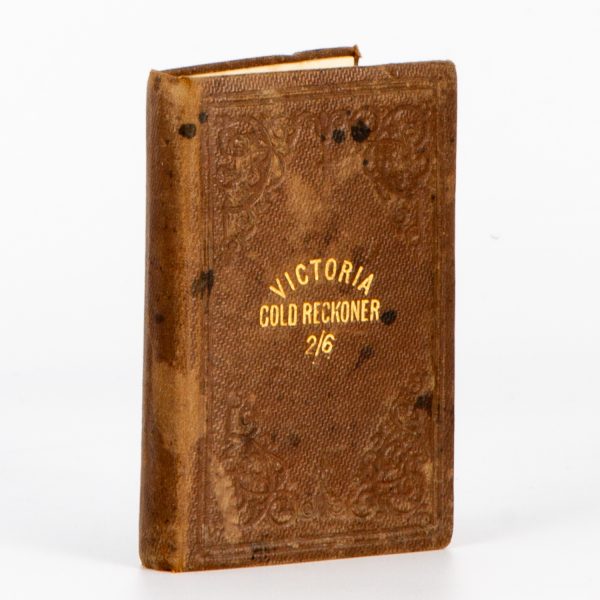 Carefully revised. Commencing at £3 and terminating at £4. 5s 9d per ounce. Melbourne: Sands and Kenny, 1857. Sextodecimo, cloth bound blind-embossed boards with gilt lettering to upper board, 218 pp, one gathering with soiling and wear from use, most liking during mining activities, advertisement endpapers, charming contemporary ownership inscription of a gold miner ‘A. Stevenson, Peg Leg, Maldon’, a very good example.

The Victoria Gold Ready Reckoner published by Sands & Kenny (bearing this imprint as the sole publisher) is only known in one edition, from 1857. Only two copies are recorded, held in the National Library of Australia and the State Library of Victoria, it was unknown to Ferguson. A variant 1857 edition, bearing the joint imprint of T & W Brown of Geelong alongside Sands & Kenny of Melbourne, was sold by us to a private collector in 2013.

Upon dissolution of the partnership of John Sands and Thomas Kenny in 1861, Sands formed a partnership with Dugald McDougall and a handful of Victoria Ready Reckoners were published in the 1860s and 70s bearing the imprint Sands & McDougall. An Australian Gold Ready Reckoner of identical pagination was also published in 1857, bearing a Sydney and Melbourne imprint of Sands & Kenny. The only recorded example was acquired from us by the Mitchell Library in 2011. This is an expanded version of the Australian Gold Ready Reckoner published in 1852 and again in 1854, of which there are only single examples recorded (both also reside in the Mitchell Library).

Sands & Kenny were the first Australian publisher to print a ready reckoner for the gold rush, with The Victoria gold valuer’s ready reckoner and assayer’s chemical guide (published in London by Orr in 1853), being the other handbook in general use to assess gold values. Any of the Sands & Kenny Gold Ready Reckoner colonial imprints from the 1850s are exceptionally rare, and in most cases, known in only one or two examples.

This diminutive publication, only the third known recorded, is something of a nugget in itself – an ephemeral personal artefact from a prospector in the Australian gold rush of the 1850s, as well as being a colonial printing rarity.