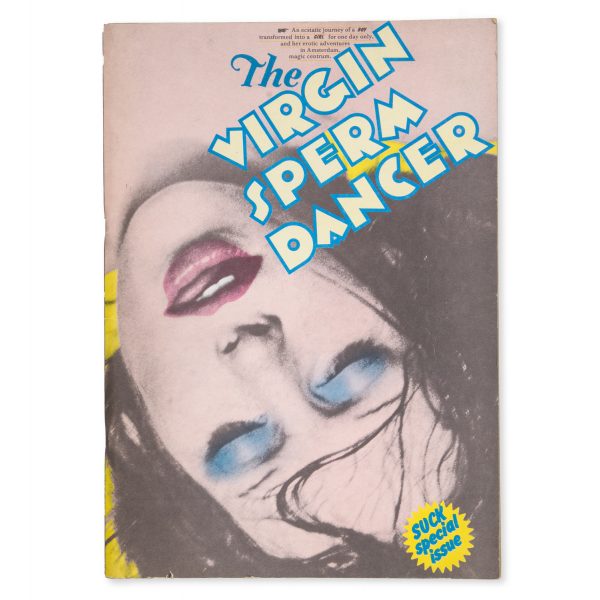 A classic publication from the age of sexual liberation, The virgin sperm dancer is an early photobook which illustrates the story of Joop, a young Dutch man who experiences a day transformed as Joopie, a sexually awakened woman. Published as a Suck Special Issue of the Amsterdam-based pornography magazine Suck, The virgin sperm dancer clearly aims to titillate with its uncensored graphic photographs of the escapades in this fantasy. However through the lengthy narrative and exploration of the versatility of sexual experience, Sperm Dancer finds itself as a prototype for later works that explore sexual freedom and concepts of gender. Through depictions of free love in Amsterdam in the 70s with a focus on transsexuality, bisexuality, transvestism, and homosexuality, Sperm dancer avoids gender paradigms of masculinity and power, and includes women’s sexual empowerment and orgasm as a focus of the work. Unusually for a sex magazine, this standalone publication does not appear to pitch its eroticism to a particular sexuality but rather embraces the versatility of sexual experience as being its greatest appeal.

The virgin sperm dancer was immediately influential and homaged on the cover of the September 1972 issue of London Oz. A second edition was published in 1978. Suck is touted as the first European sex newspaper and was launched in London in 1969 before moving to Amsterdam to avoid England’s anti-obscenity laws.

No edition of The virgin sperm dancer appears in the catalogue of Australian public libraries.