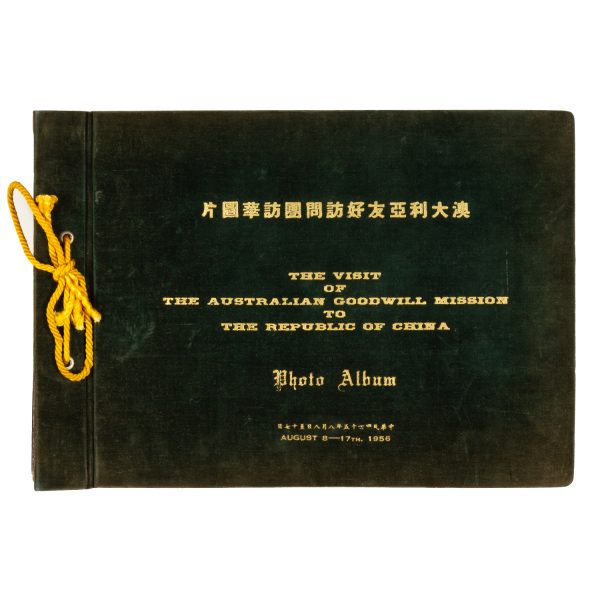 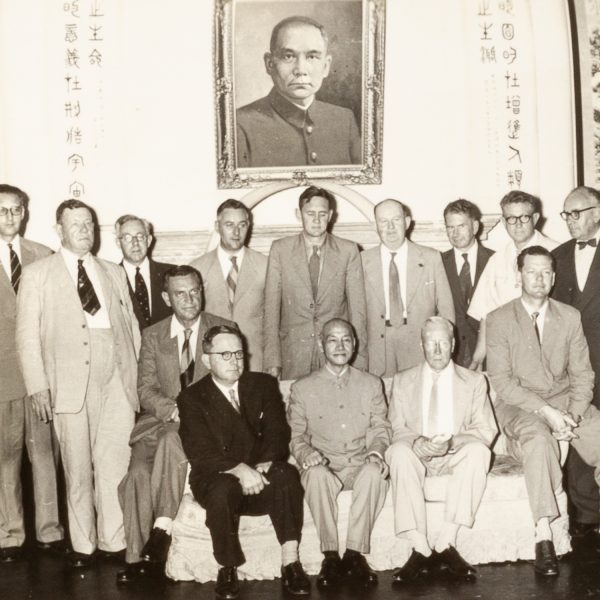 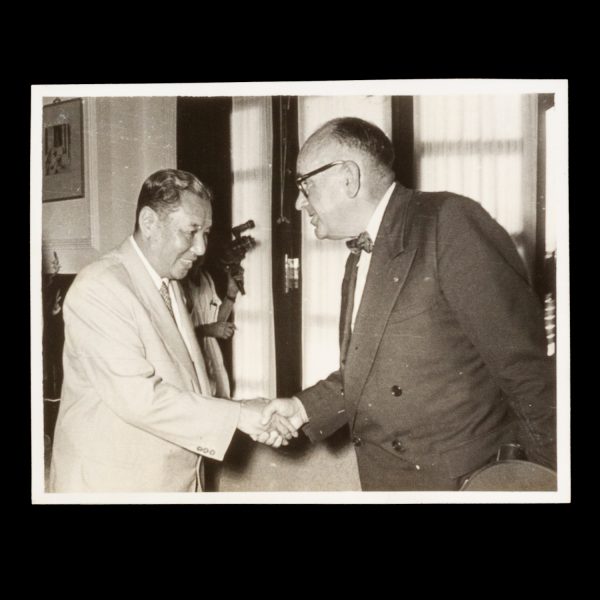 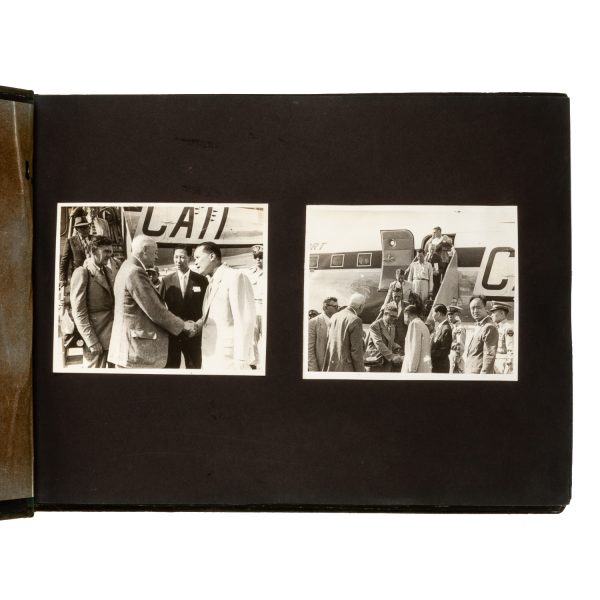 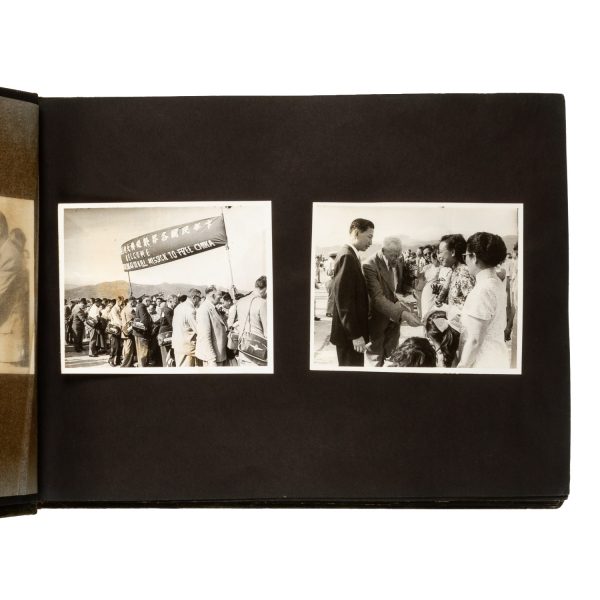 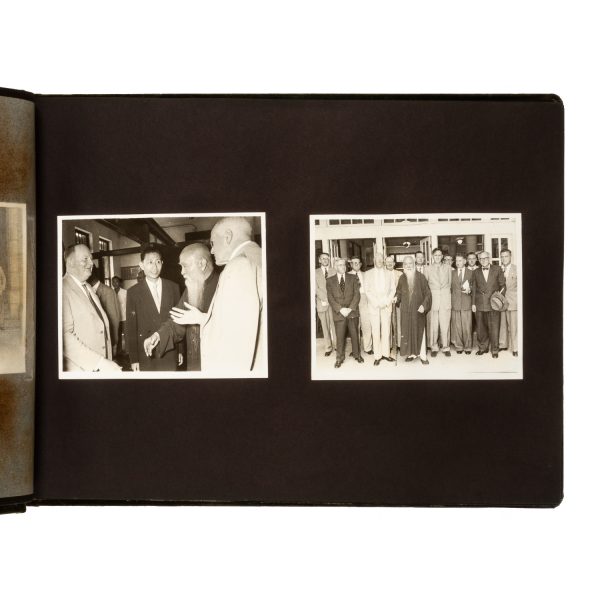 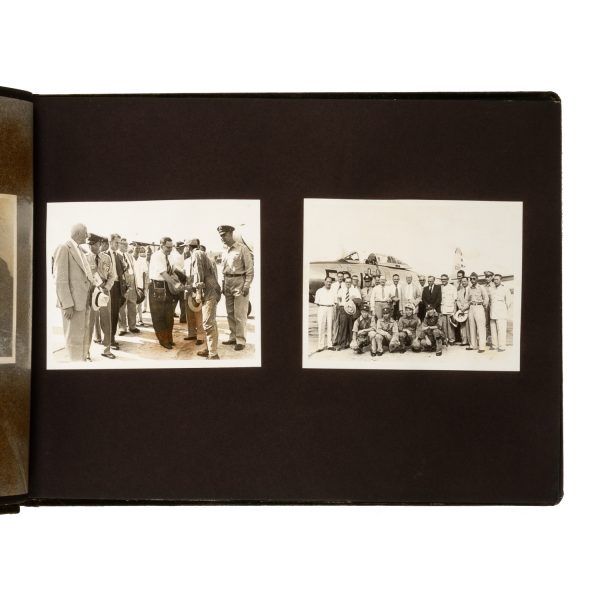 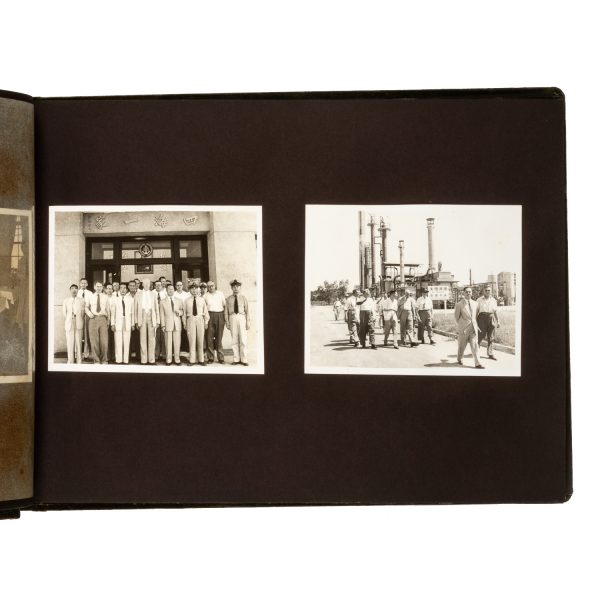 The Visit of the Australian Goodwill Mission to the Republic of China, August 8-17th 1956. Photo Album.

[Cover title]. Oblong folio (240 x 350 mm), green velvet over boards with gilt-stamped lettering in Chinese and English to front (clean and bright), original yellow silk ties, with [93] glossy b/w photographs in format 100 x 120 mm, mounted on [47] pages; the photographs are uncaptioned but provide a comprehensive visual record of the historically significant Australian bipartisan delegation’s visit to Formosa (Taiwan) shortly before the Melbourne Summer Olympics, covering meetings with Republic of China dignitaries, official dinners and speeches, folkloric concerts, visits to military installations and factories, museums, libraries and cultural sites; the contents of the album are in superb condition, with the original tissue guards intact.

A rare and important photograph album of which we can trace no other example in institutional collections. Presumably, this and similar albums were presented to each of the twelve members of the Australian Goodwill Mission, which was led by former Chief Justice of Australia, J. G. Latham.

At least one of the photographs – a significant group portrait of the Australian parliamentary delegation with Chiang Kai-shek including the so-called ‘Friends of Taiwan’ J. G. Latham, W. C. Wentworth, Donald Willesee, Reginald Turnbull and John Gorton – is held in the Papers of Sir John Latham, National Library of Australia.

From the Parliament of Australia website (Facing Asia: Changing Parliamentary Attitudes towards China 1934–1989):

‘Before examining the moment, some decades later, when Australia softened its anti-communist stance, it is worth noting two significant acts of Cold War diplomacy: the visit of a parliamentary delegation to Formosa (Taiwan) in 1956 and the establishment of an embassy in Taipei in 1966. An Australian Goodwill Mission, composed largely of federal parliamentarians, travelled to Formosa in 1956. The Mission was led by J. G. Latham and included eight federal parliamentarians (three from Opposition), one state parliamentarian, an academic and a former military officer. The Mission took place at a time when both Chinese governments were busily courting Western visitors. The Nationalists were actively engaged in developing sympathetic ears in the West and the Goodwill Mission became part of this effort—at a time when the Australian government was attempting to restrict, even prevent, contact with communist China. While the Mission sent a strong message of support to the Nationalists, Latham sought to temper the significance of the visit claiming: ‘We did not represent any party or organisation or government. We were simply a small group of actively interested individuals’. Despite Latham’s declarations, the delegation had access at the highest levels, and on 9 August 1956, Latham met with President Chiang for an hour-long conference. The active diplomacy that was being exercised by the Nationalists during this period helped foster a number of sympathetic voices within the Parliament. ‘Friends of Taiwan’ included the unofficial head of the Taiwan-lobby for much of the 1950s and 1960s, Liberal Member for Chisholm, Wilfrid Kent Hughes, as well as: D. J. Killen, K. E. Beazley, W. C. Wentworth, Stan Keon (who had abandoned the ALP for the DLP) and John Gorton.’