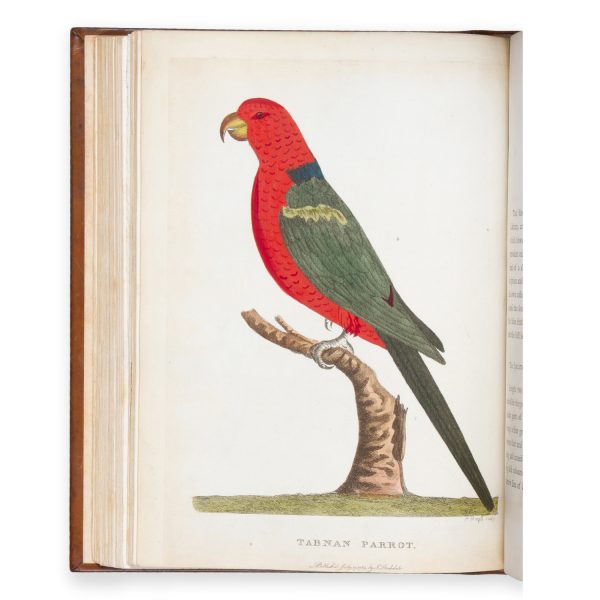 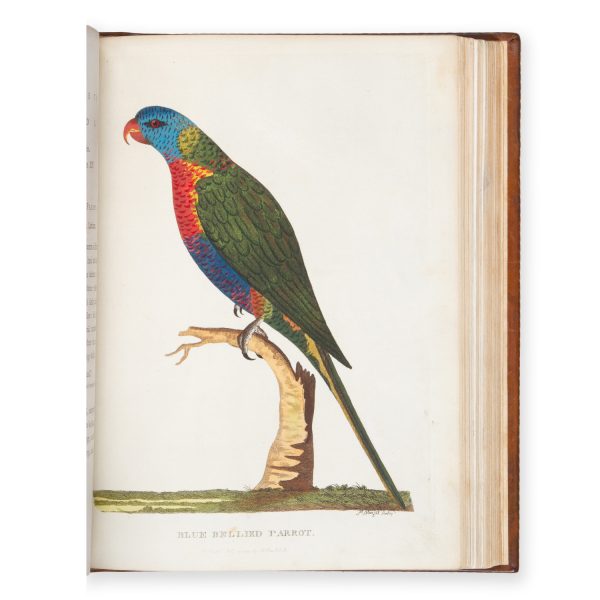 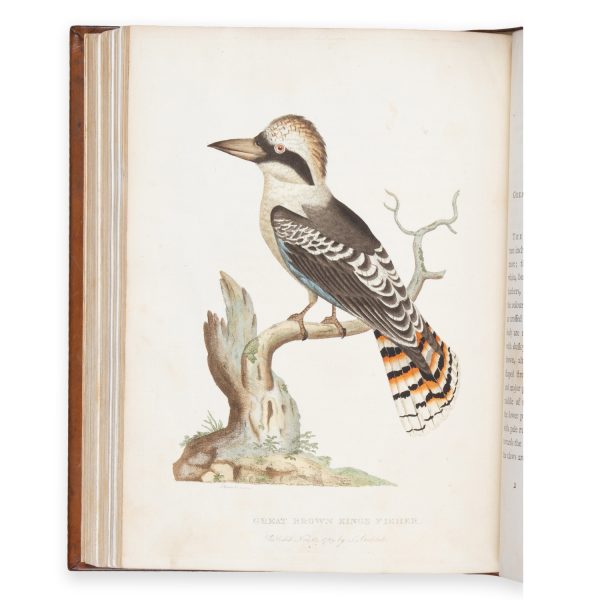 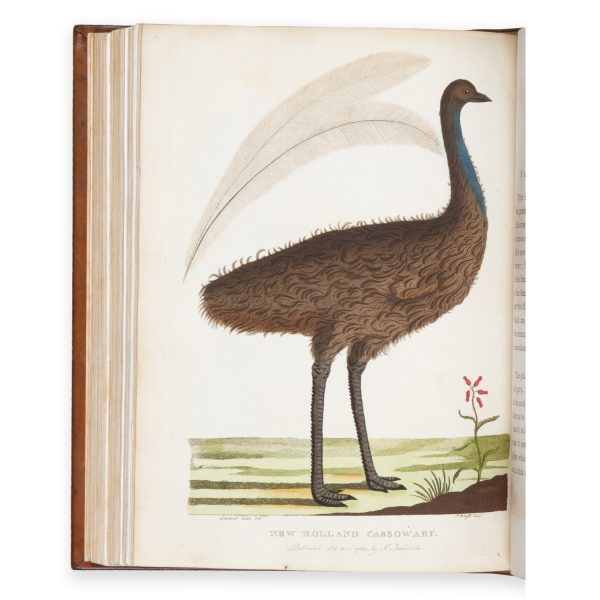 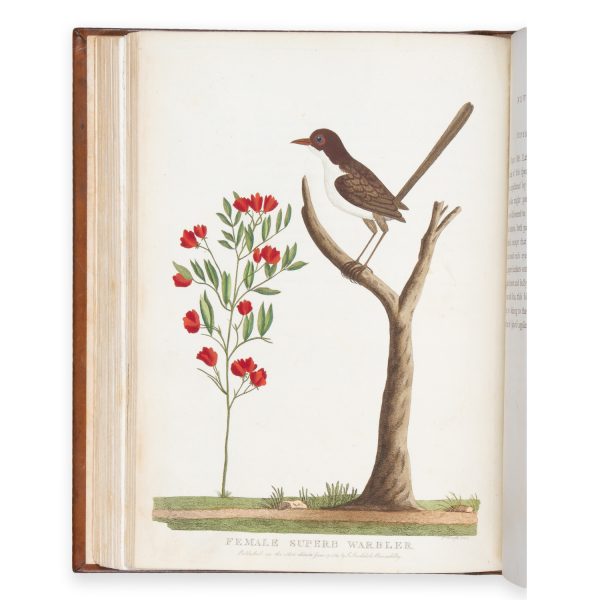 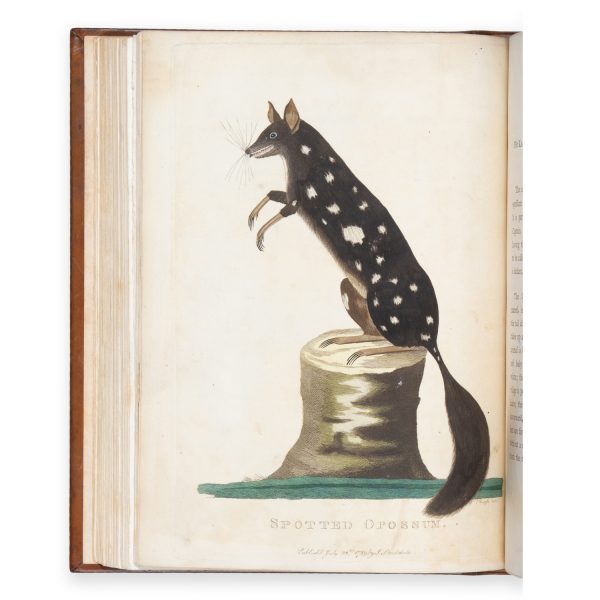 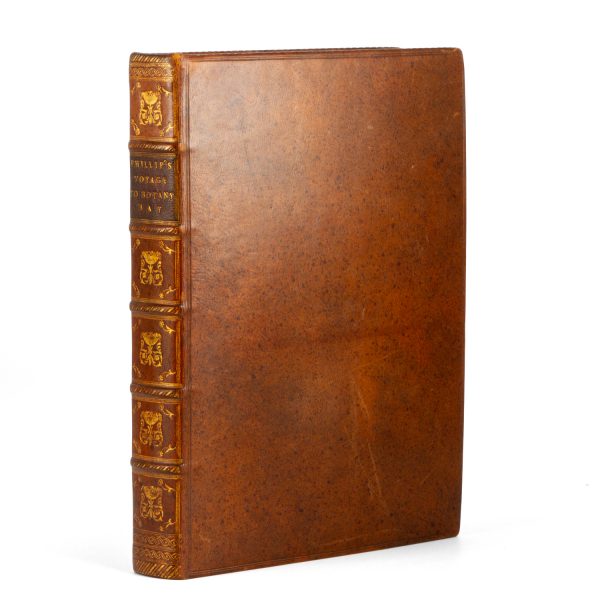 The Voyage of Governor Phillip to Botany Bay (coloured edition)

with an account of the establishment of the Colonies of Port Jackson & Norfolk Island; compiled from authentic papers, which have been obtained from the several departments, to which are added, the journals of Lieuts. Shortland, Watts, Ball, & Capt. Marshall; with an account of their new discoveries. London : John Stockdale, 1789. Quarto, full speckled calf, spine ruled and lettered in gilt, frontispiece portrait; engraved title (in the first state, with the name of the artist Henry Webber); pp 6, [errata; blank], viii, [8 – list of subscribers], [3 – list of plates; blank], x, 298, lxxiv, 54 engraved plates & charts (31 hand coloured as called for, a few charts strengthened along the folds, two charts slightly shaved), bound with the advertisements (often lacking); sparse foxing, occasional toning as usual, a very good copy.

THE DELUXE HAND COLOURED EDITION OF THE RAREST AND MOST DESIRABLE FIRST FLEET BOOK.

Published in London the year following the successful arrival of the First Fleet in New Holland, Stockdale’s work is the most detailed early account of the arduous voyage and is considered the foundation book of Australian settlement. Compiled, with an editor’s literary flourish, from Phillip’s official reports, as well as the journals of other officers in the First Fleet, this account describes the voyage from England and the first months at Port Jackson, a period extending from March 1787 to September 1788. It captures the administrative and functional challenges facing the fledgling colony, which were rendered all the more difficult by its remoteness and its spectacularly alien natural environment. The work describes the initial exploration of the Sydney region, its indigenous inhabitants, natural history and landscape. It includes the plan of Sydney Cove made by Dawes and Hunter, which is the earliest plan of the settlement of Sydney. It also includes the first published account of La Perouse’s expedition – it was due to Phillip that the documentation of the latter half of the expedition was saved.

The appendix contains a list of the convicts transported with the First Fleet, and is a major source for Australian genealogy. The list of subscribers attests to the anticipation surrounding the publication of this work: Thomas Pennant, John Latham, Joseph Banks, Alexander Dalrymple and George Staunton to name but a few.

The account is illustrated with several dozen plates, mostly after drawings and specimens sent back to London by Surgeon General John White. The work was published in two states, one with the plates uncoloured, and another in deluxe format, “the rare coloured issue of this classic, only a very few copies were produced in this form” (Hill). In deluxe copies the natural history plates were printed on laid paper, as here, and expertly coloured with watercolours.

“Any copy with contemporary handcolouring is a rarity.” (Davidson)

“Phillip’s writing was like the man himself: honest, direct and unaffected … It offers a full record of events both on land and on sea in the first months of the settlement, detailing the early expeditions of Philllip and the other officers into the interior around Botany Bay and Port Jackson … The importance of Stockdale’s Phillip must not be underestimated … [it is] a key work and essential to any serious collection of Australian books.” (Wantrup)