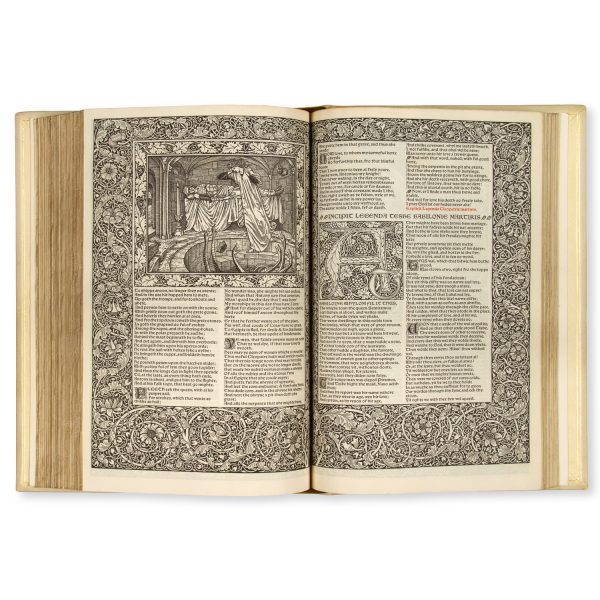 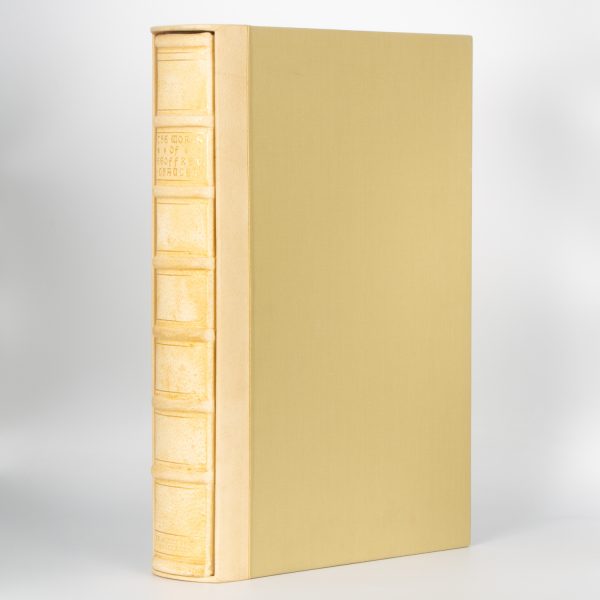 A fine, complete copy in full white pigskin of the Kelmscott Chaucer, recognised by many as the finest book printed since the Gutenberg Bible.

‘The Works of Geoffrey Chaucer published in 1896 by the Kelmscott Press was the culmination of William Morris’s vision for an ideal book. It embodied his love of medieval literature and art, as well as his love of beauty. Its vast scope and magnificence inspired his friend and collaborator Edward Burne-Jones to compare it to a “pocket cathedral.” William Morris and Edward Burne-Jones discovered and developed a love for Chaucer as undergraduates at Oxford University. After Morris established the Kelmscott Press in 1891, the two old friends agreed that The Canterbury Tales and other works by Chaucer would be a major goal for the enterprise. Morris spent four years working on the book. Trial pages were printed in 1892, while final production began on August 8, 1894. The first two copies of the book were delivered to Morris and Burne-Jones on June 2, 1896. Morris was already in failing health; he died four months later on October 3, 1896.’ (University of Maryland Library)

‘The Kelmscott Chaucer was not designed primarily as a scholarly text but as a work to celebrate the art of bookmaking; it finds its niche in medievalism rather than medieval studies, but as a work of art, few modern books can surpass its beauty.’ (University of Notre Dame Library).

The Kelmscott Chaucer was selected by Great Britain from among all the titles printed in the British Isles to present to the Japanese for the rebuilding of their National Library at the end of World War II.

Originally issued in quarter-linen over papered boards, the original bindings resembled the type of temporary bindings found on books when received from the publisher in the eighteenth and nineteenth centuries. A select number of copies were also available in full white pigskin from the Doves Bindery, under the supervision of Thomas Cobden-Sanderson by Douglas Cockerell and Charles McLeish. The board bindings rarely are found in fine condition due to the weight of the text block, and as such many, if not most, paper copies of the Kelmscott Chaucer have been rebound, often in designer or high quality bindings. The use of Sangorski & Sutcliffe, one of the great binderies, for the Kelmscott Chaucer, has a particular resonance with its publication history. ‘Francis Sangorski (1875 – 1912) and George Sutcliffe (1878 – 1943) met in 1896 at a bookbinding class taught by Douglas Cockerell at the Central School of Arts and Crafts. At the time Cockerell was working for Cobden-Sanderson at the Doves Bindery, but in 1898 he set up his own business and invited his two pupils to join him. In 1901 they established their own bindery.’ – Peterson, p. 218. It was Cockerell who worked on most of the pigskin bindings commissioned for special copies of the Chaucer, and who in turn passed his skills to Sangorski & Sutcliffe, who trained with Cockerell the year the Chaucer was published.

Without doubt, the highpoint of English private press in the nineteenth century, and one of the great books of the world.

Printing and the Mind of Man 367