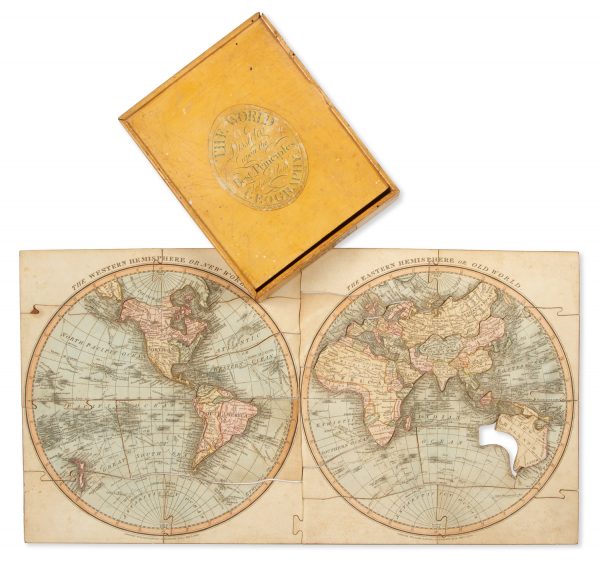 The world dissected upon the best principles to teach youth geography.

London : made by William Darton, 58 Holborn Hill, 1820. Jigsaw puzzle map of the world in two hemispheres, dissected and laid on mahogany, in the publisher’s original wooden box with sliding lid, paper labels to the lid and sides, ‘Darton, London. Warranted’; also titled ‘The world from the best authorities’.

The first known puzzle map was issued by John Bowles in 1759; John Spilsbury began manufacturing In 1767, and the London map seller, publisher and maker of board games John Wallis produced his first puzzle map, Darton’s Kings and Queens, in 1788. By the beginning of the nineteenth century the puzzle map had become a popular pedagogical aid. William Darton (1781-1854) was an engraver, mapseller, bookseller, publisher and printseller, active in London at the beginning of the nineteenth century. Apprenticed to his father in 1795, also named William Darton, he formed a partnership with his brother Thomas Darton in 1804, and established his business independently in 1810. The present jigsaw was advertised in 1809 together with dissected maps of the continents, England and Wales, Scotland, Ireland, and France. The maps of the continents could be had for 3s 6d, with the map of the world priced at 5s. All the maps came housed in a mahogany box with the publisher’s title as here. The map marks the tracks of all three of Captain Cook’s voyages; his death on Hawaii is marked with “Owhyhee I, where Capt. Cook was killed 1779”. The South Pole is shown, but without an indication of a land mass. Australia is labelled “New Holland”, with “Diemen’s Land” attached to the continent, and New South Wales extending the entire length of the east coast. New Zealand’s North and South Islands are both indicated in detail.

We can find only one example of this map held in institutions, an earlier edition dated 1811 in Princeton University Library.