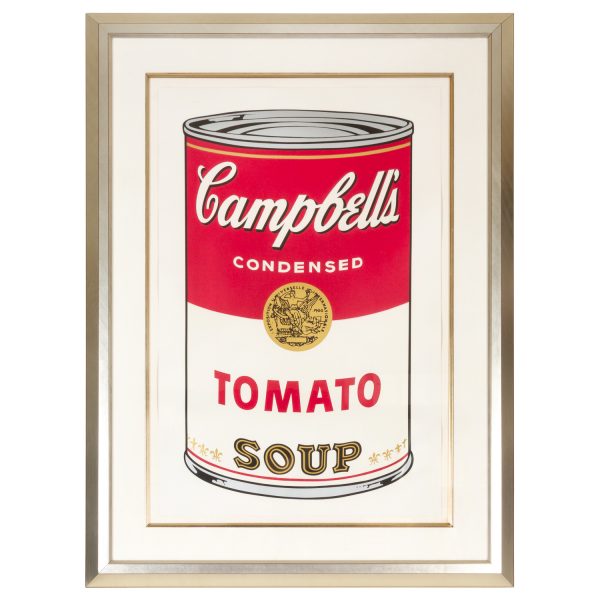 New York : Factory Additions, 1968. Screenprint in colours, on smooth wove paper, 813 x 476 mm (image), 891 x 588 mm (sheet), signed in black ballpoint pen on the reverse, stamp-numbered 33/250 (there were also 26 artist’s proofs lettered A-Z), from the series Campbell’s Soup I. Complete and untrimmed, the full sheet, printed surface in very good condition with the colour rich and strong, the sheet mounted to a backing sheet with textile tape and then to a canvas backboard, very slightly cockled due to the backing sheet, a fine example, framed.

The original icon of the pop art movement.

Andy Warhol first exhibited his Campbell’s Soup Cans as a series of 32 hand painted works in 1962 at his first one-man exhibition at Ferus Gallery in Los Angeles. Warhol’s background was in advertising and design, and when it was suggested to him he should paint something that everyone would recognise, he immediately thought of the iconic red and white labels, “I used to drink it, I used to have the same lunch every day, for twenty years’. The show was met with confusion and controversy, the mass-produced objects looking like nothing made by an artist’s hand. A few sold during the exhibition but were quickly purchased back by the gallery owner, who decided it was important to keep the collection together. These paintings are considered the originating works of the Pop Art movement and are now in the Museum of Modern Art, New York.

Warhol explored screenprinting while painting the Campbell’s Soup Can series, immediately drawn to its ability to replicate artworks and turn the artist ‘into a machine’. Warhol launched his printmaking business Factory Additions in 1967, where he would publish folios of screenprints of his most famous (and commercial) subjects. The first was his Marilyn series of 1967, followed by the Campbell’s Soup Cans in 1968. Each were a folio of 10 artworks, the Marilyn series of portraits of the movie star in a lurid combination of fluorescent colours, the Soup Cans a series of ten of the company’s most popular soups. The process of screenprinting allowed Warhol to create his Soup Can series as he had originally intended, as a series of near-identical images, appearing to be as mass produced as the cans themselves. The Campbell’s Soup Cans series ‘remain the most mechanical and uniform prints Warhol ever produced’ (Feldman & Schellmann (2015), p. 25.

Tomato Soup was one of the first soups manufactured by Campbell’s, and has always been its most popular, a household staple in nearly every home in America. This ubiquitous soup – more than the others – has come to symbolise Pop Art movement, as early as May 1969 Warhol was pictured drowning in a gigantic can of Campbell’s Tomato Soup on the cover of Esquire magazine.

Warhol would explore screenprinting throughout his remaining career, his studio ‘The Factory’ publishing hundreds of prints featuring famous celebrities and every day objects. Movie stars, politicians, queens and celebrities all had their portraits given the Warhol treatment, but since the beginning, his most famous portrait has been that of the soup can.