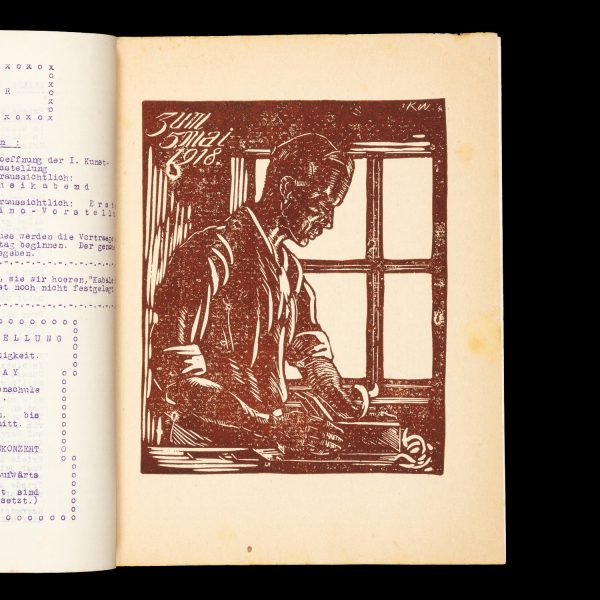 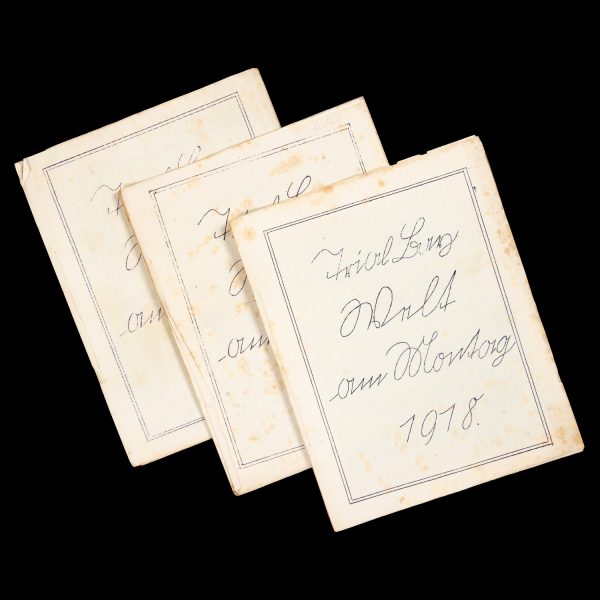 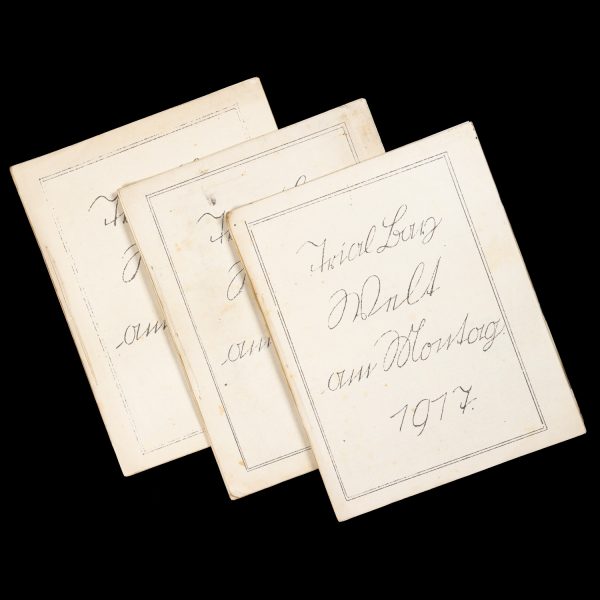 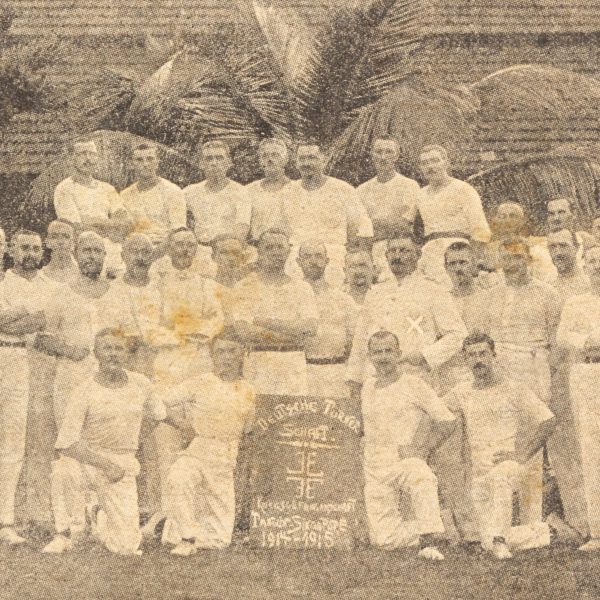 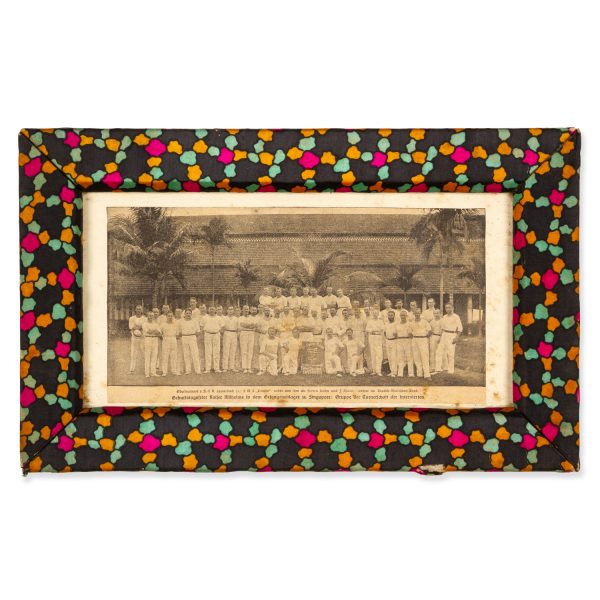 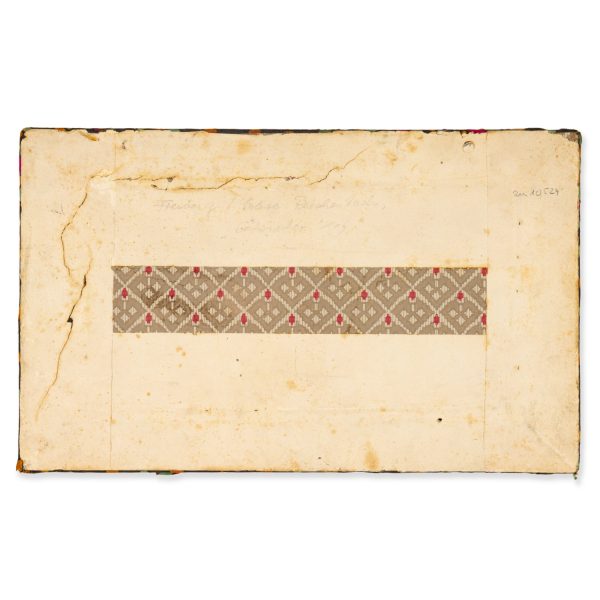 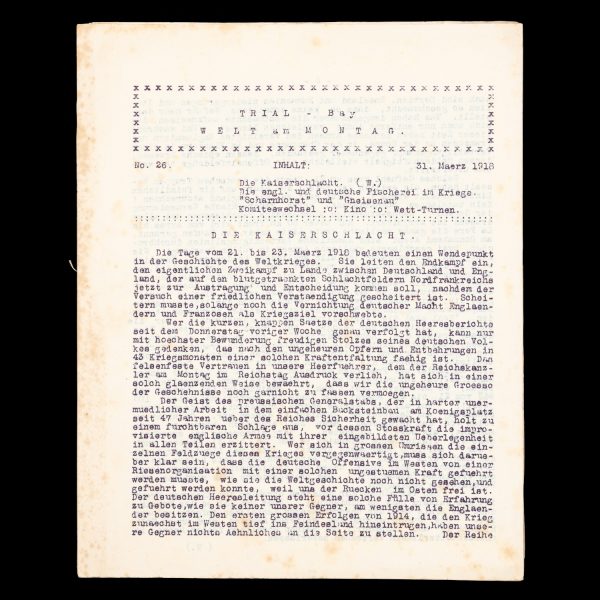 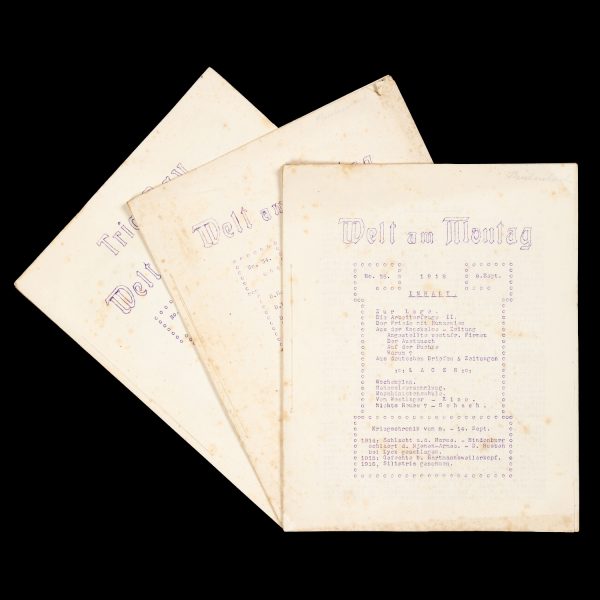 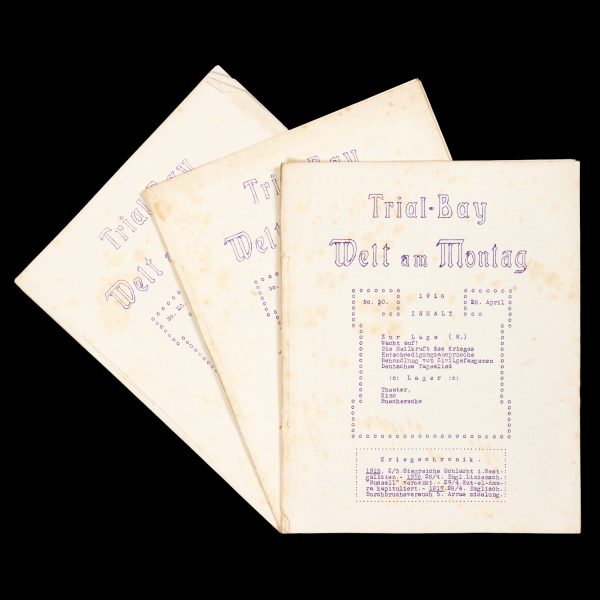 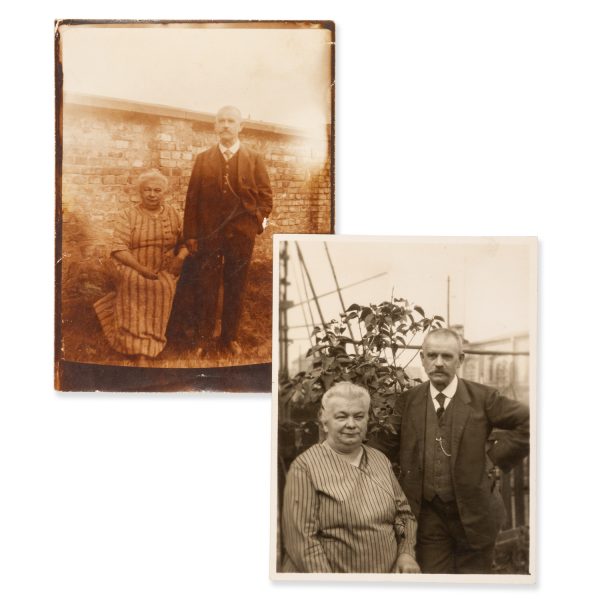 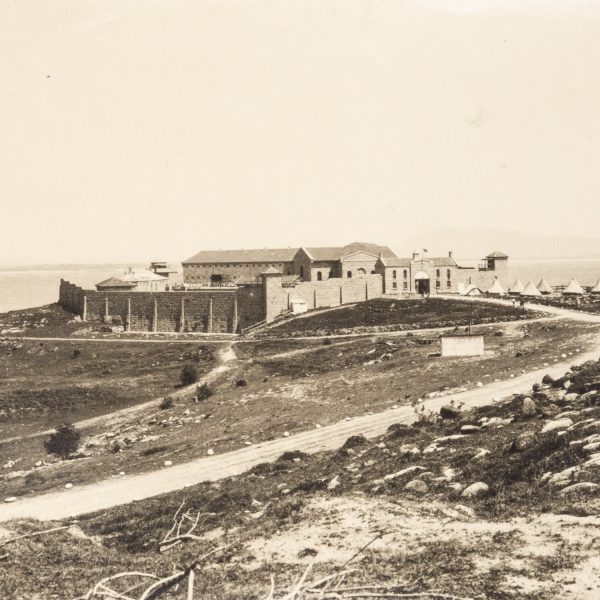 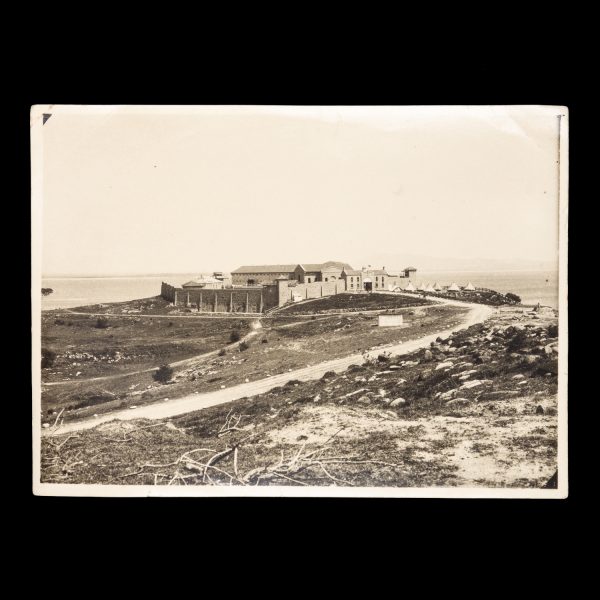 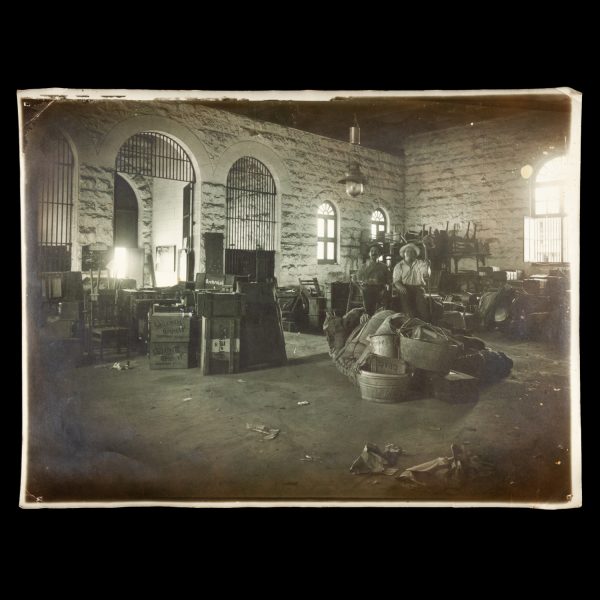 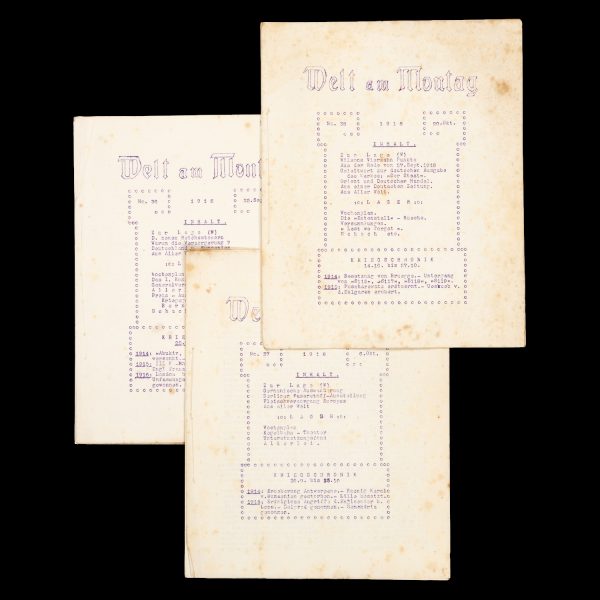 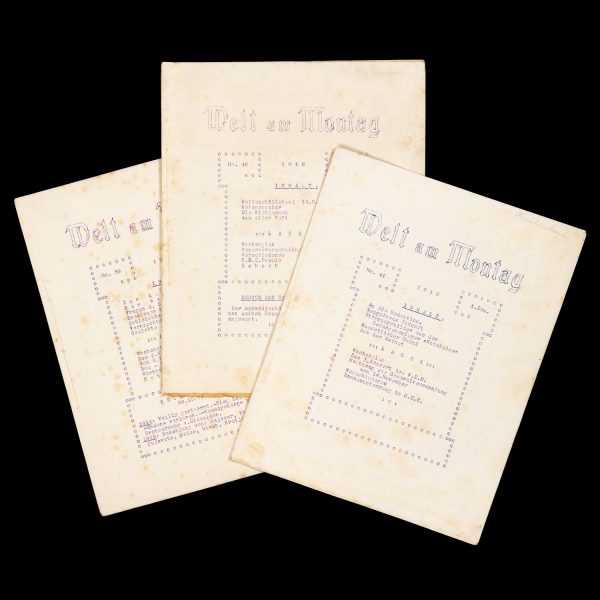 Based on internal evidence in this archive, we have tentatively identified its compiler as Kurt Reichenbach (1890-1945), a German gymnast from Leipzig who had competed in the 1912 Summer Olympics in Stockholm. At the outbreak of World War One in August 1914, Reichenbach appears to have been either visiting or living in Singapore when he was arrested as an enemy alien and detained with other German and Austro-Hungarian subjects in the Tanglin Barracks – see item (6) below. Over the course of 1915 and the first half of 1916 most of these detainees were brought to Australia and interned at the Trial Bay camp, on the mid-north coast of New South Wales.

Trial Bay was the only Australian internment camp used to house enemy aliens captured or arrested overseas, not only in Singapore and New Guinea but also in other outposts of the British Empire in Asia and the Pacific, such as Ceylon, Hong Kong and Fiji. The first internees starting arriving there in August 1915. Trial Bay was also the internment camp designated for Germans of high social standing, including consular staff, academics, professionals and prominent businessmen.

In July 1918, when the Trial Bay Camp was closed down, Reichenbach and his fellow internees were transferred to the Holsworthy Camp at Liverpool, southwest of Sydney. Reichenbach’s official mugshot photograph, showing him holding up his prisoner number, 4888, appears in an ‘Album of identification photographs of enemy aliens (civilian and Prisoner of War) interned at Liverpool Camp, NSW during World War 1‘, held in the National Archives of Australia.

After the war Reichenbach returned to Germany, where he became the proprietor of an inn, the Sächsischer Hof, near Freiberg in Saxony – just 50 miles from his birthplace, Leipzig. He served as a captain in the German army during World War Two, but died in a Serbian POW camp after the war had ended, in December 1945.

The Trial Bay camp newspaper, Welt am Montag, was published weekly or fortnightly from 1 October 1917 to 22 December 1918. It was the only internment camp publication in Australia during World War One which was not subject to censorship by the authorities.

(2). Die große Offensive 191. Kriegswoche. [Trial Bay, NSW : German Concentration Camp internees, March or April 1918]. A camp-printed report on the current military situation on the Western Front, including details of German “victories”; 22 pp, mimeograph printed. In identical format to Welt am Montag, and like the camp newspaper, not subject to censorship. Appears completely unrecorded.

In addition to the Trial Bay camp publications outlined above, this group comprises the following pieces of ephemera collected by internee Kurt Reichenbach:

(4). [Paul Dubotzki, attributed]. [1916-1918]. [Interior of one of the buildings at Trial Bay gaol which was used as a storage room for the internees’ luggage; two internees pose in the midst of assorted travel trunks and crates]. Silver gelatin print photograph, 160 x 210 mm; unmounted, mild corner wear.

(5). Three small snapshot photos (largest 90 x 120 mm), taken in Germany in the late 1920s; two show Kurt Reichenbach and his wife (or sister?) and have pencilled captions verso identifying him as the owner of the Sächsischer Hof; the third is a group portrait of other family members, dated October 1927.

(6). Cutting from a German periodical (published in 1915 or 1916?), 130 x 245 mm, with a captioned photographic illustration of the German gymnastics team at the internment camp in Tanglin Barracks, Singapore, shown marking the Kaiser’s birthday on 27 January 1915. The caption points out, with a white “X”, Julius Lauterbach, commander of SMS Emden, who would escape from Singapore just a few weeks later during the Sepoy mutiny in February 1915. Lauterbach managed to make his way back to Germany, where he published his memoirs in 1917. A crucial detail in this group photograph is that the man directly in front of Lauterbach, kneeling and holding up the Turnerschaft (Gymnastics Team) shield, appears to be none other than Kurt Reichenbach, based on comparison with the National Archives mugshot and the snapshots in item (5). The cutting is housed in a glazed timber frame from the WWI period which has a Singaporean silk fabric covering; the back of the frame has a later pencilled ownership inscription ‘Freiberg / Elise Reichenbach / Sächsischer Hof’. Presumably Reichenbach brought this souvenir of the Singapore internment camp with him to Australia when most of the Singapore prisoners were relocated to Trial Bay, probably in 1916.

The internment camp for enemy aliens at Trial Bay, on the mid-north coast, was one of several such camps in New South Wales during World War One. Others were located at Berrima, Bourke and Molonglo, with the largest being at Holsworthy, near Liverpool. Like the camp at Berrima, the one at Trial Bay was a converted jail. It was closed in July 1918, when its detainees were moved to Holsworthy Camp in anticipation of the end of the war.

‘At Trial Bay the elite of the German civilian internees were confined. Among them were professionals, academics, businessmen and the German Consuls from New South Wales, Queensland, Tasmania and Western Australia. Many of the internees had lived in British Territories of South East Asia. A remarkable feature of the Trial Bay Camp was its cosmopolitan atmosphere…

The interned Consuls and officers were accommodated in wooden barracks that were located between the walls and the main building. Towards the end of 1916, they were moved to wooden barracks on the outside, to the left of the Gaol overlooking Trial Bay. The Australian Government did not provide all the blankets and bedding required until many weeks after the internees arrived.

To fill in the day the internees fished, swam, played tennis and walked, often outside the Gaol walls within an area fenced in by wire laid across the peninsula. The gates to the Gaol were opened at 6am and closed at 6pm. At night the internees slept in the unlocked Gaol cells (two per cell), and in wooden barracks built between the walls and cell blocks and in tents on the grounds. Additional huts were erected by the internees outside the walls, and huts were built above the beach for recreational use during the day.

The main building formed the hub of the Trial Bay Camp. In the main building were the kitchens and dining room. The two story cell blocks jutted out at 45 degrees from this. The imposing walls were complete with watch towers and a gate house surrounded the Gaol buildings. The Australian military authorities promoted segregation of the internees according to rank and status. The officers were given separate sleeping, dining and mess rooms in the barracks outside the Gaol.

Until September 1917, the internees were supplied with the same rations given to Australian soldiers. From September onwards these were reduced to ‘Imperial Rations” based on the rations supplied to Prisoners of War in Britain. The official rations were basic but adequate. However the internees had other sources of food such as vegetables from the internees’ garden and fish caught at the beach and other items sold at the canteen. There was a gourmet restaurant at the Camp named ‘The Duck Coop’ that was run by an entrepreneurial restaurateur. It offered fine food to internees who could afford it.

The activities of the internees transformed Trial Bay into a thriving place for sport and culture. Leisure as well as competitive sporting activities were organised by a number of private clubs. The Turnverein athletics club had the largest membership. The boxing, bowling and chess clubs also drew large crowds. Two choral societies performed German folksongs.

While the freedom allowed to internees created a holiday spirit there was another side to daily life in the Camp. This was the experience of forced confinement and boredom. The shock of life in Gaol cells created a new identity for men who had been removed from their communities and families. Most of the internees experienced feelings of isolation, lack of privacy and monotony …

The relations between the internees and the Camp guards were formal and tense. Unlike the men at Berrima who lived in the naval regimentation of Officer and sailors, the Trial Bay internees were more inclined to protest. This generated ongoing conflict between internees and the guards.

In January 1916, the internees went on strike after one described by the guards as an ‘unceasing trouble maker’ was sent to Holsworthy for a minor incident…

The Camp’s newspaper Welt am Montag (World on Monday) played an important role at Trial Bay and was the only known publication of its kind in Australia at the time free from censorship, which highlights the extraordinary status and special privileges of the Camp. The circulation was by subscription and restricted to the camp.’ (Migration Heritage NSW)