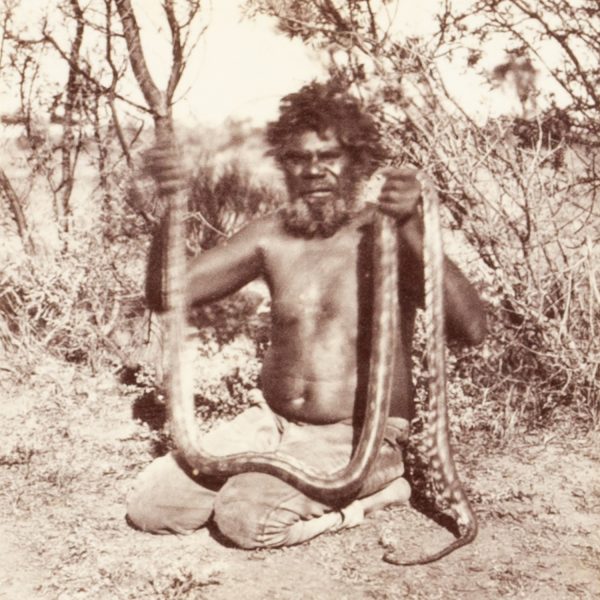 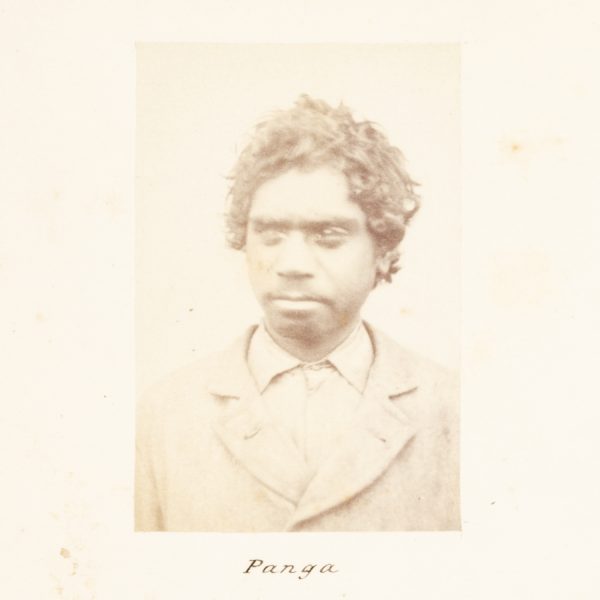 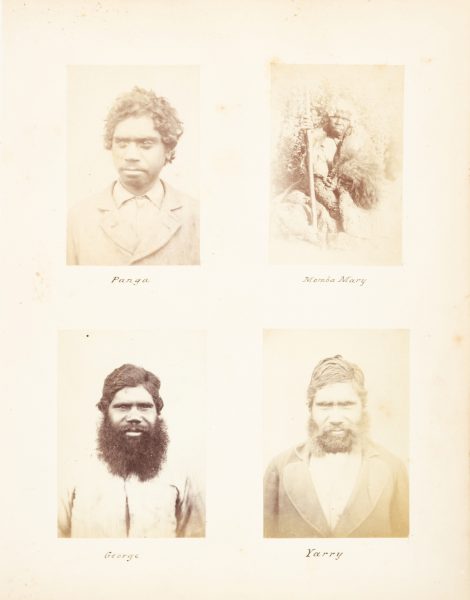 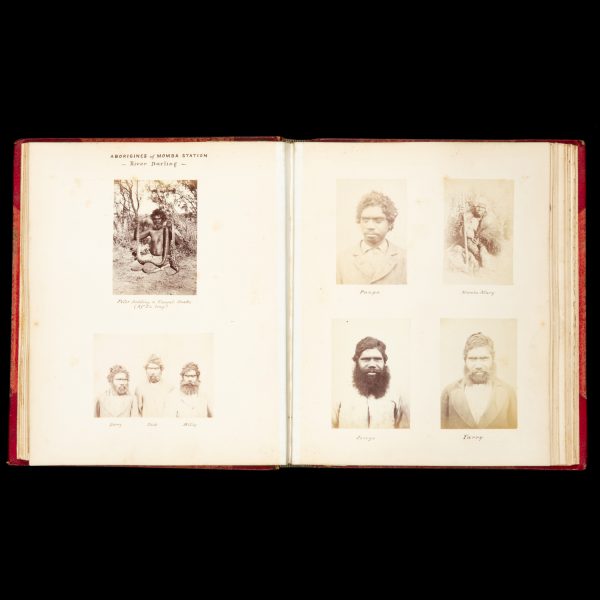 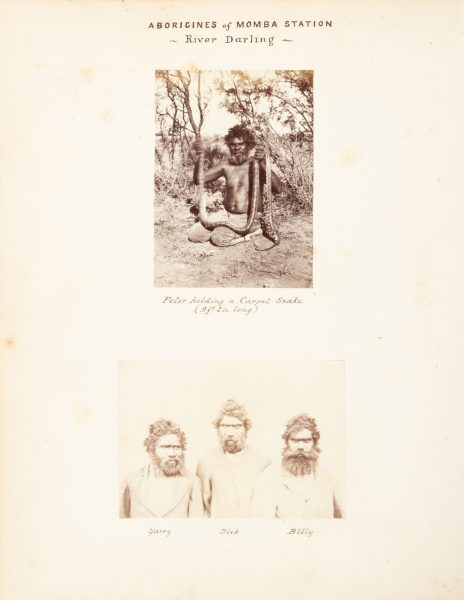 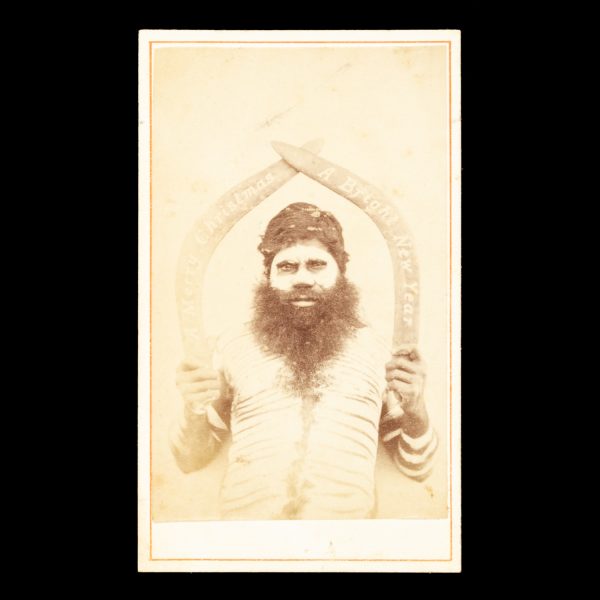 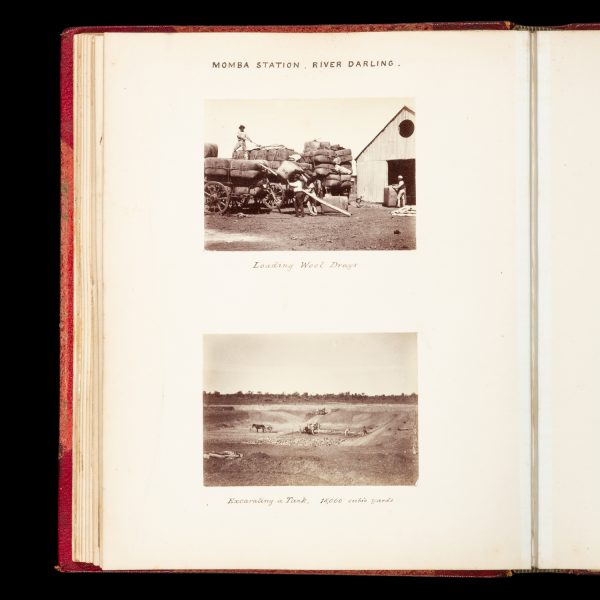 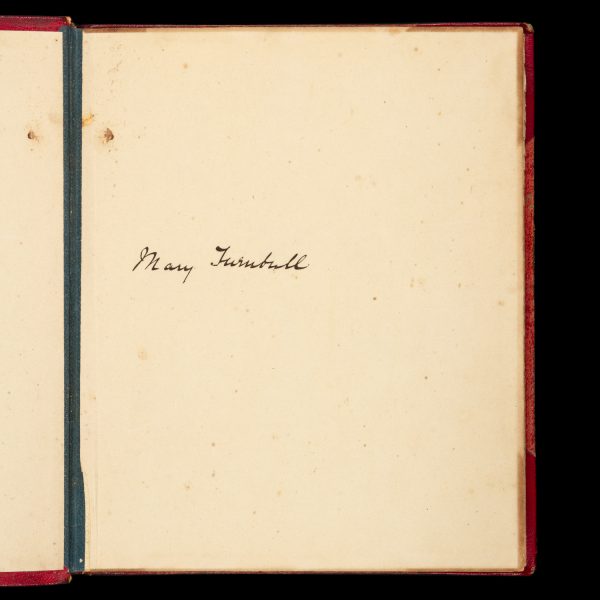 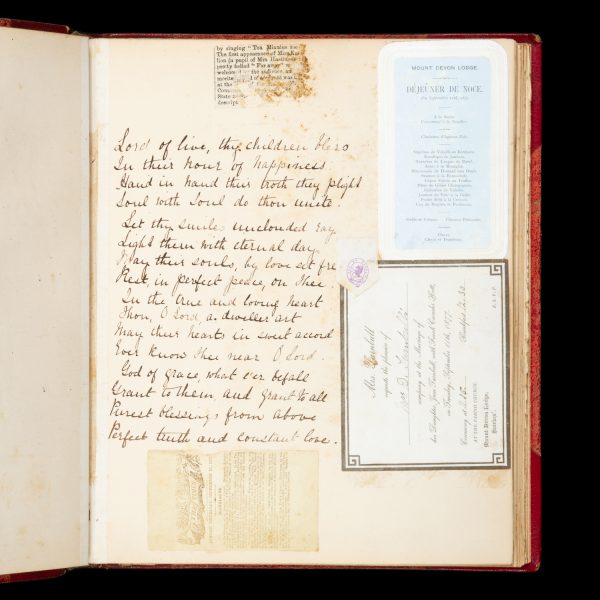 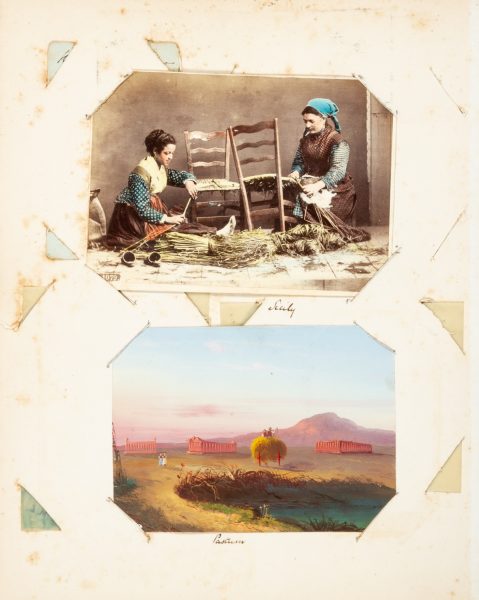 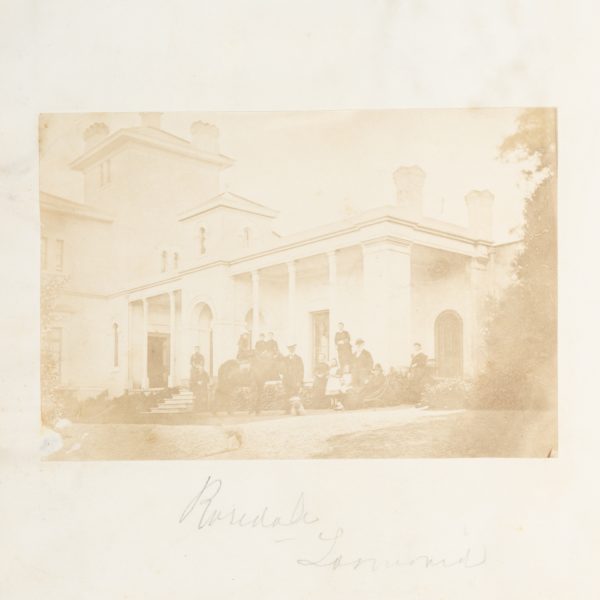 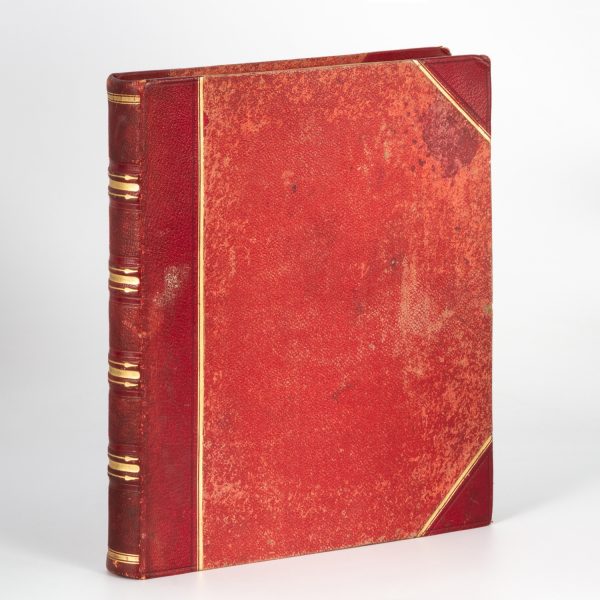 Album 1. Quarto (280 x 220 mm), gilt-ruled half brown morocco over tan pebbled cloth boards (detached from contents), upper board with the initials ‘M. T.’ stamped in gilt, spine with raised gilt bands; all edges gilt, front pastedown with binder’s ticket of Charlwood & Son, Bourke Street, Melbourne; [85] leaves (thickish paper stock, the last 20 blank), with approximately 200 mounted albumen print photographs and items of printed ephemera, plus numerous watercolour, gouache or pen and ink sketches, as well as several manuscript entries; the contents seem to cover the period 1876-1877, among the earliest items being a Tennyson poem, ‘The Princess’, written out from memory by Mary Turnbull with the date January 11th 1876 and accompanied by a photographic view of Bourke Street, and a poem by M. F. Tupper, ‘Friendship’, also written from memory by Mary and dated ‘Port Albert [Gippsland], March 30th 1876’; another manuscript poem, dedicated to ‘M. G.’ (i.e. Mary Gellion, Mary’s maiden name) is written by a Scottish poet from Edzell, identified only as ‘J. G.’ (possibly one of her Gellion relatives?) and is dated at Edzell, October 1876; there are many photographic and printed souvenirs from a European Grand Tour that included visits to Portugal, Italy, France, England and Scotland, and Egypt, including a pen and ink sketch of the Bois de Boulogne, Paris, which is inscribed by Mary ‘done by Mr. Leake’ (Tasmanian Arthur Leake, Mary’s second husband – see below); the last few pages include albumen prints of Hobart Town and of Rosedale, the family seat of Tasmanian pastoralist John Leake, Arthur Leake’s father, showing the Leake family assembled outside, and a photographic portrait (90 x 58 mm) of Letitia Sarah Leake of Glencoe Station, near Mount Gambier (Letitia was the young ward of Arthur Leake – see below) posing with a boomerang, plus views of Mount Gambier. Condition of contents: scattered foxing; fore-edges of several leaves with rodent damage. The albumen prints of Rosedale and of Letitia Leake have both lost some contrast.

Album 2. Quarto (305 x 260 mm), gilt-ruled half scarlet morocco over red pebbled cloth boards (flecked and stained), spine with raised bands in gilt; all edges gilt, front free-endpaper with ownership inscription in ink Mary Turnbull; [35] leaves (heavy card stock) with approximately 200 mounted albumen print photographs and items of printed ephemera, plus numerous watercolour or gouache sketches and pressed flowers (many with captions), as well as several manuscript poems; the contents mostly comprise material collected on trips from Australia to England and Europe between 1877 and 1887, including souvenirs of at least one Grand Tour taking in Spain, Italy, Sicily and Switzerland, with photographs of classical and Renaissance artworks, personalities of the day such as royalty, politicians, theatre and opera performers, and ethnic types, and mementos of a Turnbull family wedding in Yorkshire in September 1877; one particularly exquisite watercolour of flowers is captioned by the artist Greetings from Rosedale (the family seat of Tasmanian pastoralist John Leake, Mary’s second father-in-law). By far the most significant section in the album is, however, a sequence of eight albumen print photographs (largest size 80 x 115 mm) by Frederic Bonney taken on Momba Station, near Wilcannia, northwestern New South Wales, which are mounted on three consecutive pages towards the front of the album. The first six of these photographs are portraits of Paakantyi people – displayed in a neatly laid out double page, with a captioned title on the mount Aborigines of Momba Station, River Darling and with further individual captions identifying all of the subjects by name: Peter holding a carpet snake (9ft 2 in long) (this image previously unknown); Yarry, Dick, Billy; Panga; Momba Mary (this image previously unknown); George; and Yarry. The following page has the caption title Momba Station, River Darling, above two outdoor views captioned Loading wool drays and Excavating a tank, 15,000 cubic yards. A ninth Bonney photograph, printed in carte de visite format (105 x 60 mm) and designed as a Christmas card, is slit-mounted (i.e. it is fully removable) on a later page. This extraordinary (and perhaps unique?) image – previously unknown – shows Paakantyi man George (clearly identifiable from his portrait in the earlier sequence) wearing ceremonial body decoration and holding up a pair of boomerangs which have handwritten captions in the negative A Merry Christmas and A Bright New Year, respectively. The reverse of the carte de visite is inscribed by the photographer with his name in green ink, Frederic Bonney. Condition of contents: scattered foxing; the Bonney photographs have all survived remarakably well, some with slight loss of contrast.

Bonney emigrated to Australia from England in 1865, joining his brother, Edward, on Momba Station near Wilcannia. (Momba is notable for Charles Dickens’ son, Plorn, having worked on the station as a stockman between 1868 and 1872). Frederic was primarily a grazier but he was also a talented amateur photographer with a keen interest in ethnology. With his camera he extensively and empathetically recorded the local Paakantyi people. (See Hope, Jeannette and Lindsay, Robert. The people of the Paroo River: Frederic Bonney’s photographs. Sydney South, N.S.W. : Dept. of Environment, Climate Change and Water NSW, 2010). Edward returned to England in 1879, suffering from terminal syphilis; Frederic then managed Momba single-handedly for two years before finally selling up and returning to England permanently in 1881.

The National Museum of Australia holds an album containing 135 drawings from the 1870s and 80s by Panga, a young Paakantyi artist from Momba station. The album also contains five photographs – four of Panga, and one of Frederic Bonney, who compiled the album. The six Aboriginal portraits in Mary Turnbull’s album include one of the young artist, Panga; his older brother, Yarry, also appears in two of the photographs.

How these important photographs taken by Frederic Bonney at Momba came to be in Mary Turnbull’s album is unclear. We have been able to establish Mary’s connection with all of the other photographic subject matter and ephemera in the albums, including her relationship to Letitia Sarah Leake and Mount Gambier through her second marriage (see below); however, the presence of the carefully mounted and meticulously captioned group of Bonney photographs remains unexplained. The level of detail in the captions – which it appears were written by someone other than Mary, if we compare the handwriting with her many entries throughout the albums – suggests that the photographs were acquired in situ, by someone who had met first-hand the people pictured. The Frederic Bonney carte de visite Christmas card points to a personal connection between the grazier-photographer and Mary Turnbull – probably through her second husband, Arthur Leake, or his brothers Edward and Robert, all of whom were pastoralists (see below).

Mary, the compiler of these albums, was born in Red Bluff, far east Gippsland (then in the Colony of New South Wales) in 1841, the eldest of 11 children of Scottish immigrants from Inverness, John Gellion and Isabella (Farquhar) Gellion, who had arrived in Port Phillip in 1840. Her father drove cattle overland from Melbourne to Port Albert, South Gippsland, in 1844. Gellion’s journey was one of the first such cattle drives east from Melbourne, and he established a cattle station, ‘One Tree Hill’, on the banks of the Albert River.

In 1861 Mary married Scottish-born David Turnbull (1827-1872), a prosperous shipowner and prominent citizen of Port Albert. With his brother Robert, David was a partner in Turnbull Bros. & Co. and the Port Albert Navigation Company. David died at Port Albert in 1872, aged 45.

As an independently wealthy widow, Mary travelled to Europe for the first of at least two Grand Tours that she would make, and to England for a Turnbull family wedding in September 1877. During this trip she married in London Arthur Leake (1815-1890), the fabulously wealthy eldest son of pastoralist John Leake of Rosedale, Tasmania, whom she had evidently met on a trip to Europe in 1876 (based on internal evidence, the sketch of the Bois de Boulogne ‘done by Mr. Leake’ in one of Mary’s albums would seem to date to 1876).

After Arthur’s death Mary spent the last part of her life in Melbourne. She died at her magnificent Toorak residence, Studley, in 1920.

Arthur’s brothers, squatters Edward and Robert, had established Glencoe Station near Mount Gambier in the South East of South Australia in 1844. Glencoe grew into a vast pastoral empire. On Edward’s death in 1867, Arthur Leake became the guardian of Edward’s young daughter Letitia Sarah (1859-1923). Letitia was brought over to Tasmania to live with the Leakes, who disapproved of her mother’s heavy drinking to such an extent that they even had her confined in the lunatic asylum at New Norfolk. Letitia received her education in Tasmania, first at a school and later with a governess. She was, at her mother’s insistence, instructed in the Catholic faith, despite the fact that the Leakes were staunch Anglicans. Letitia would somewhat controversially become the sole beneficiary of the massive Glencoe estate. Her mother received only a small annuity and her younger brother, John, received nothing. In 1895, after her marriage to Sydney solicitor Charles Billyard, Letitia settled in England. During World War One she famously signed over her Middlesex property, Harefield Park, to the Australian Government for use as Australian Auxiliary Hospital No. 1 to treat wounded ANZACs, and assisted in the convalescence of over 50,000 soldiers.

In the mid nineteenth century, Glencoe Station had achieved notoriety for the numerous episodes of extreme violence and abuse that were perpetrated by its employees against the local Aboriginal population. It is somewhat ironic, then, that the portrait of Letitia by an unidentified photographer shows her posing with a boomerang. (See the recently published biography of Letitia Leake, The Accidental heiress : Journey of a Glencoe squatter’s daughter, by John Berger and Carol Grbich. National Trust of South Australia, 2020, which features the photograph of Letitia holding a boomerang as the cover illustration).