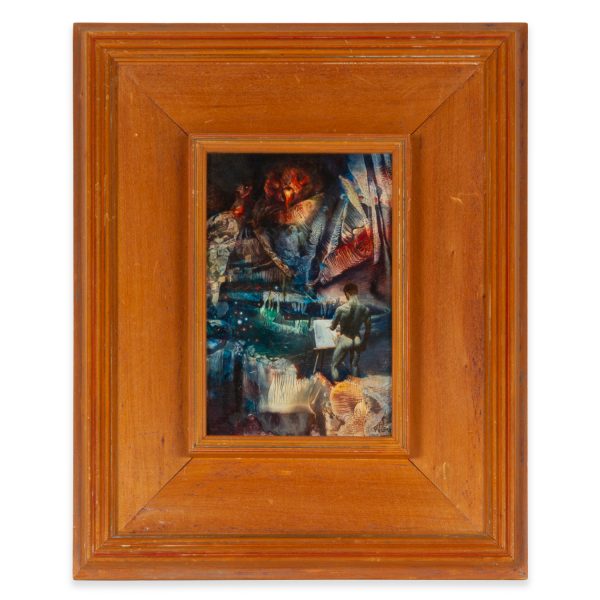 A rare and important example of Gleeson’s surrealism, gifted to Edward M. Smith and his wife Honor with an affectionate and playful inscription in 1958. Smith was Gleeson’s art teacher at East Sydney Technical College, where he studied from 1934 – 36. An influential teacher, Edward Smith (or ‘Blacksmith’, as he was known by his students) also taught Douglas Dundas and Justin O’Brien, who both reflect on their teacher with fond memories in their interviews given to James Gleeson at the National Gallery of Australia in 1978. The gift is a meaningful one, from Gleeson to his teacher during the period of his first formal training in painting. The subject is an artist at his easel, attempting to capture on canvas the vastness of the world, both real and surreal.

‘Renowned as Australia’s foremost surrealist painter and poet, James Gleeson’s oeuvre explores the human condition beyond visible reality and the limitations of the senses through powerful enigmas of fleshy biomorphic, mechanical and illusionistic landscape forms. In addition to his contributions to surrealism, throughout his career Gleeson made important contributions to the Australian art world as a dedicated writer, critic and affiliate of a number of art institutions.’

Gift of the artist to Edward and Honor Smith.