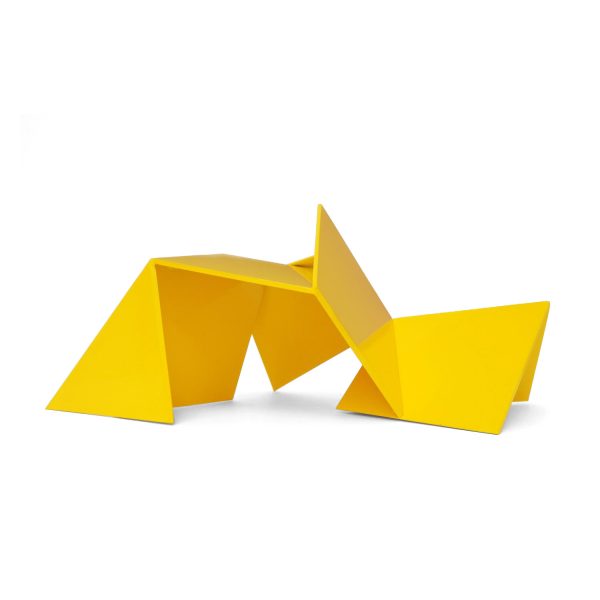 An icon of Melbourne public art.

‘On 1st May 1980, Ron Robertson-Swann’s Vault made its way to Melbourne’s new City Square. This year marks the 40th anniversary of the sculpture’s installation.

Almost immediately after its installation, the backlash against Vault was rife.  Journalists, cartoonists, and columnists, among others, surged to the media with letters of opposition and awe, to antagonize and support the luminous work, nicknamed the ‘Yellow Peril’.

Few artworks have been involved in such a conflict – indeed, such a culturally and morally divisive controversy hadn’t been seen since the Dobell affair in the 40s or the Blake Prize awarded to Rapotec’s Meditating on Good Friday in the 60s – and certainly in Australia no other public work has been the centre of such zealous uproar.

Eventually, about a year later, the work was removed in the dead of night and re-located to a part of the city few people frequented.  Aesthetics aside, this brought up issues of Artists’ moral rights (the work was site-specific and its removal potentially undermined its integrity) and of Artists’ legal rights (as to whether the removal constituted a breach of contract and caused damage to the artist’s reputation).  These are issues that have achieved greater attention in the years since and form an important part of Vault’s legacy.

Forty years down the track, Vault has emerged not just as one of Melbourne’s icons but arguably as the best known public sculpture in Australia. The now eponymous ‘Swann yellow’ and the tensely balanced diagonals of its hard-edge geometry have been re-called, borrowed and extended by architects and designers across Australia.  Robertson-Swann, who celebrates his 80th birthday next year, muses that all artists have a “living dream of influencing society beyond their work” and, through Vault, the realisation of his dream continues on.

As Geoffrey Wallis wrote, the row over Vault gave birth to “an awareness of the pitfalls, challenges and rewards that new art can bring, and acted as a catalyst for change.” – Charles Nodrum Gallery