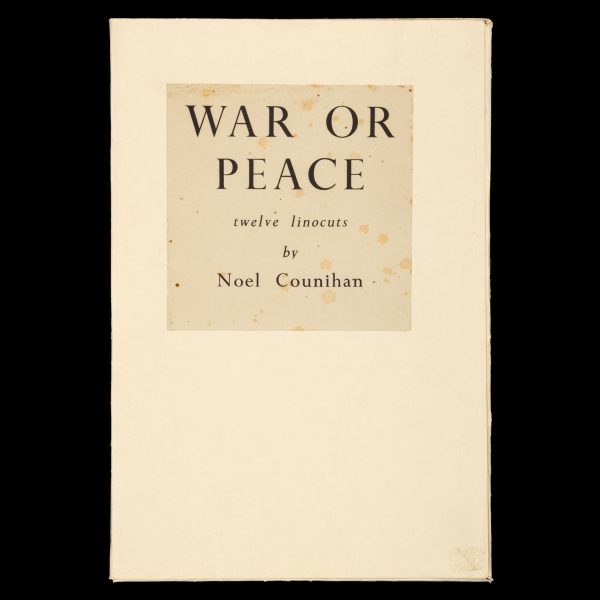 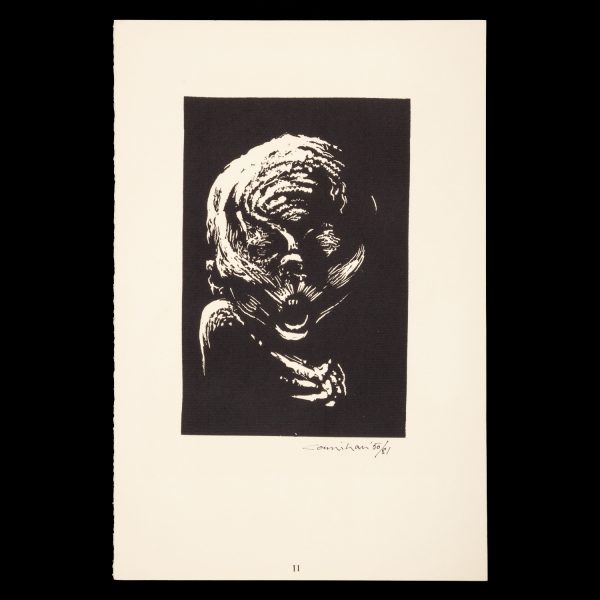 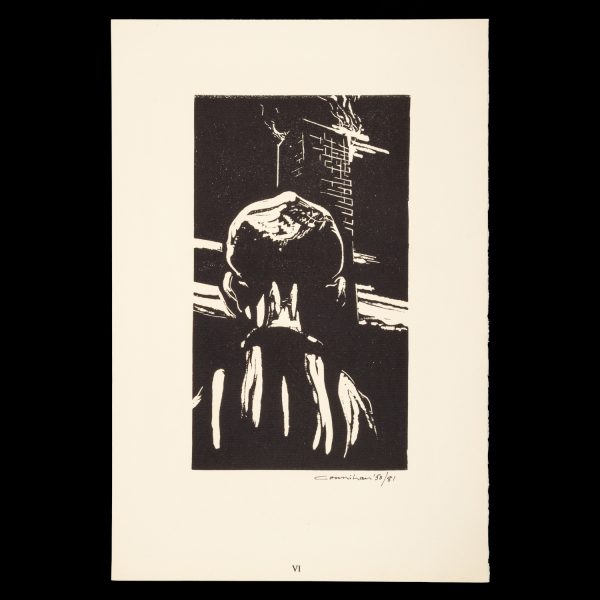 London: Collet’s Holdings Ltd., 1950. Later lettered paper portfolio (385mm tall), cut lettering from the original folio pasted on (foxed), 4pp. letterpress (long split along fold), twelve linocuts on separate sheets, very good examples. Limited to 300 copies signed by the artist, this is number 88. In this example, each linocut has been signed by the artist, and dated ’50/81 (created in 1950, signed in 1981). Rare.

‘In this set of lino-cuts he illuminates the terrible fears and the impatient hopes of mankind in their daily struggle with the danger of war. They are a proud justification of the confidence of his Australian friends in his continuation of clear vision and optimism’ – James Boswell. Foreword to War or Peace.

When Jack Lindsay saw Counihan’s powerful linocuts folio in London in 1950, he was moved to write a poem to accompany each of them. These poems, along with reproductions of the Counihan originals, together with some additional poems by Paul Eluard and Pablo Neruda, were published later the same year, again by Collet’s Holdings, as a booklet titled Peace is Our Answer. Born in the aftermath of the Second World War, the booklet bore a dedication to the Second World Peace Conference in Warsaw, and the original linocuts from this folio War or Peace were exhibited there in Poland, as well as Counihan’s 1951 exhibition in London (DIMMACK, Max. Noel Counihan. Melbourne: MUP, 1974, p.49).

Counihan returned to Melbourne in 1953, and exhibited these linocuts at Tye’s Gallery in a group exhibition with Vic O’Connor and James Wigley from 6 – 16 October that year. They received wide critical acclaim, the review in The Age writes ‘If the War or Peace series of lino-cuts are not a convincing social indictment, they succeed as art through brilliant disposition of black and white masses’. Counihan probably inscribed this set to Flora at the exhibition, sets were priced at three guineas a folio.

‘This folio of linocuts begins with a stark image of a mother cradling a child through the ruins left by war and ends with a group of stevedores striding confidently forward, pointing to the future. Between these two images are ten linocuts, all of which make clear Counihan’s political and artistic focus. Here is a work which stands full of humanism and the belief that humanity is yet to see its golden age. In these linocuts we can see all those European influences that drove the Neue Sachlichkeit movement in Germany. There is George Grosz, Max Beckmann, Otto Dix and especially Kathe Kollwitz.‘ – Monica Oppen, Artists’ Books : an exhibition hosted by Rare Books, 28 September – 25 November 2011. Monash University Library, 2011, p. 3.

In 1979, Melbourne private press publisher Richard Griffin produced a new edition of the work, again titled War or Peace. It was a very different style of publication, housed in a half-calf binding and  matching slipcase in line with the emerging trend for deluxe editions, rather that the plain wrappers of both the 1950s editions. The 1979 War or Peace is really a reissue of Peace is Our Answer, as it contains reproductions of the original linocuts along with the various poems, which Lindsay and others wrote inspired by the original linocuts.

Of three publications, this is the first, and only, to contain original graphics. The limitation of three hundred seems generous, yet the work is known in only a handful of examples, no doubt as the vast majority of folios were split up, in fact even at Counihan’s own exhibitions the linocuts were for sale individually. The only collections we can locate the work in are the National Gallery of Australia and State Library of Victoria. The impact of the folio has been wide, however, due to the release of the 1950 and 1979 editions which reproduce the linocuts.

This is the only set we have identified with the artworks individually signed by the artist. As they are dated 50 / 81, they were probably exhibited / sold at the time of the launch of Robert Smith’s catalogue raisonné in 1981.

A rare, significant and influential work by one of Australia’s greatest social realists.