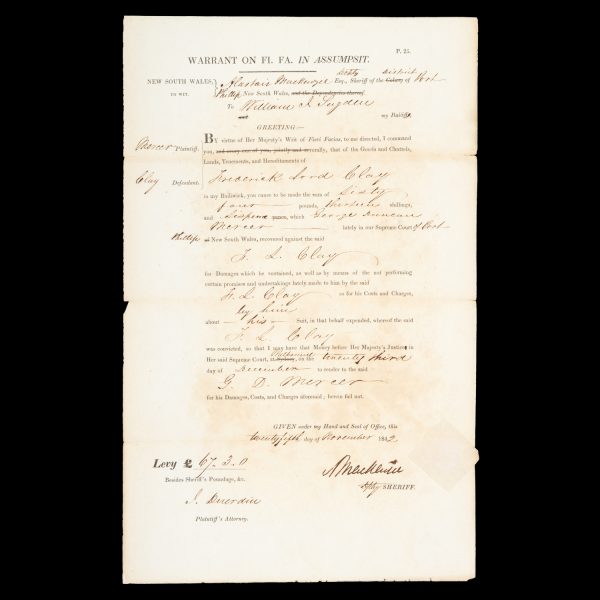 Sydney : W. J. Rowe, Government Printer, [1842, or earlier]. Foolscap folio (335 x 210 mm), single sheet printed recto only, with manuscript entries, a warrant on Fieri Facias In Assumpsit empowering William Johnson Sugden, the Deputy Sheriff’s Bailiff, to recover the sum of £64 13/- 6d in damages and costs from Frederick Lord Clay, owed to the plaintiff, George Duncan Mercer, as ruled in the Supreme Court of the Port Phillip District, and to be delivered to the Court before 23 December 1842; the document is dated 25 November 1842; embossed court seal at lower right; signed by Mackenzie and countersigned by the plaintff’s attorney, John Duerdin, at the foot; verso with clerical summary ‘Mercer Plaintiff / Clay Defendant / Warrant on Fi. Fa. / Duerden Plaintiff’s Attorney, annotated ‘nulla bona’ (i.e. there were no goods that could be seized in order to satisfy the court order); original folds, fine.

William Johnson Sugden (c.1804-1868) was one of the most notable early Port Phillip colonists. A portrait of him by Thomas Foster Chuck was published in Chuck’s The explorers and early colonists of Victoria (1872). Sugden, formerly a soldier in the Life Guards and attendant to George IV, arrived in Australia in 1834. He lived in Hobart where he was the licensee of the Dorchester Butt Hotel in Campbell Street, between September 1835 and May 1836, before being declared insolvent. He left Van Diemen’s Land to try his luck in the new settlement at Port Phillip, and records show that in 1839 he became the first secretary of the Melbourne Union Cricket Club and a founder of Odd Fellows Lodge. In 1841, Sugden was appointed Sheriff’s Bailiff, and the present document dates to this period of his career. During 1842 and 1843 he is also recorded as being an auctioneer and burgess (councillor) for Burke Ward, with a residence in William Street. In 1843, William Johnson Sugden married Louisa Frost at St James’ Cathedral, and the following year he received the appointment of Chief Constable of Melbourne. During his time in this position, Sugden introduced the new English model of the modern police detective to Melbourne. An indication of the esteem in which he was held in Melbourne is that in 1850 he was Grand Marshal of the parade that celebrated the opening of Princes Bridge.

Alastair Mackenzie (1804-1852) was the nephew of Sir Hector MacKenzie, XI Laird of Gairloch, and the son of General John MacKenzie. He was a magistrate in the Bahamas before being appointed Deputy Sheriff of Port Phillip district in the colony of New South Wales at the beginning of 1842. In 1851 he was appointed Colonial Treasurer in the new colony of Victoria. However, he died within a year, in 1852 in Melbourne.